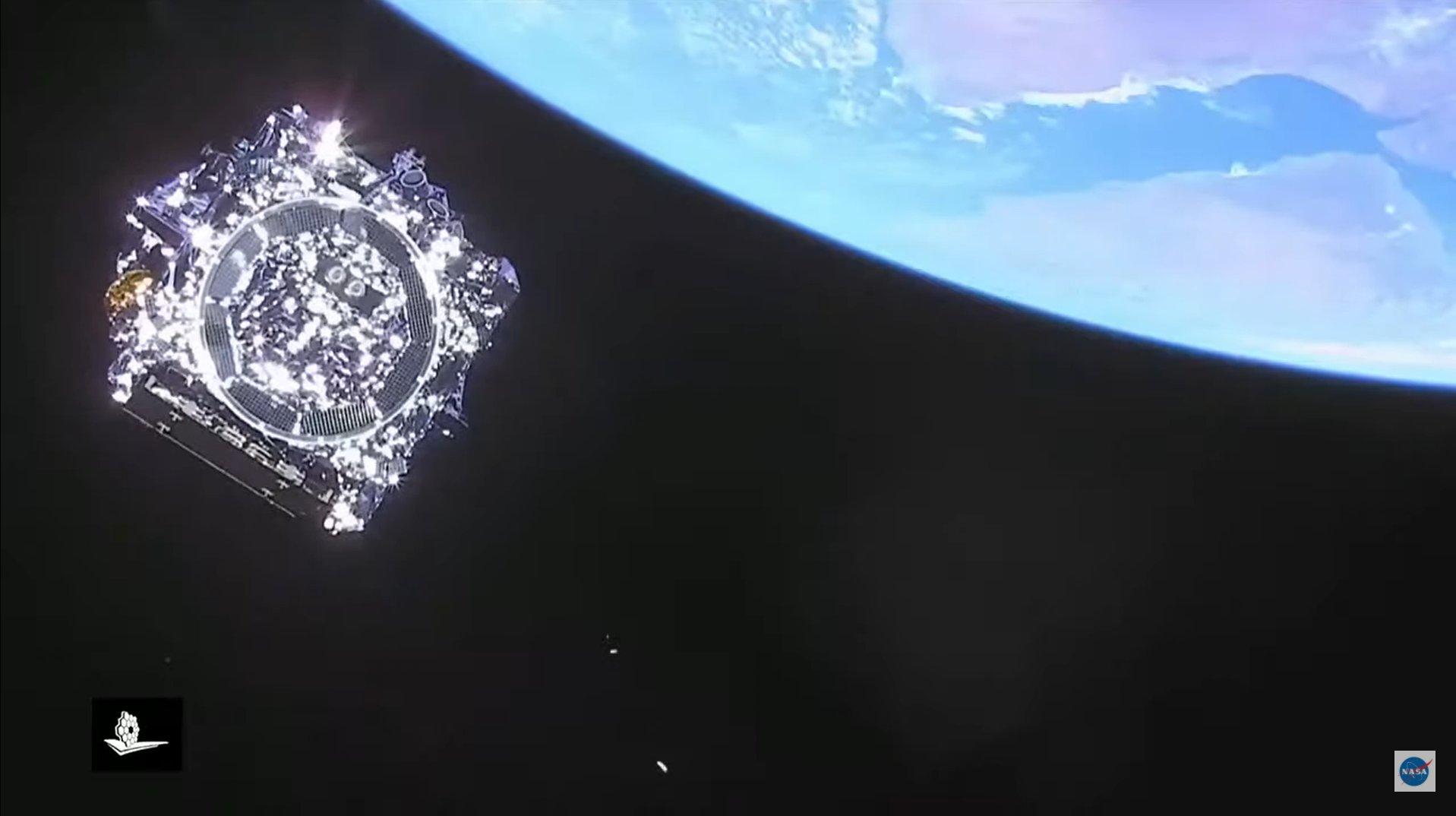 NASA’s next big space observatory is finally aloft, but it’ll be a while before it starts its highly anticipated science mission.

The $10 billion James Webb Space Telescope launched atop an Ariane 5 rocket from French Guiana yesterday (Dec. 25), kicking off a long-delayed, potentially transformative mission to study the early universe, nearby exoplanets and more. Telescope team members (and the rest of us) will have to remain patient, however, for Webb has a lot of work to do before it gets up and running.

The telescope is headed for the Sun-Earth Lagrange Point 2 (L2), a gravitationally stable spot 930,000 miles (1.5 million kilometers) from our planet in the direction of Mars. It’ll take 29 days for Webb to get there, and there will be lots of nail-biting action for the telescope along the way.

“The Webb observatory has 50 major deployments … and 178 release mechanisms to deploy those 50 parts,” Webb Mission Systems Engineer Mike Menzel, of NASA’s Goddard Space Flight Center in Greenbelt, Maryland, said in a deployment-explaining video called “29 Days on the Edge” that the agency posted in October.

“Every single one of them must work,” Menzel said. “Unfolding Webb is hands-down the most complicated spacecraft activity we’ve ever done.”

Webb has notched a few major milestones already. About half an hour after liftoff, for example, it deployed its solar panels and started soaking up energy from the sun. And last night, the big telescope performed a crucial 65-minute engine burn that put it on course for L2.

The following is a brief rundown of the big steps yet to come. (For more detail, see NASA’s Webb deployment site.) The timelines given are approximate; Webb team members have stressed that the deployment schedule is flexible, so don’t panic if the times and dates shift a bit, or if some things occur out of order.

One day after launch, Webb will rotate its high-gain antenna toward Earth to further facilitate communications with its handlers. A day after that, the spacecraft will perform another engine burn to refine its trajectory toward L2. And three days after launch, the pallet holding Webb’s huge sunshield — a five-layer structure designed to keep the infrared telescope and its instruments cool — will be lowered.

Each of the shield’s five sheets is about the size of a tennis court when fully extended, far too wide to fit inside the payload fairing of any currently operational rocket. So the sunshield launched in a compact configuration and must be unfurled.

This is an incredibly complex process. The sunshield structure has 140 release mechanisms, 70 hinge assemblies, 400 pulleys, 90 cables and eight deployment motors, all of which have to work properly for the five layers to deploy as planned, NASA officials said in the video.

The protective cover will come off the sunshield at five days after launch, and its booms will extend a day later. Sunshield deployment should be complete by eight days after liftoff, at which point team members will start shifting their focus to the optics.

At around 10 days after launch, Webb will extend its 2.4-foot-wide (0.74 meters) secondary mirror, which is so named because it’s the second surface that deep-space photons will hit on their way to the scope’s instruments.

It will then be time for Webb’s 21.3-foot-wide (6.5 m) primary mirror to shine. That mirror, which is composed of 18 hexagonal segments, launched folded up, as the sunshield did. Twelve to 13 days after launch, the mirror’s two side “wings” will extend and lock into place, giving the surface its full size.

At that point, Webb will be in its final configuration. The huge observatory will arrive at its destination slightly more than two weeks later, conducting another engine burn 29 days after launch to slip into orbit around L2, where a different set of ramp-up procedures will begin.

Two to three months after launch, for instance, the team will align the primary mirror segments so they act as a single light-collecting surface. This will be painstaking and time-consuming work, for the mirror has to be perfect to an accuracy of 150 nanometers. (For perspective: A sheet of paper is about 100,000 nanometers thick.)

“One of our scientists calculated that we move those mirrors literally slower than grass grows as we’re lining them up so incredibly precisely,” Webb Deputy Senior Project Scientist Jonathan Gardner, of NASA’s Goddard Space Flight Center in Greenbelt, Maryland, told Space.com earlier this month.

As this is happening, the team will also be testing and calibrating Webb’s four scientific instruments. That will be a laborious process as well; the goal is to start regular science operations six months after launch.

“We’re looking at the end of June,” Gardner said.

Webb’s observing time will be broken down into a variety of projects selected by peer review, as is done with NASA’s Hubble Space Telescope. The first year of Webb projects has already been selected, Gardner said, so the new observatory will hit the ground running when it’s ready to go.

“It’s going to be a wild ride,” Gardner said.