Mars is a parched planet ruled by global dust storms. It’s also a frigid world, where night-time winter temperatures fall to minus 140 C (minus 220 F) at the poles.

But it wasn’t always a dry, barren, freezing, inhospitable wasteland. It used to be a warm, wet, almost inviting place, where liquid water flowed across the surface, filling up lakes, carving channels, and leaving sediment deltas.

But then it lost its magnetic field, and without the protection it provided, the Sun stripped away the planet’s atmosphere. Without its atmosphere, the water went next.

Now Mars is the Mars we’ve always known: A place that only robotic rovers find hospitable.

How exactly did it lose its magnetic shield? Scientists have puzzled over that for a long time.

A magnetic shield is critical to preserving Earth’s atmosphere and habitability. Without it, Earth would resemble Mars. But Earth kept its protection, and Mars didn’t. So Earth is “rippling with life,” as Carl Sagan said, while Mars is likely wholly devoid of life.

Mars has a weak remnant of a magnetic field emanating from its crust, but it’s a feeble phenomenon that provides little protection.

The loss of its magnetosphere was catastrophic for Mars. How did it happen?

A new study published in Nature Communications tries to answer that question, like many studies before. The title is “Stratification in planetary cores by liquid immiscibility in Fe-S-H.” The leading authors are Kei Hirose from the University of Tokyo’s Department of Earth and Planetary Science and Ph.D. student Shunpei Yokoo in the Hirose lab.

So what happened to Mars?

“Earth’s magnetic field is driven by inconceivably huge convection currents of molten metals in its core. Magnetic fields on other planets are thought to work the same way,” Hirose said in a press release.

“Though the internal composition of Mars is not yet known, evidence from meteorites suggests it is molten iron enriched with sulfur. Furthermore, seismic readings from NASA’s InSIGHT probe on the surface tell us Mars’ core is larger and less dense than previously thought. These things imply the presence of additional lighter elements such as hydrogen.”

NASA’s InSIGHT lander struggled to meet all of its scientific objectives. But it has gathered some critical evidence regarding Mars’ interior structure. If InSIGHT’s results are correct, and if the implied hydrogen is there, there’s a basis for experiments that could reveal more about Mars’ lost magnetic shield. 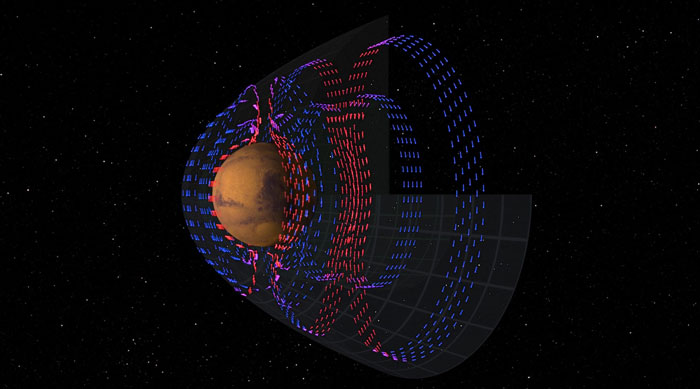 Above: A visualization of the electric currents around Mars. Electric currents (blue and red arrows) envelop Mars in a nested, double-loop structure that wraps continuously around the planet from its dayside to its night side. These current loops distort the solar wind magnetic field (not pictured), which drapes around Mars to create an induced magnetosphere around the planet.

“With this detail, we prepare iron alloys that we expect to constitute the core and subject them to experiments,” Hirose said.

Previous experiments investigated the behavior of planetary cores at differing pressures and temperatures. But they didn’t focus on hydrogen.

“Recent planet formation theories demonstrate that a large amount of water was delivered to both Mars and the Earth during their accretions, suggesting that hydrogen is possibly a major light element in the core,” the authors explain in their paper. “Despite its importance, so far the Fe-S-H system has been little investigated at high pressures.”

But if data from InSIGHT is correct, the hydrogen in the Fe-S-H core might play a role in the collapse of Mars’ magnetic field.

The researchers prepared a material sample matching what they think Mars’ core was once composed of. It contained iron, sulfur, and hydrogen – Fe-S-H. They placed the sample in a device called a diamond anvil, or diamond anvil cell (DAC).

The DAC can subject microscopic samples to pressures of hundreds of gigapascals. A laser heated the sample so that the conditions simulated Mars’ core. As the team subjected the sample to higher temperatures and pressures, they observed it with X-ray and electron beams to track changes in the material. Not only did the Fe-S-H sample melt, but it also changed its composition.

The experiment’s results center on the idea of miscibility. When materials are added together and create a homogenous mixture, they’re miscible. When materials are added together and don’t make a homogenous mixture, they’re immiscible. Fe-S-H’s immiscibility at high temperatures and pressures played a significant role in Martian planetary history.

“We were very surprised to see a particular behavior that could explain a lot,” Hirose said in a press release. “The initially homogeneous Fe-S-H separated out into two distinct liquids with a level of complexity that has not been seen before under these kinds of pressures,” said Hirose. “One of the iron liquids was rich in sulfur, the other rich in hydrogen, and this is key to explaining the birth and eventual death of the magnetic field around Mars.”

“While separated denser liquids stayed at the deepest part, lighter liquids migrated upward and mixed with the bulk liquid core, which could drive Martian core convection,” they write.

But in the region where the two liquids separated, something else happened. “At the same time, gravitationally stable, compositional stratification should have developed in a region where liquid separation took place. Eventually, Mars’ entire core became stratified, which ceased convection.” 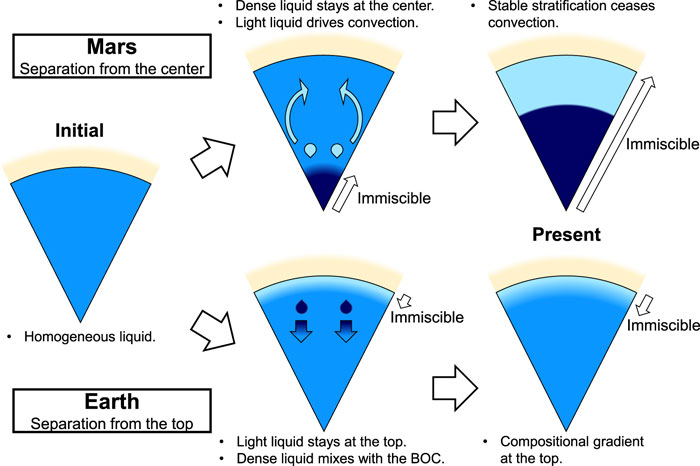 Above: This figure from the paper shows how Mars’ core and Earth’s core started similarly, then changed over time. Light- and dark-blue represent buoyant and dense liquids, respectively.

It also explains how it began. “The separation of immiscible S-rich and H-rich liquids could have been responsible for both the onset and termination of Martian core convection and dynamo action,” they write in their paper.

Once the two liquids separated, Mars was doomed. There was no more convection, no more magnetism, no more atmosphere, and no more water. The exact timeframe is unknown, but the result was a dead planet.

However, this is just one study, and we don’t have the complete picture. “With our results in mind, the further seismic study of Mars will hopefully verify the core is indeed in distinct layers as we predict,” said Hirose. “If that is the case, it would help us complete the story of how the rocky planets, including Earth, formed and explain their composition.”

We know Earth won’t remain habitable forever. In about 5 billion years, the Sun will enter its red giant phase and destroy the Earth. But our protective magnetic shield won’t last forever, either, and we’re doomed without it. What will happen first? Doom by loss of magnetosphere? Or doom by a red giant?

“And you might be thinking that the Earth could one day lose its magnetic field as well,” Hirose said, “but don’t worry, that won’t happen for at least a billion years.”

So we have a billion years. Let’s not waste it.