Earlier this year, the discovery of a potentially hazardous asteroid took astronomers on a roller coaster ride.

On 6 January 2022, astronomers at the Mount Lemmon Observatory in Arizona discovered an asteroid roughly 70-meters (230 ft) across. Based on their initial observations, it appeared this object – called ‘2022 AE1‘ – could potentially hit Earth on its next pass, on 4 July 2023.

Since any uncertainties in an asteroid’s orbit are highest in the hours just after its discovery, astronomers at several different observatories scrambled to make follow-up observations – which usually rule out any future impacts.

However, based on the first seven nights of observations, the chance of impact appeared to increase. Asteroid 2022 AE1 was flagged for a potential future impact by the Asteroid Orbit Determination (AstOD), an automated system astronomers around the world use to assess the asteroid risk.

Furthermore, the asteroid was given one of the highest rankings on the Palermo Scale, a ranking which astronomers use to categories and prioritize impact risks. Both ESA and NASA published the information on their Near Earth Object (NEO) information portal websites, allowing anyone – such as interested amateur astronomers – to take a look.

Even more worry-inducing was the following week, where no observations could be made because the full Moon blocked out any views of this asteroid from Earth.

But thankfully, when the asteroid was able to be tracked again, the accumulating data on the asteroid’s path revealed the chance of impact was dramatically decreasing over time. It has since been confirmed that 2022 AE1 will not impact Earth any time in the foreseeable future.

“It was a thrill to track 2022 AE1 and refine its trajectory until we had enough data to say for certain, this asteroid will not strike.”

So, exactly how were astronomers able to rule out a threat that initially seemed so certain?

The very first observation of an asteroid is just one data point, a single dot of light in the sky. At this point, it’s not clear what it is or where it’s going. Micheli explained that a second observation is needed to reveal an object in motion, and at least three are needed to determine an orbit – where it is going and how fast it is moving.

Further observations refine the orbit a little more, reducing uncertainties until astronomers can be sure of where it won’t go: primarily to Earth.

To help make these determinations, astronomers use computer simulations to calculate the future orbital path of the asteroid, and input randomly chosen initial positions and velocities that fall within the margin of error of the observations so far. By creating a large number of simulations, astronomers can calculate the probability that any particular path will actually hit Earth.

For example, if 1 million different possible orbits are simulated and just one of those leads to an impact, that means the odds of the asteroid hitting Earth are a million to one. 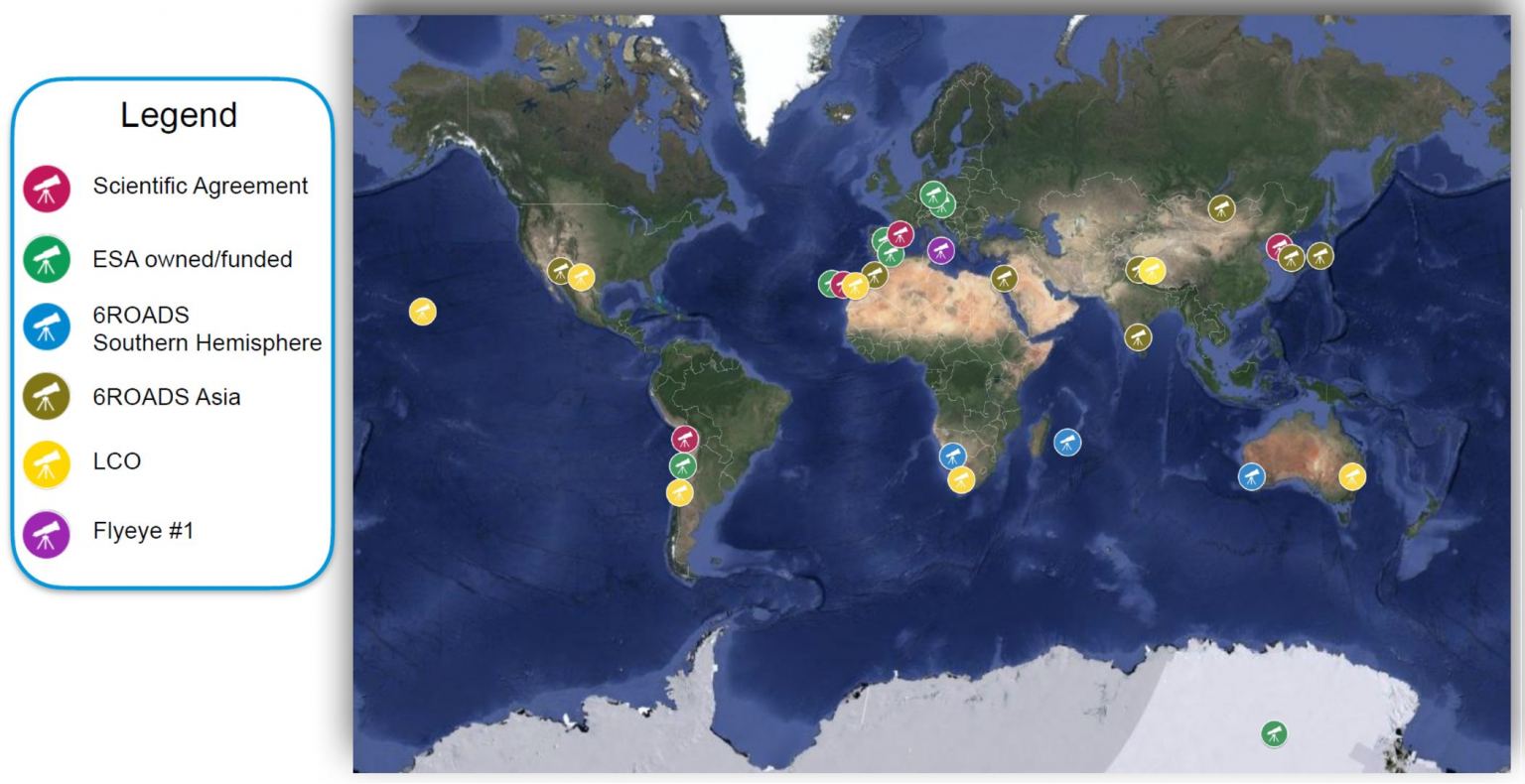 ESA has access to a global network of asteroid observing telescopes pillars. (ESA)

What usually happens is that with more observations and more data, the hazard zone narrows and the corridor of the asteroid’s future path moves away from Earth, dropping the risk percentage.

And with the network of observatories around the world that are focused on planetary defense – i.e., searching the skies for incoming asteroids and comets – multiple observations and quickly rule out any space rocks that aren’t a threat.

“The data was clear, confirmed the next morning by our counterparts at NASA – asteroid 2022 AE1 poses no impact risk,” said Laura Faggioli, near-Earth object dynamicist in the NEOCC who computed the orbit of 2022 AE1 throughout the observation period.

“Had 2022 AE1’s path remained uncertain we would have used any means possible to keep watching it with the biggest telescopes we have. As it was removed from our risk list, we didn’t need to follow it anymore – time to move onto the next.”

ESA said some keen observers will continue to monitor the asteroid, confirming the projections; we now know that in early July 2023, asteroid 2022 AE1 will fly by Earth at a distance of about ten million kilometers (+/- one million km) – more than 20 times the distance of the Moon.

So, although the odds of any one particular asteroid ever impacting Earth are quite low, it is still likely that one day our planet will be hit by an asteroid or experience a large airburst event like the Chelyabinsk meteor in 2013.

At the current calculated rate of impacts, astronomers expect about one large asteroid to impact Earth every 100 million years or so. For that reason, both professional and amateur astronomers continue to scan the skies.