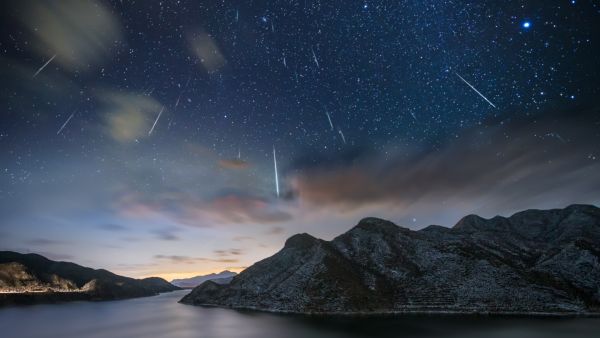 An old superstition suggests that if you wish upon a shooting star, your wish will be granted. The implication is that shooting stars are so rare, and your sighting so fortuitous, that you’ve been specially selected for a dose of good luck.

But are shooting stars actually all that elusive? And what are they, exactly?

A shooting star is a “common, if inaccurate, name for a meteor,” or a space rock that collides with Earth’s atmosphere, said Edwin Charles Krupp, an astronomer and director of the Griffith Observatory in Los Angeles.

Meteors that are called shooting stars appear as “a flash of light” to sky-gazers, Krupp told Live Science. “This light is the visible trail of gases in Earth’s upper atmosphere [that are] heated to incandescence by the high-speed passage of a meteoroid, or meteoric particle, intercepting the Earth.” Quite simply, a “shooting star” is a piece of space rock or dust that briefly becomes visible when it begins to burn up in our planet’s atmosphere. Much of this material comes from the asteroid belt between Mars and Jupiter.

Related: Why are asteroids and comets such weird shapes?

So, how common are shooting stars? How often do these flashy space rocks come into contact with Earth’s atmosphere, and what’s the best way to see them?

“Meteors occur all of the time, all over the Earth, but are only seen at night,” Krupp said. Most extraterrestrial rubble that collides with the atmosphere is “very small, typically the size of a grain of sand,” he added.

The number of meteors visible to the unaided eye under a truly dark sky in a 24-hour period all over Earth is estimated to be 25 million, according to a University of Oregon report. However, Earth also intercepts many smaller particles that are too faint to be detected by the unaided eye, Krupp noted.

Since 2001, the International Dark Sky Places conservation program, run by the International Dark-Sky Association (IDSA), has encouraged communities to “preserve dark sites through responsible lighting policies and public education.” The IDSA also dictates whether a site can officially be called a “dark sky,” and has, to date, awarded 195 areas around the world dark sky status.

Certain sites have “gold-tier dark sky” status, which is the IDSA’s highest possible rating. Some of the best dark sky areas include Northumberland National Park in England, the largest gold-tier dark sky park in Europe; the Central Idaho Dark Sky Reserve, the first gold-tier dark sky preserve in the United States; and the Atacama Desert in Chile, which contains La Silla Observatory, home to some of the world’s most powerful telescopes. (You can see a comprehensive list of the world’s best dark sky sites at this page from the International Dark-Sky Association.)

Unfortunately, and largely due to human activity, pristinely dark skies are increasingly hard to find. According to the “World Atlas of Artificial Night Sky Brightness,” around 80% of the world’s population lives under “skyglow,” which the U.S. Department of Energy defines as “an increase in the apparent brightness of the night sky that can serve to reduce visibility for astronomical observation.” In the U.S. and Europe, it’s estimated that 99% of people live under some degree of skyglow.

Starlink, Elon Musk’s internet-enabling satellite network, is also causing issues for astronomers. Once fully operational, there could be 42,000 Starlink satellites orbiting Earth, something that has led the International Astronomical Union to create the Centre for the Protection of the Dark and Quiet Sky from Satellite Constellation Interference to “mitigate the negative impact of satellite constellations.”

Related: How did the Milky Way get its name?

For most people, Krupp said, seeing a shooting star is a rare event because “we have lost the night sky to light pollution,” which “unnecessarily denies us the stars.” Krupp also believes that many of us are guilty of being “busied by other things” and, as a result, often don’t take the time to look at and admire the sky. But he is confident that a person who deliberately and purposefully watches the sky on a clear night from a location “untarnished by artificial light” will be able to see “five to 10 meteors per hour,” if not more.

“All you’ve got to do is go outside, find a nice dark spot, lie flat on your back and look up,” Bill Cooke, head of NASA’s Meteoroid Environment Office at the Marshall Space Flight Center in Alabama, previously told Live Science. “You don’t want binoculars. You don’t want a telescope. You just use your eyes.”

There are also times throughout the year when people are more likely to see shooting stars. Meteor showers, which occur when Earth annually passes through the “persistent ring of debris shed by a comet,” give stargazers a much better chance of seeing a host of shooting stars. These events can be predicted to the day, thanks to the reliability of Earth’s orbit around the sun. For instance, the Perseid meteor shower, which often peaks in August, can shower Earth with as many as 50 to 100 visible meteors per hour.

Shooting stars are, it would appear, far more common than most people think — you just have to look up at the right time and be in the right place.