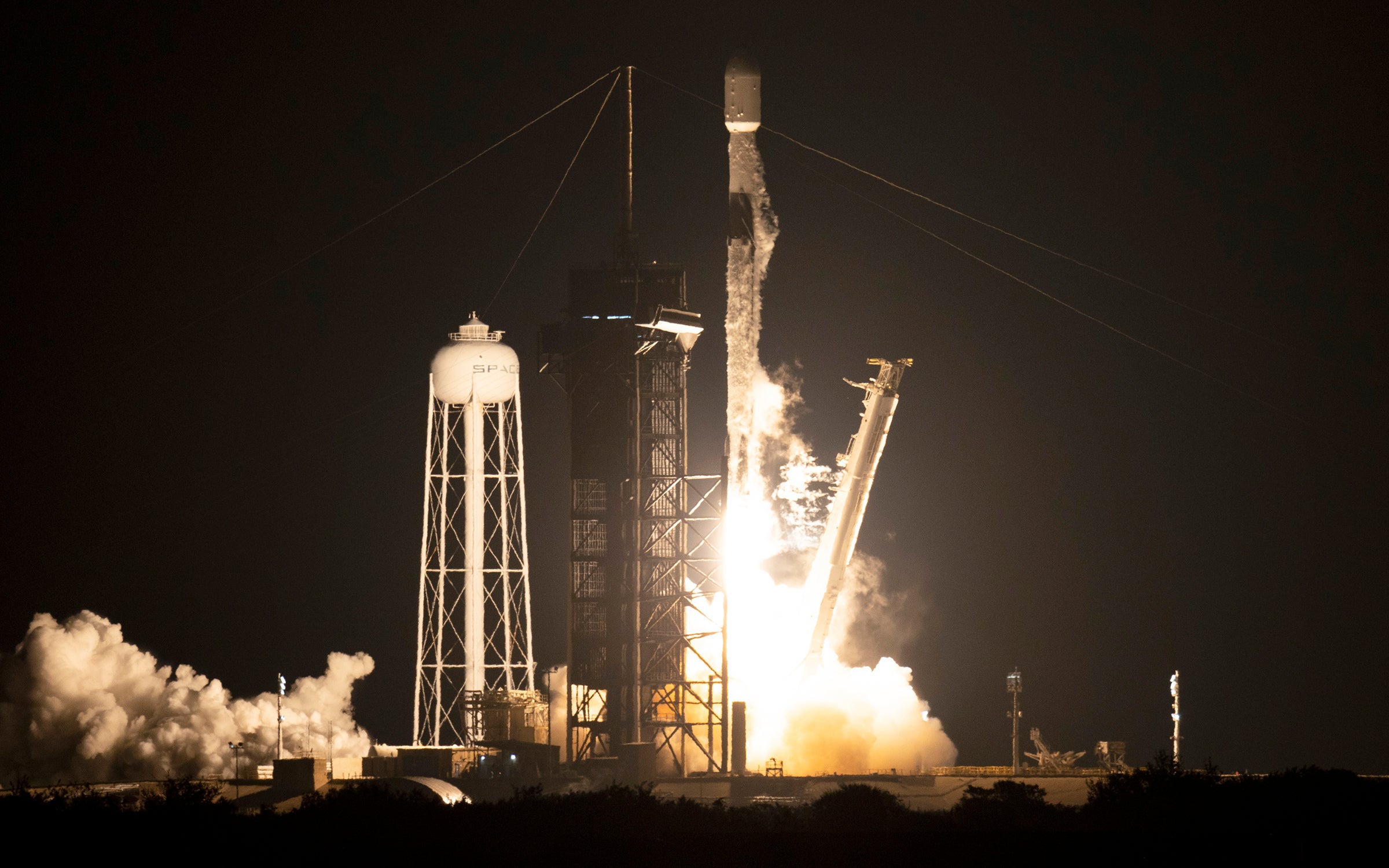 A used Falcon 9 rocket blasted off at 1 a.m. (0600 GMT) from Pad 39A here at NASA’s Kennedy Space Center in Florida, carrying the Imaging X-ray Polarimetry Explorer (IXPE). The mission marked the fifth flight for this particular booster.

“Liftoff of Falcon 9 and IXPE, a new set of X-ray eyes to view the mysteries of our skies,” NASA TV’s launch commentator Derrol Nail said during a live webcast of the launch.

The IXPE satellite, which is roughly the size of a refrigerator, is a $214 million dollar mission that aims to probe the physics behind some of the universe’s most dynamic objects: black holes and neutron stars. Astronomers are hoping that this satellite will be a new tool at their disposal to probe the mysteries of the universe.

Equipped with three identical telescopes, IXPE will study the polarization of light (meaning how a light wave oscillates relative to the direction of the wave) from some of the universe’s most dramatic cosmic sources. Astronomers will be able to refine the structure and study the mechanisms that power these types of enigmatic cosmic objects.

“What polarization tells us depends on the source,” Martin Weisskopf, IXPE principal investigator told Space.com during a prelaunch news conference on Dec. 7. “Black holes, for instance, don’t have a lot of properties but you can measure the spin by looking at the variation in the polarimetry of X-rays emanating from these sources.”

IXPE will join the ranks of NASA’s other X-ray observing satellites, like the Chandra Space Telescope, which orbits much higher than IXPE will. Chandra is an imaging satellite that takes pretty pictures of X-ray sources, while IXPE will focus solely on the polarimetry of light.

It’s first target will be Crab nebula, which is the remnant of a dead star. IXPE is designed to look at very dramatic targets, and the remnants of a stellar explosion is the perfect subject to start with. Weisskopf explained in a prelaunch news conference on Dec. 7 that inside the Crab Nebula is a lighthouse-like pulsing beacon, which is actually the corpse of the star that created the nebula.

The polarimetry of the light emanating from the pulsar has been measured before but not in this detail.

Thursday’s flight also marks the second rocket launch from Cape Canaveral this week. Early Tuesday morning (Dec. 7), an Atlas V rocket blasted off from an adjacent launch pad, carrying a mix of payloads into space for the U.S. government.

This veteran launcher, called B1061, has carried eight astronauts into space as part of NASA’s first two long-duration missions (Crew-1 and Crew-2), a total of three different Dragon spacecraft, including a cargo mission in August, and a broadband satellite for Sirius XM.

Thursday’s pre-dawn flight marks the 131st overall flight of a Falcon 9 and the 28th Falcon 9 to fly in 2021. This beats SpaceX’s record for the most rockets launched in a single year—the company launched 26 in 2020—with two more launches on the schedule before the end of this year.

Following a successful liftoff, the rocket’s first stage landed on one of the company’s three massive drone ships, which serve as floating landing pads. Named “Just Read the Instructions,” the drone ship was waiting out in the Atlantic Ocean to catch the booster and haul it back to port to fly again.

The IXPE satellite is the smallest dedicated payload to fly on a SpaceX Falcon 9 rocket. Originally slated to fly on a Pegasus rocket, the refrigerator-sized satellite switched launch vehicles, allowing NASA to shave a couple million dollars off the price tag.

The mission is the 98th launch arranged by NASA’s Launch Services Program (LSP), since its inception in 1998, and the fifth LSP launch for SpaceX. It’s also the first LSP launch to blast off from NASA’s historic Pad 39A.

“We are thrilled to play a very small part in this incredible science mission,” Tim Dunn, director of NASA’s LSP, which matches payloads with rocket launchers, told Space.com. “It’s our fifth mission to ride on a Falcon 9 and the first to launch from NASA property.”

Dunn told Space.com that typically LSP lets the launch provider pick the launch pad a mission launches from if the company has multiple options, but in this case Pad 39A was the perfect match. That’s because it has an ideal water suppression system that will help mitigate the launch effects from the rocket, helping to keep the IXPE satellite safe on its way to orbit.

Dunn, along with Juliana Scheiman, SpaceX’s director of civil satellite missions, said that IXPE’s intended orbit is really putting the Falcon 9 through its paces. That’s because IXPE has to fly over the equator, in a lower orbit, to shield itself from excess radiation exposure that it would receive in higher orbits and to be closer to the ground stations it will be communicating with. To that end, it has to conduct a “dog-leg” maneuver, meaning it has to change orbital planes after launch, going from a 28.5-degree inclination to a 0.2-degree equatorial orbit.

The landing marked the fifth successful touchdown for this particular booster and the 97th overall landing of a Falcon 9 rocket since 2015. In addition to recovering the rocket’s first stage, SpaceX will also retrieve the payload fairings (aka the rocket’s nose cone) which protect the payload as the rocket soars through the atmosphere.

One of SpaceX’s recovery ships will pluck the fairings from the ocean so they can be returned to port, refurbished, and flown again.

Up next for SpaceX is the launch of a communications satellite for Turkey as well as a cargo resupply mission for NASA. Those launches are slated to blast off on Dec. 18 and Dec. 21, respectively, to cap off a busy month here on the space coast.