Paleontologists in Argentina have identified a new species of dinosaur which likely had such feeble forearms, it would make Tyrannosaurus rex look like Popeye in comparison.

The dinosaur, named Guemesia ochoai and identified from a single skull, is thought to belong to a clade of tiny-armed carnivores known as abelisaurids, which once tramped across Europe, Africa, South America, and India before they went extinct about 66 million years ago.

The skull of G. ochoai is the only one of its kind to be found in northwest Argentina and it’s about 70 million years old. Unlike other abelisaurids, its braincase is ‘remarkably small’.

In fact, it’s one of the smallest-brained abelisaurids recorded to date – 70 percent the size of the famous Carnotaurus genus, which lived at the southern tip of South America and was recently featured in Jurassic World.

If the newly discovered species’ arms were anything like those of its Patagonian counterparts, they would have flopped uselessly onto its broad chest. Without ossified wrist bones or mobile elbow joints, abelisaurids could not bend their upper appendages, let alone grasp something between their fingers. They didn’t even have claws.

But don’t let that fool you. Even though the Northern Hemisphere’s T. rex had longer and more muscular arms, abelisaurids could still take down prey much larger than themselves. Their strong jaws and blade-like teeth easily made up for their puny forelimbs.

With just a skull, it’s hard to say much about how G. ochoai measured up to other abelisaurids, but a press release from the United Kingdom’s Natural History Museum compares it to Carnotaurus sastrei, shown below, but with a smaller head and no horns. 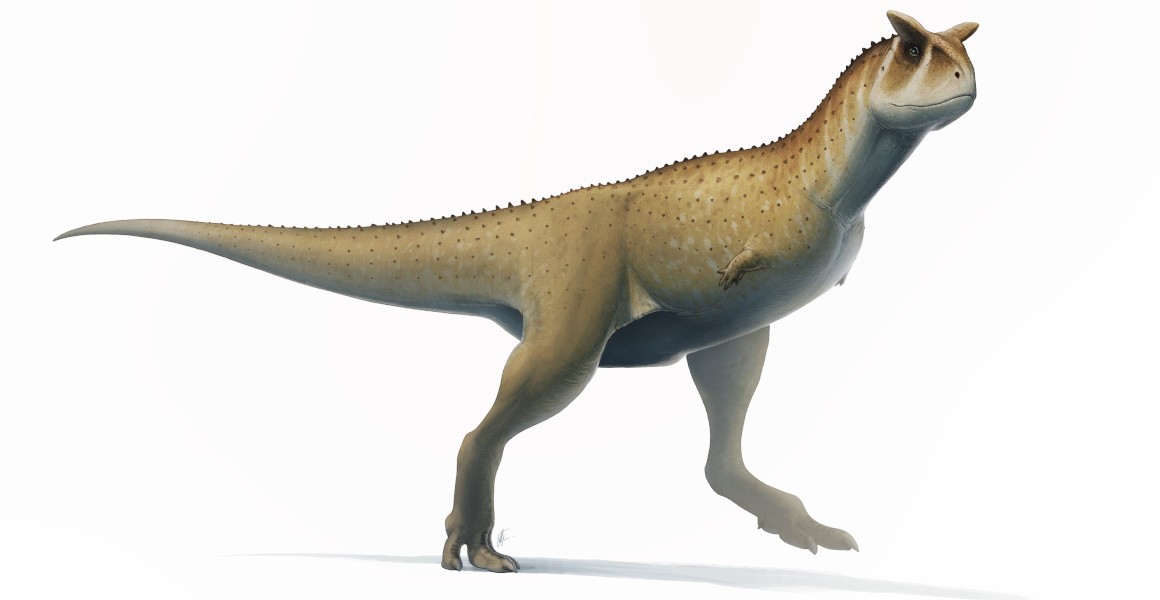 “This new dinosaur is quite unusual for its kind,” says paleontologist Anjali Goswami from NHM in the United Kingdom.

“It shows that the dinosaurs that live in this region were quite different from those in other parts of Argentina, supporting the idea of distinct provinces in the Cretaceous of South America.”

The analysis supports other recent discoveries, which suggest abelisaurids were more diverse in South America than experts thought. As the southern supercontinent, Gondwana, began to split up, it seems abelisaurids were able to adapt to different isolated ecosystems.

Why they evolved such tiny arms is still unclear. Experts suspect these are vestigial limbs, useless leftovers from ancestors who once benefited from their presence.

Nearly all the abelisaurid fossils found in Argentina so far have been from Patagonia and they share many physical similarities, including comically small arms. But G. ochoai is the first to be found in the northwest, and its features are quite different, possibly reflecting life in a warmer climate.

Its skull, for instance, shows a series of small holes that might have allowed the dinosaur to cool itself down by pumping blood to the skin’s surface and releasing heat. Such a feature wouldn’t be as useful further south.

“During the Late Cretaceous, South America was divided into northeastern and southwestern realms by a sea corridor which acted as a filter for some vertebrates,” the authors write.

“The strong morphological differences exhibited by Guemesia in contrast to other abelisaurids, may be an additional proof of the biogeographic distinctiveness of northwestern Argentina during the late Cretaceous.”

Compared to other fossil rich parts of the world, Argentina is relatively unexplored, which means this probably isn’t the last abelisaurid species we’re going to find.

The study was published in the Journal of Vertebrate Paleontology.