There was a time, not so long ago, when computers were so large, they occupied entire rooms. Today, some processing units can come as small as a few specks of dust.

Even next to a grain of rice, these stacks of micrometer-sized chips look infinitesimal.

Shrinking computer batteries to fit that size, however, has proved more challenging.

With little room for storage, the tiniest computers must rely on ultrasound or photovoltaic cells to continuously top up microbatteries with energy from vibrations or sunlight. That has its downsides, as the computer won’t work without a constant power supply or in dark places like the human body.

Some scientists in Europe are therefore proposing an alternative structure: a microbattery based on folding micro thin layers like origami.

The battery is just a prototype for now, but the preliminary results are encouraging. 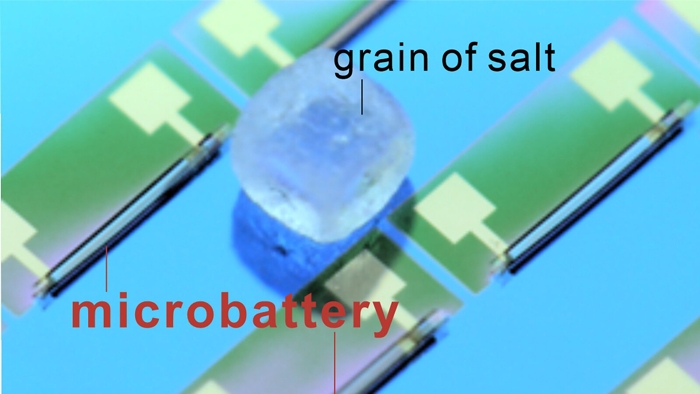 “There is a desperate need to develop high-performance batteries for the millimeter and sub-millimeter size regime because such energy storage systems would facilitate the development of genuinely autonomous microsystems,” the authors write.

Full-sized computer batteries are usually based on ‘wet chemistry’, which means metal foils that conduct electricity are placed in contact with liquid electrolytes to create a flow of energy.

As such, the inventors of this new microbattery have squeezed a solid electrolyte between two microchips that are painted with a super thin film of electrodes, one positive, one negative.

By winding up a flat battery stack into a ‘Swiss-roll cylinder‘, scientists can squeeze a lot more surface area into a tight space. This is actually how the cylinder cells in Tesla’s electric cars work.

At the scale of a cubic millimeter, it’s extremely difficult to roll thin and brittle materials into this sort of shape via external pressure.

Luckily, there’s another way to get the material to fold up on its own, and it’s called ‘micro-origami’.

The technique kind of works like a rolling window blind. As the thin material is tugged down, you can let that mechanical tension go and the whole thing will shoot up and roll into a cylinder.

On a chip, researchers were able to achieve this movement by pinning down one side of the thin material to create, in essence, the bar of a window blind.

Ultimately, the team was able to roll up a prototype microbattery into an area just 0.04 millimeters squared, delivering a capacity eight times higher than a similarly sized flat battery would achieve.

The authors say the cylinder resembles the standard Swiss-roll structure used in larger batteries, including at least two collector layers, a cathode film, an anode film and an electrolyte film all rolled up together.

Not only is the design rechargeable, researchers say the battery as it stands could power the smallest computers we have for about 10 hours. And there’s still more work to be done.

“There is still a huge optimization potential for this technology, and we can expect much stronger microbatteries in the future,” says physicist Oliver Schmidt from the Chemnitz University of Technology in Germany.

The study was published in Advanced Energy Materials.