Wherever there is sand and an atmosphere, prevailing winds may whip the grains into undulating shapes, pleasing to the eye with their calming repetition.

Certain sand waves, with wavelengths between 30 centimeters (almost 12 inches) and several meters (around 30 feet), are known as megaripples: they’re between ordinary beach ripples and full dunes in size, and we’ve seen them not just on Earth, but even on other planets such as Mars, well known for its all-encompassing dust storms.

Aside from their size, a key characteristic of these middle-ground ripples is the grain size involved – a surface of coarse grains over an interior of much finer material. Yet this mix of grains is never the same, and nor are the winds that blow across the sand to create the ripples in the first place.

Now researchers have discovered a surprising mathematical feature of megaripples: Dividing the diameter of the coarsest grains in the mix with the diameter of the smallest grains always equals a similar number – something that hasn’t been spotted before across several decades of research. 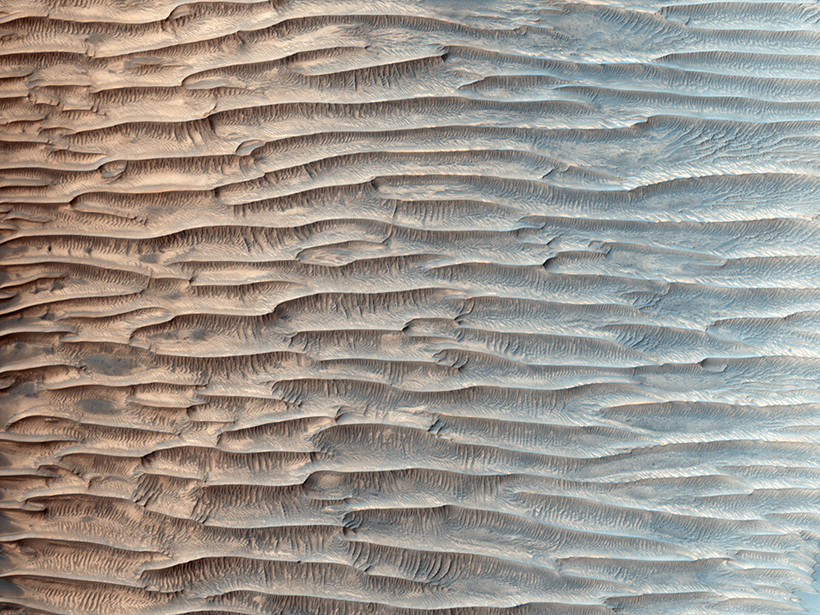 Transverse aeolian ridges, a type of megaripple seen on Mars. (NASA/JPL-Caltech/Univ. of Arizona)

In the future, this number could be used to categorize different types of ripples and which particular grain transport processes formed them, the study authors conclude.

“We found that a characteristic signature of grain-scale transport is encoded in the grain-size distributions (GSDs) that co-evolve with megaripples,” write the researchers in their published paper.

“Our compilation of original and literature data firmly establishes the accuracy and robustness of the theoretical prediction across a wide range of geographic locations and prevailing environmental conditions.”

As winds whip across the sand, megaripples are caused by fine grains kicking up coarser ones. Traveling at different rates, the coarse grains collect on the crests of the ripples, while the fine grains usually settle in the troughs.

Samples were studied from megaripple fields in Israel, China, Namibia, India, Israel, Jordan, Antarctica and New Mexico in the US. Further analysis was added from observations made on Mars and in a lab wind tunnel.

“A comprehensive collection of terrestrial and extraterrestrial data, covering a wide range of geographical sources and environmental conditions, supports the accuracy and robustness of this unexpected theoretical finding,” write the researchers.

What also sets megaripples apart is that they’re more fragile than smaller sand ripples and larger dunes, and more susceptible to the whims of shifting wind patterns – if the wind gets too strong, the mechanisms creating the megaripples get overpowered.

The researchers suggest that their calculations could also be used to predict when this will happen, and even to look back at past weather and climate conditions based on the sediment left behind by previous megaripples.

The findings even apply beyond Earth: they could give us a better understanding of how megaripples are created on planets such as Mars, and the sort of atmospheric conditions required to produce them rather than other types of sand waves.

“If we were able to use prevailing atmospheric conditions to explain the origin and migration of terrestrial and extraterrestrial sand waves, this would be an important step,” says theoretical physicist Katharina Tholen, from Leipzig University.

“It might then be possible to evaluate the sand structures we are currently observing, for example on Mars or in fossils and remote locations on Earth, as complex archives of past climatic conditions.”

The research has been published in Nature Communications.