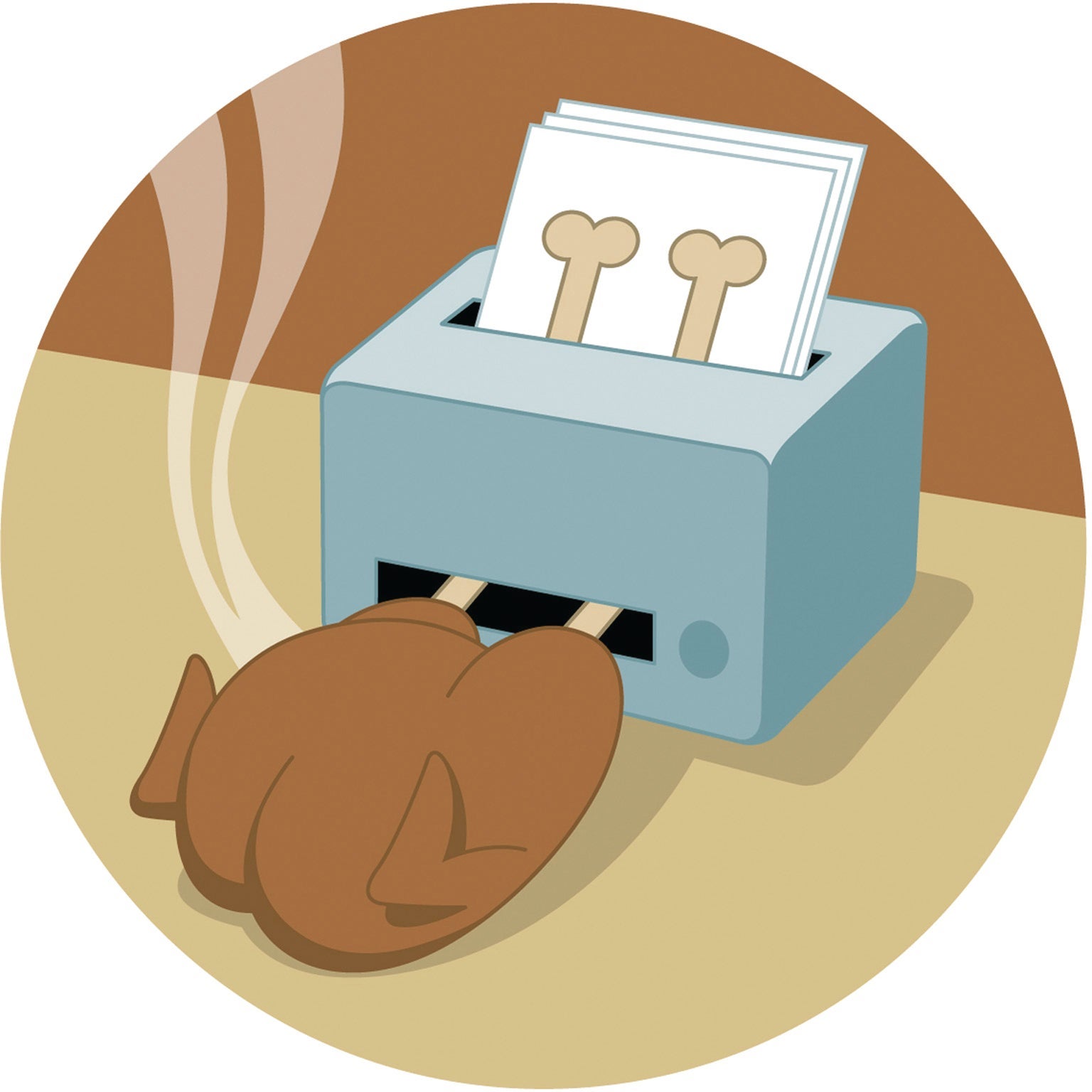 Tomorrow’s gourmet menus could feature items prepared with complex cooking techniques and intricate presentation—all at the push of a button. Columbia University mechanical engineers have designed a 3-D printer that can simultaneously produce and cook dishes with details at the millimeter scale.

The proof-of-concept design, described in npj Science of Food, combines a multiwavelength laser cooker, roughly the size of five smartphones stacked together, with a microwave-oven-sized food printer. As the device’s robotic arm deposits fine layers of chicken puree, a high-powered beam zigzags over them and cooks the meat—with literally laser-focused precision. “It’s almost like having a crème brûlée torch,” says Jonathan Blutinger, lead author of the paper and a digital-cooking researcher at Columbia. “It gives you a lot more control and customization.” The researchers tested only chicken for this study, but the system can work with other foods as well.

The system, which the researchers say is the first to combine a laser cooker with a 3-D food printer, uses various light wavelengths to cook in different ways: a short-waved blue laser penetrates deep inside meat, for example, while infrared beams (which have longer wavelengths) broil or brown the surface. Thus, users can achieve elaborate results—say, a machine-made burger that alternates between rare and well done in a checkerboard pattern.

The new technology is “astounding,” says Megan Ross, a food scientist who studies 3-D printing at Ireland’s University College Cork and was not involved in the study. Ross notes that the design is still at a nascent stage and that many technical challenges remain, such as preventing cross contamination between layers of raw and cooked meat.

Still, Ross is impressed by the device’s ability to produce foods outside the realm of conventional cooking. “Is this going to be sold in shops everywhere in the next few years? No,” she says. “But everyone has to start somewhere.”

Compared with 3-D-printed chicken cooked in a traditional oven, the laser-cooked version retained nearly twice as much weight and volume, the researchers found. “That chicken is going to be juicy,” says Liam MacLeod, a Denver-based chef and former 3-D food printing specialist at the Culinary Institute of America, who was not involved in the study. MacLeod does not think such technology will ever replace chefs, but it might “add a tool to their arsenal” to deliver a new sensory experience. “Cooking is a skill set that has been practiced and perfected for thousands of years,” he says. “It’s very exciting to come up with something new and unique that people haven’t experienced yet.”