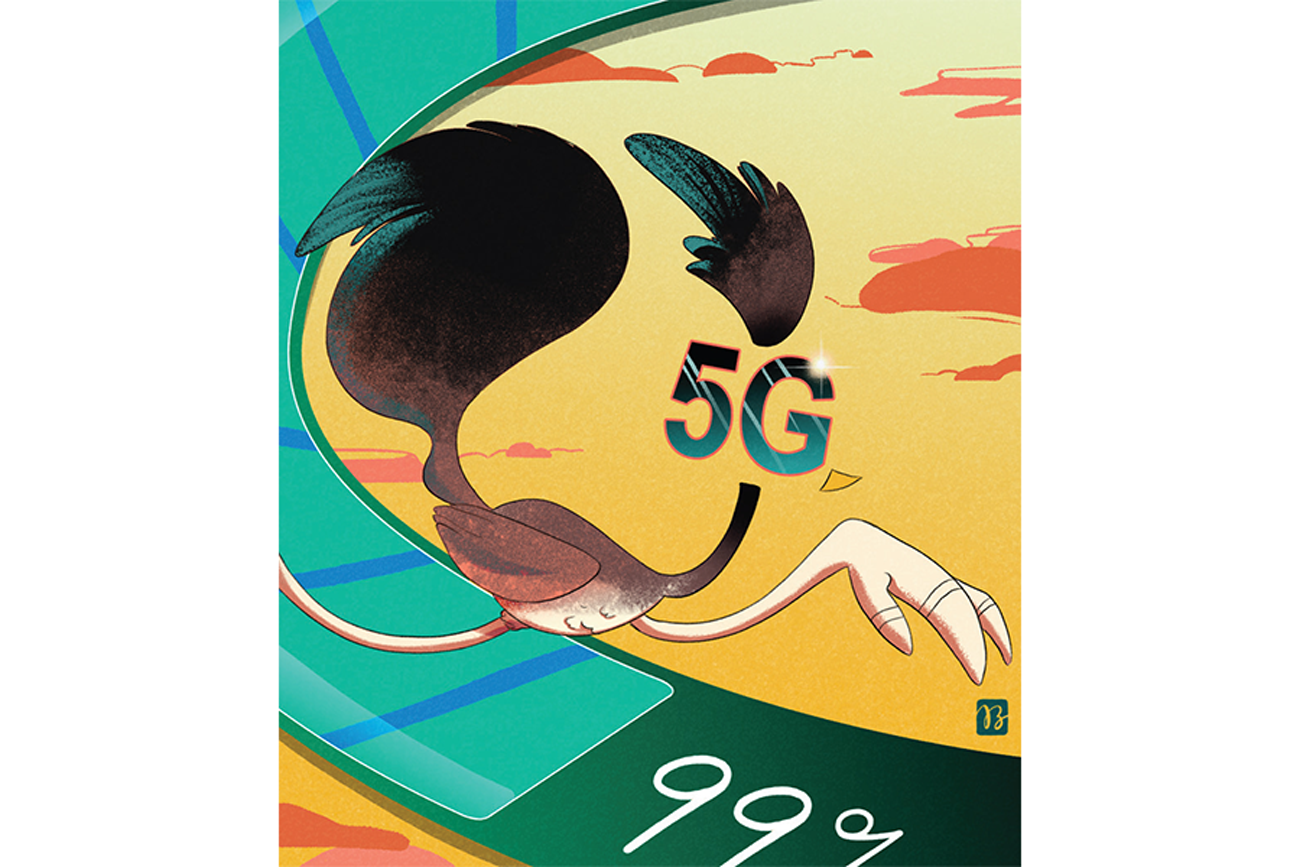 Editor’s Note (1/18/22): AT&T and Verizon will delay the debut of 5G cellular service near some airports. The decision follows concerns from U.S. airlines that the rollout, set to start on Wednesday, would interfere with aircraft equipment. This story is being republished to provide information on what to expect from the fifth-generation wireless technology.

You’re probably used to the periodic upgrades in our cell-phone networks. There was 2G, which came along in 1991, replaced with 3G in 2001, followed by 4G in 2009. Now we’re hearing about the coming of 5G.

But 5G is a much bigger leap than what’s come before. Qualcomm’s Web site, in fact, calls it “as transformative as the automobile and electricity.” (One of the world’s leading makers of phone-networking chips, Qualcomm was a key player in the development of the 5G standard—and stands to profit handsomely from its success.)

Of course, 5G is much faster than 4G—in the real world, a 5G phone in a 5G city will enjoy Internet speeds between nine and 20 times as fast. The latency of 5G (the delay before those fast data begin pouring in) is one tenth as long.

The arrival of 5G also means enormous leaps forward in capacity—so much that every cell-phone plan will offer cheap, truly unlimited Internet access. “The consequences of that are immense,” says Sherif Hanna, Qualcomm’s director of 5G marketing.

For example, apps will no longer degrade your video or postpone downloading when you’re out of Wi-Fi range. In fact, you’ll probably prefer to do your downloads when you’re on cellular because 5G will be much faster than whatever service you’ve got at home or work. Furthermore, our phones can become radically more powerful. Today the processors in our devices are limited by heat and battery capacity. But imagine, Hanna says, if your phone is tied, by a 5G connection, to a much beefier computer online. “It’s happening remotely, but because it’s such a high-speed connection, it will feel as though the additional processor is inside your device, in your hand,” he says.

Another big change: 5G is not just for phones. It reflects the new world of Internet-connected gadgets, industrial machines, farming equipment and even cars. For example, the 5G protocol allows some transmissions to cut in front of others. In, say, 2023 when two self-driving cars need to communicate to avoid a collision, their data will get priority over your stream of Star Wars: Episode XXV.

Not everyone is thrilled by the 5G development. The new standard gets its speed partly by using existing transmission frequencies more efficiently and partly by harnessing the millimeter-wave spectrum. That’s a big, juicy swath of radio frequencies that are currently underused—because millimeter wave is “really hard to use—very finicky, very tricky,” Hanna says.

These frequencies are much higher than anything we’ve used for cellular. (Your Wi-Fi network uses the 2.4- or 5.8-gigahertz bands. Millimeter wave is 24 gigahertz and up.) Which means they can offer unbelievable speed—but at the expense of range. Millimeter-wave cellular towers have to be about 500 feet apart. Cell carriers not only will have to upgrade all their cell transceivers (called small cells) but will install a lot more of them as well.

That’s why the millimeter-wave flavor of 5G—the superfast coverage—will be available only in densely populated cities such as New York and San Francisco. In suburban and rural areas, 5G will bring a speedup of “only” nine times faster.

But 5G is a train that can’t be stopped. The big cell carriers will be turning on 5G in a handful of cities by the end of 2018, and the first 5G-enabled smartphones are expected to go on sale in early 2019. “I don’t think most people realize [that] initially 5G was targeted for 2020, and now we’re talking about late 2018,” Hanna says. “We’re working around the clock. Weekends, nights—it’s really pretty brutal right now, to be honest.”

Here’s to all those engineers and their millimeter waves. Someday we’ll tell our grandkids about the days when YouTube videos paused annoyingly, people paid for data by the gigabyte and the only way cars could communicate was by honking.