A man in his 50s presented to doctors in India a black, hairy tongue after suffering a stroke, according to a report by JAMA Dermatology.

The man had left-sided weakness from a stroke three months prior and was put on a pureed diet, doctors said in the report published Wednesday. A thick, black coating had covered most of his tongue for about two weeks, sparing the sides and middle part, they said.

The doctors diagnosed the condition as black hairy tongue, or lingua villosa nigra, a harmless condition, according to the American Academy of Oral Medicine. Hairy tongue occurs in about 13 percent of the population, the academy says.

The Indian dermatologists said black hairy tongue was more likely to occur in people on a pureed diet, and it forms because of a lack of abrasion or stimulation to the top of the tongue, which leads to a buildup of a protein called keratin.

As a result, conical projections covering the tongue, called filiform papillae, get long and form a hairlike appearance on the top of the tongue. 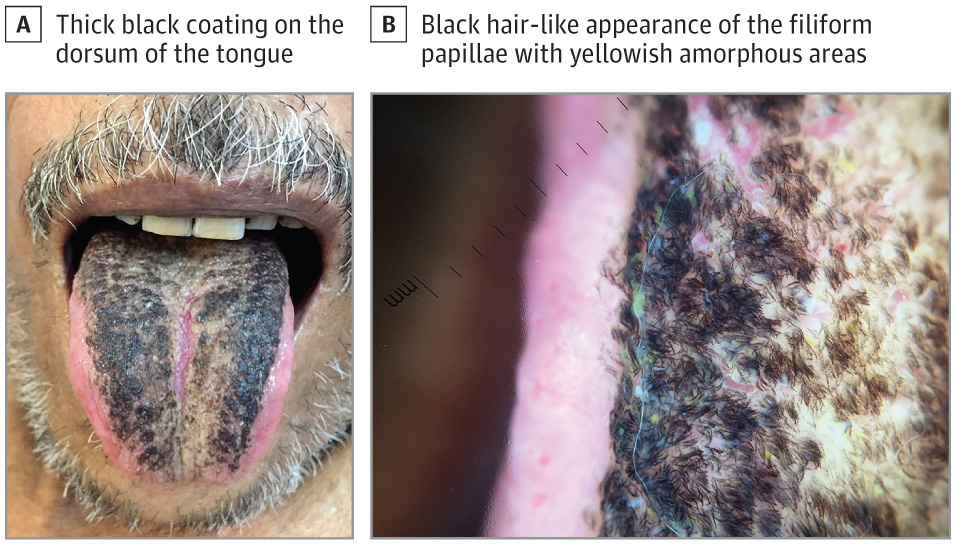 Other predisposing factors include: poor oral hygiene, smoking, oxidizing mouthwashes, oral antibiotics, excessive coffee or tea drinking, and conditions that suppress the immune system, such as HIV or cancer.

It can occur at any age but happens more frequently in older people, according to the National Institutes of Health.

Usually, black hairy tongue gets better by brushing the tongue with a toothbrush or using a tongue scraper.

For this patient, the condition resolved after 20 days with “proper cleansing,” the doctors said.