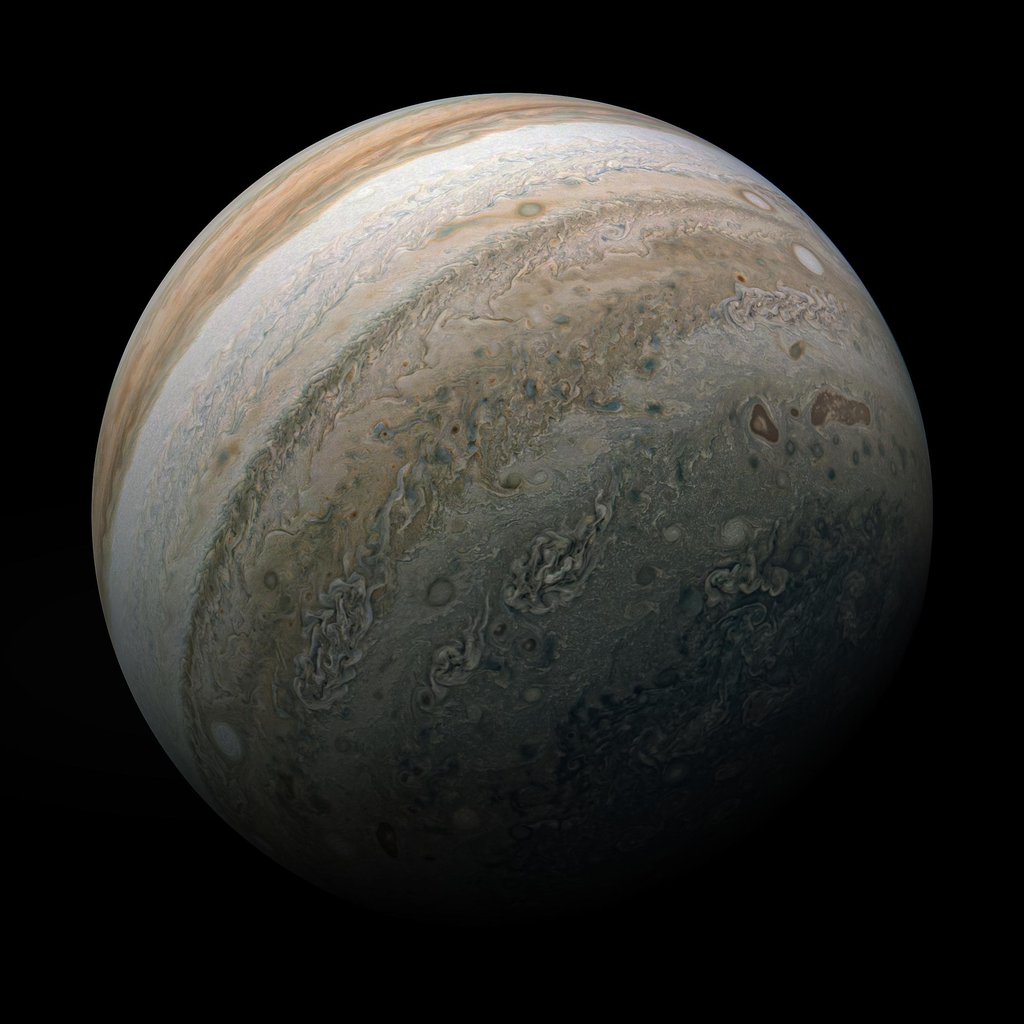 Jupiter’s atmosphere has a strange composition, but it could be explained if the planet formed farther away from the sun than where it orbits today, a new study suggests.

Scientists have known since NASA’s Galileo mission in the 1990s that the atmosphere of the largest planet of the solar system contains heavier chemical elements, elements with more protons in their cores, than the sun. That means the atmosphere of Jupiter also has a higher ratio of heavier elements than the material from which the planet formed some 4.5 billion years ago. For every atom of hydrogen, there are more atoms of oxygen or carbon in Jupiter’s atmosphere than in the sun.

A new study suggests that this strange chemical composition could be explained if the gas giant formed four times farther away from the sun than where it currently orbits. Such an origin wouldn’t be that surprising, as scientists know that planets frequently migrate during their formation. That movement is usually triggered by gravitational interplay between the disk of material a star’s planets arise from and the star itself.

Using computer modeling of planetary formation, the new study found that a Jupiter formed so far from the sun would reach just the right size to attract a lot of what scientists call planetesimals. These planetary embryos form in the same debris disks as planets but later in a system’s formation.

(To wrap their brains around solar system distances, scientists dub the average distance from the Earth to the sun one astronomical unit, or AU. One AU is about 93 million miles (150 million kilometers).

“If Jupiter migrated from, for example 20 astronomical units to where it is today at five astronomical units, it could have accreted enough material during the last phases of its formation,” Ravit Helled, a planetary scientist at the University of Zürich in Switzerland and co-author of the study, told Space.com. “You don’t actually have to accrete too much material, you just need to accrete it late enough.”

The late accretion is important. If the planetesimals hit the nascent Jupiter too early, the heavier elements they contained would have accumulated closer to the planet’s interior, where they would have been invisible to the Galileo mission.

Even more strange is that the current NASA mission to Jupiter, Juno, has delivered measurements of the planet’s gravity field, the variations in the gravitational forces exerted by the planet, that don’t seem to match Galileo’s observations either

Helled added that those heavy elements would only stay in the upper layers of the planet’s atmosphere following the planetesimal impacts because the entire planet is not mixed up properly.

“We know from Juno that Jupiter is not fully convective, the material is not fully mixed,” Helled said. “So our idea is that this outer region is not necessarily communicating with the deep interior.”

There is still a lot that scientists don’t understand about the evolution of the solar system’s largest planet, but insights into the formation of Jupiter will also help improve our understanding of the formation of giant planets around other stars, Helled added.

The study was accepted for publication in the Astrophysical Journal and was posted on the online repository arXiv.org on Feb. 15.