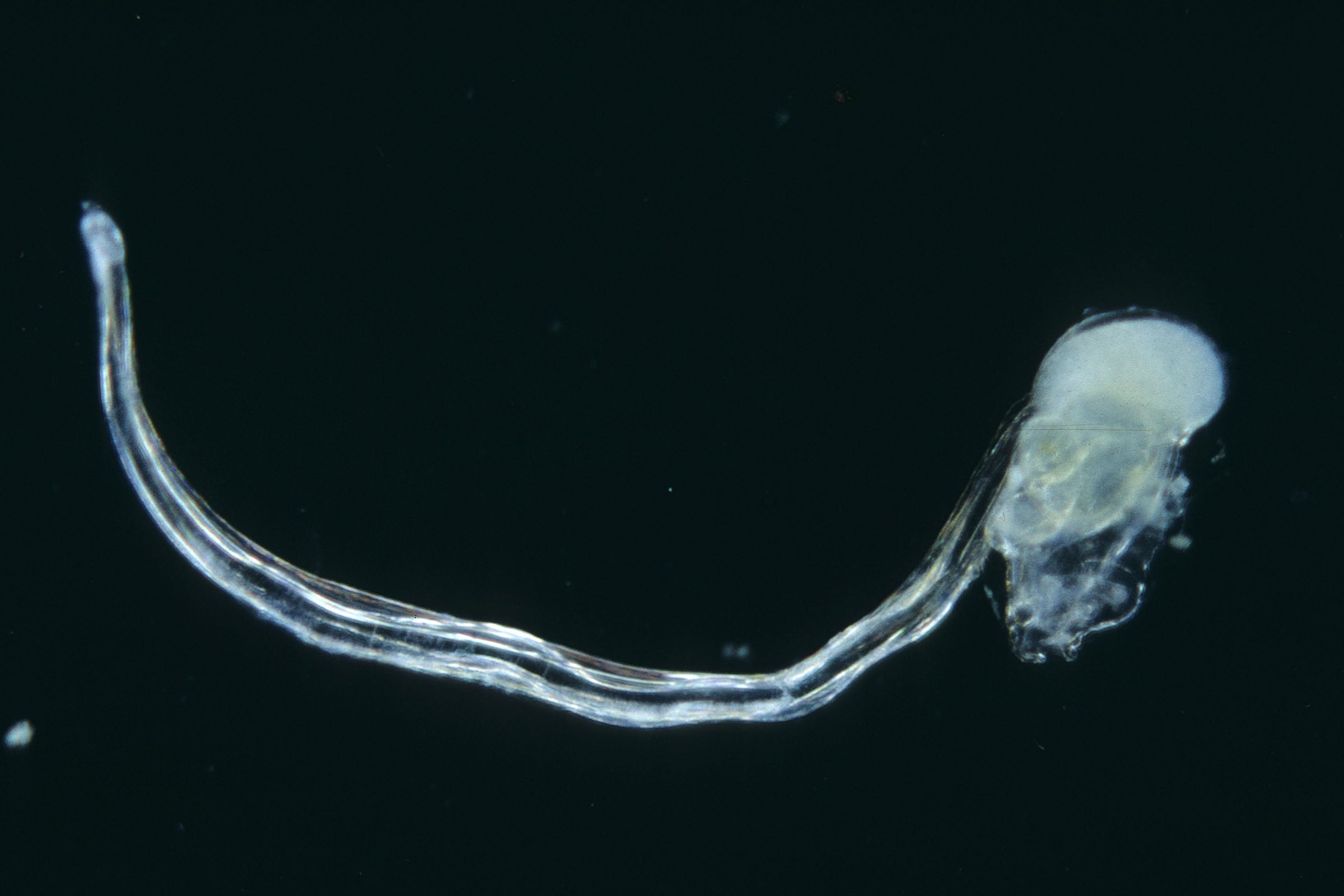 As far as sea squirts and their close relatives go, the genus Oikopleura represents a decidedly strange group of organisms, both from the standpoint of physical attributes and genetics. It belongs to a larger group of invertebrate animals that are closely related to all vertebrates: the tunicates. But unlike most others in that group, it does not undergo metamorphosis from a free-swimming larva to a fixed-to-the-bottom, or sessile, adult. Instead it lives its entire life as a tiny free-swimming creature, and it does so inside a balloon made up of a transparent sheet of cellulose, the main constituent of plants’ cell walls. The transparent balloon is its “house,” or “oikos” in Greek, and it envelops the entire body (about 0.5 millimeter in length) except for its long, extended tail, which beats continuously. Using its tail and heart to pump water through the semi-permeable balloon, Oikopleura filters small organic particles in the water and funnels any of this catch to its mouth.

The vast majority of adult tunicates sit on the bottom of the ocean and pump water into their mouth to filter feed; they do not come with a food-collection apparatus outside the body. But the free-swimming Oikopleura  evolved a different way to filter feed. It is so small that it has to make a big balloon or fishing net outside of its body to capture enough food to meet its metabolic demands. This structure enables the animal to thrive as a free-swimming filter feeder. “It is absolutely crazy,” says Billie Swalla, an evolutionary biologist at the University of Washington, commenting on Oikopleura’s large, external food-collecting apparatus. Swalla studies the evolution of chordates, the phylum that includes both vertebrates and tunicates.

In the case of Oikopleura, the creatures’ house quickly gets gummed up with particles from the seawater, at which point the animals sheds their messy oikos. “So they don’t clean the houses. They make a new one. That is happening every three hours,” says Cristian Cañestro, an evolutionary developmental biologist in Barcelona. The abandoned houses blanket the bottom of the world’s oceans like white snow.

Cañestro quickly learned that the balloons are not all that Oikopleura casts off. The researcher initially wanted to study the species Oikopleura dioica because, given its position on the evolutionary tree, it might reveal something about what the common ancestor of vertebrates looked like. But soon he discovered that this creature had lost a whole set of genes, including retinoic-acid-signaling genes that are essential for vertebrate heart and brain development. How then did this animal have a heart if it had lost the key genetic instructions for making one? In a study that appeared in Nature last November, Cañestro’s team, led by researcher Alfonso Ferrández-Roldán, reported how the creature had sped up its development to make a heart in a different way.

In vertebrate development, retinoic acid signaling specifies how an animal’s body is laid out front-to-back and determines which cells will make the heart, pharynx and brain. Cells that will form the heart are derived from stem cells, precursors to other cells that take on specialized functions, which confront several decision points during development that ultimately determine that they become heart cells instead of, say, jaw tissue. But in Oikopleura, the researchers discovered that the embryo’s cells have their fates sealed very early in development, bypassing the sequential cell fate decisions that occur in the vast majority of vertebrates.

Given its hurried determination of cell fate, Oikopleura dispenses with the need to use retinoic acid signaling to determine the heart because the cells already know their ultimate fate. So the creature can afford to lose that signaling pathway, explains Linda Holland, a marine biologist at the Scripps Institution of Oceanography, who was not involved in the recent Nature study.

Members of Oikopleura genus live fast and die young, going from egg to reproductive adult in about one week. “Because there’s been this selection for rapid development, they have taken a lot of shortcuts,” says John Postlethwait, an evolutionary biologist at the University of Oregon, who was also not involved in the November 2021 study but was Cañestro’s postdoctoral adviser more than a decade ago.

In fact, many tunicates decide cell fates extremely early in development. “This appears to have given tunicates a lot of flexibility to go evolving into outer space,” Holland says, referring to their unusual body forms and ecologies. “They have thrown away a lot of genes they didn’t need.”

Cañestro believes that Oikopleura losing those genes accelerated its heart development, which could be adaptive for the creature’s free-living lifestyle because it needs to immediately begin pumping water and acquiring food after hatching. “The animal needs a heartbeat right away when it makes the first house at 10 hours of age,” he says.

Oikopleura’s heart is simpler than that of sea squirts because it is not cylindrical. Rather it is made up of a flat sheet of cells that contract in concert with the continuously beating tail to pump water through the filter-feeding apparatus. The tail cannot easily push water through a cylindrical tube, but the laminar heart beats against the stomach in such a way that the heart and tail more easily coordinate the movements of water through the body cavity. In this way, losing genes that give rise to the more complex cylindrical heart provided the animal with a better solution to its free-swimming, filter-feeding life.

Cañestro’s team also used its analysis of gene losses in Oikopleura dioica to examine a long-standing controversy about what the ancestor of tunicates would have looked like. Based on the researchers’ analysis of the genomes of O. dioica and of other tunicates, they inferred that the ancestor still had the genes that vertebrates and other tunicates use to build a heart and pharyngeal muscle that are useful for a sessile filter-feeding existence as adults. It was therefore likely that the ancestral tunicate still underwent metamorphosis and had a sessile adult stage before the gene losses that resulted in a new type of heart, the researchers argued.

But that contention is by no means shared by all of Cañestro’s colleagues in the field. “The trouble is, it’s evolving especially fast and has an especially tiny genome,” Holland explains, referring to Oikopleura’s accumulation of a series of radical genetic changes, compared with even its closest relatives. Other tunicates, too, have undergone many radical gene losses and genome rearrangements. “Therefore, we can’t be sure what the ancestor of tunicates looked like,” Holland says.

Even if the ancestral tunicate remains a mystery, Oikopleura demonstrates that when genes go missing, their absence can sometimes lead to evolutionary innovations, such as this creature’s baroque but ultimately successful way of life.