Homo sapiens ventured into Neanderthal territory in Europe much earlier than previously thought, according to an archaeological study published in Science magazine on Wednesday.

Up to now, archaeological discoveries had indicated that Neanderthals disappeared from the European continent about 40,000 years ago, shortly after the arrival of their “cousin” H. sapiens, barely 5,000 years earlier, and there was no evidence of an encounter between these two groups.

The new discovery, by a team of archaeologists and palaeoanthropologists led by Ludovic Slimak of Toulouse University, pushes back the arrival of H. sapiens in Western Europe to around 54,000 years ago.

Another remarkable finding of the research is that the two types of humans alternated in inhabiting the Mandrin cave in what is now the Rhone region of southern France. 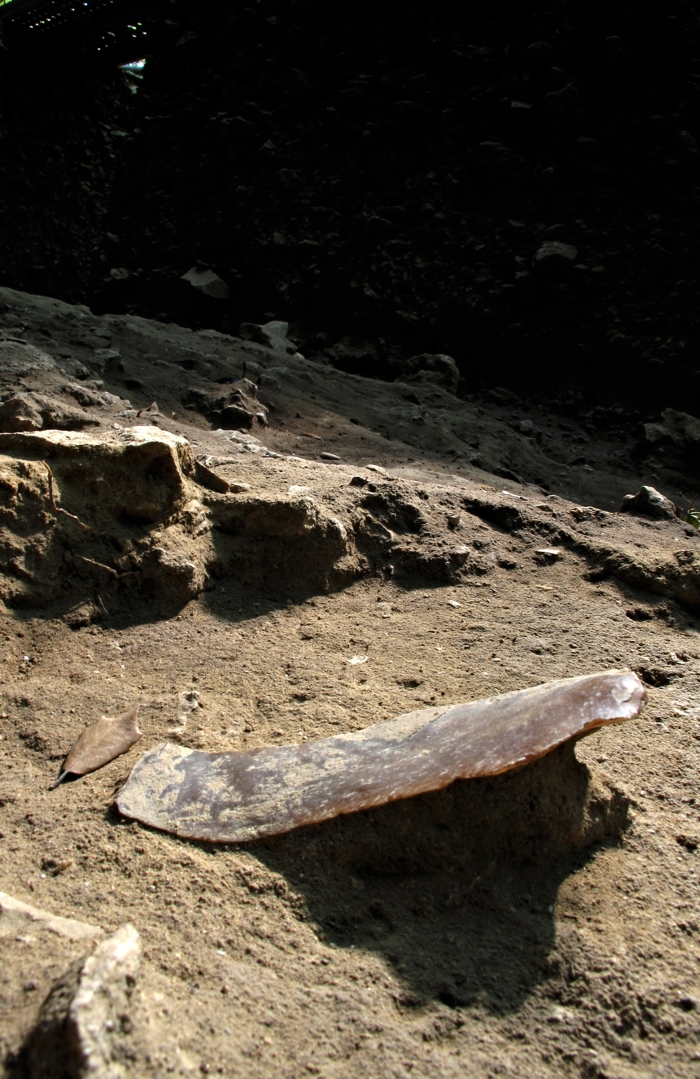 A long blade of the Neronian culture. (Ludovic Slimak)

The Mandrin site, first excavated in 1990, includes layer upon layer of archaeological remains dating back over 80,000 years.

“Mandrin is like a kind of neandertalian Pompeii, without catastrophic events, but with continuous filling of sands in the cave deposited progressively by a strong wind, the Mistral,” Slimak told AFP.

His team uncovered a layer, known as the “E layer”, containing at least 1,500 cut flint points, more finely executed than the points and blades in the layers above and below.

Very small in size, some of them less than a centimeter in length, these points “are standardized, to the nearest millimeter, something we haven’t seen at all with Neanderthals,” said Slimak, a specialist in Neanderthal societies.

These, he explained, were probably arrowheads, unknown in Europe at that time.

He attributes this production to a culture called Neronian, linked to several sites in the Rhone area.

In 2016, Slimak and his team visited the Peabody Museum in Harvard to compare their discoveries with a collection of carved fossils from the Ksar Akil site at the foot of Mount Lebanon, one of the major sites of the expansion of H. sapiens to the east of the Mediterranean.

The similarity between the techniques used convinced Slimak that the findings at the Mandrin site were the first traces of H. sapiens found in Europe.

A milk tooth found in the “E layer” confirmed his suspicions.

In all, researchers found nine teeth at the Mandrin cave site, belonging to six individuals.

These ancient teeth were entrusted to Clement Zanolli, a palaeoanthropologist at the University of Bordeaux.

The milk tooth from the “E” layer” was the only modern human tooth found at the site.

That “fossil molar from a modern human child provides the earliest known evidence of modern humans in western Europe”, the Natural History Museum in London said in a statement.

The archaeological team then used a pioneering technique, fuliginochronology, which analyses layers of soot impregnating the walls of a cave and the traces of ancient fires.

The reachers demonstrated that “this modern human population occupied this Rhone territory for some 40 years,” said Slimak.

At some point, the two populations either co-existed in the cave or on the same territory, the researcher concluded.

He imagines that Neanderthals could have served as guides to H. sapiens to lead him to the best sources of flint available, some of which were located up to 90 kilometers (55 miles away).

“Nothing new under the Sun… This is precisely what happened when Europeans began the colonization of the Americas or Australia,” he noted.

“The findings from Mandrin are really exciting and are another piece in the puzzle of how and when modern humans arrived in Europe,” concludes Professor Chris Stringer, co-author of the study and a specialist in human evolution at the Natural History Museum in London.

This overlap, which was evident in Mandrin, now places the Rhone region as a “major migration corridor (for H. sapiens) enabling them to reach the Mediterranean and continental European areas”, said Slimak, who promises more discoveries from the Mandrin site.