For the ancient Maya people who lived across central America for thousands of years, the cacao plant that chocolate comes from was considered to be a gift from the gods – so much so that beans from these trees were used as a unit of currency.

Now, researchers have been able to identify new locations where the Maya cultivated their sacred cacao groves, finding traces of the ancient crop in the soil of sheltered cenotes, which long ago would have provided the ideal mix of humidity and shade for the plants to flourish.

These cenotes exist on Mexico’s Yucatán Peninsula – not on the exposed surface, where conditions wouldn’t have been right, but inside sinkholes with their own microclimates. These sinkholes were found to contain theobromine and caffeine, key biomarkers for the growth of cacao plants. 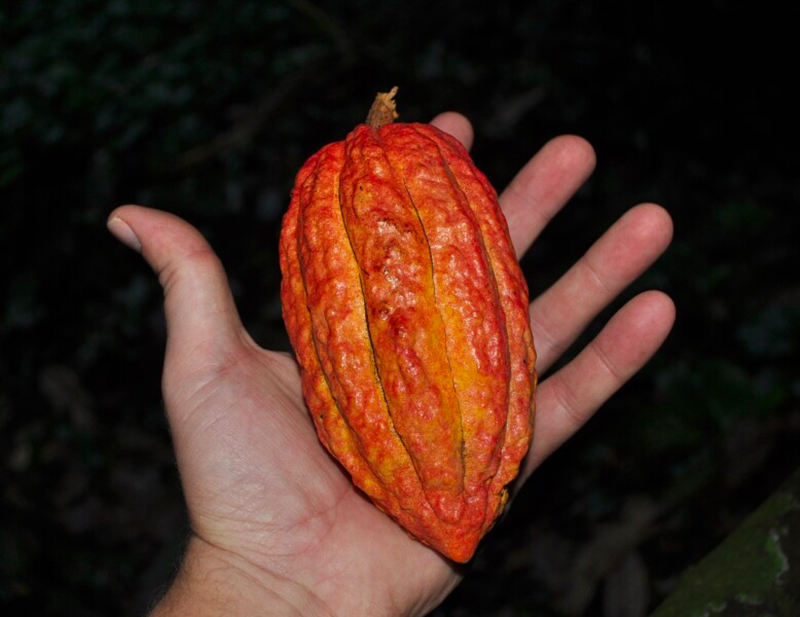 A cacao pod picked from one of the sinkholes. (Brigham Young University)

The team also discovered multiple signs of rituals being carried out in these hidden places: Stone staircases and carvings, altars, and jade and ceramics that would have been used as offerings to higher powers.

“We looked for theobromine for several years and found cacao in some places we didn’t expect,” says soil scientist Richard Terry from Brigham Young University (BYU).

“We were also amazed to see the ceremonial artifacts. My students rappelled into one of these sinkholes and said, ‘Wow! There is a structure in here!’ It was a staircase that filled one-third of the sinkhole with stone.”

Soil extracted from these sinkholes was dried and sieved before being covered with hot water and put in a centrifuge to separate individual elements. Mass spectrometry was then used to see what the soil contained. Finally, the results were confirmed through a comparison with control samples.

One of the sinkholes, near Coba in Mexico, is thought to have been the site of a sacred cacao grove during the Late Postclassic period (1000-1400 CE). The arm and bracelet of a figurine were found, plus several ceramic modeled cacao pods, and the remnants of cacao trees that were still growing.

“Now we have these links between religious structures and the religious crops grown in these sinkholes,” says Terry.

“Knowing that the cacao beans were used as currency, it means the sinkholes were a place where the money could be grown and controlled.” Above: Researcher Chris Balzotti climbs an ancient staircase discovered in a sinkhole near Coba, Mexico.

Sinkholes are common on the Yucatán Peninsula, created as karst processes – the dissolution of soluble rocks – that produce sunken pockets in the landscape. It would seem the Maya took full advantage of these natural hollows.

What’s more, many of the sinkholes are close to a 120-kilometer (70-mile) Maya highway that was once a busy trade route, suggesting that the people in charge of developing the highway also had a key role in the production of cacao.

This all adds to our growing knowledge of these fascinating people: whether it’s LIDAR scanning technology or brand-new soil analysis procedures, scientists are piecing together more and more details about how the peoples of the ancient Maya civilization lived.

The research has been published in the Journal of Archaeological Science: Reports.