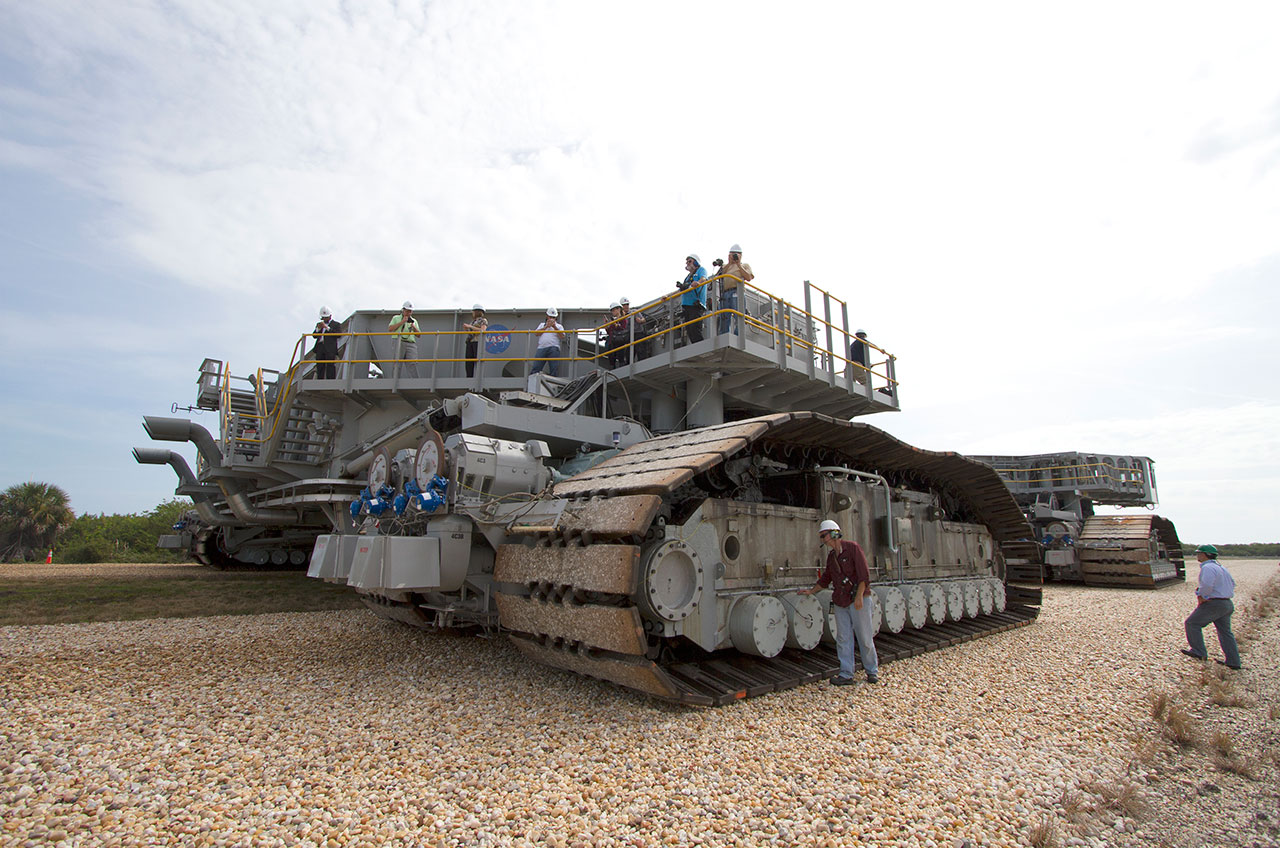 When NASA rolls its Artemis 1 moon mission out to the launch pad today (March 17), most eyes will be on the giant rocket gearing up for its first-ever flight. But the machine carrying it deserves some attention, too, for it’s a marvel in its own right.

On Artemis 1, NASA’s Space Launch System (SLS) megarocket will send an uncrewed Orion capsule on a roughly month-long journey around the moon. The mission is expected to lift off in May or June, but the SLS-Orion duo will trek to the pad at NASA’s Kennedy Space Center (KSC) in Florida today for testing, including a crucial “wet dress rehearsal” that will practice many of the procedures performed on launch day.

You can watch the Artemis 1 moon rocket’s roll out live here on Space.com, courtesy of NASA TV, beginning at 5 p.m. EDT (2100 GMT). It cold take up to 12 hours for the SLS rocket to make the trek to the pad.

The Artemis 1 SLS stands 322 feet tall (98 meters) tall and weighs 5.75 million pounds (2.60 million kilograms). It will travel about 4 miles (6.4 kilometers) during today’s rollout, which will start at KSC’s cavernous Vehicle Assembly Building (VAB) and end about 11 hours later at Launch Pad 39B.

It takes a beastly machine to haul such a huge load over that distance — and NASA’s crawler-transporter 2 (CT-2) is certainly a beast.

The crawler is “the most phenomenal thing I’ve ever seen,” Tom Whitmeyer, the associate administrator for exploration systems development at NASA headquarters in Washington D.C., said during a news conference on Monday (March 14).

CT-2 is one of the two crawlers that were built in 1965 to support NASA’s Apollo moon missions. They’re two of the largest machines ever constructed; each is 131 feet long by 114 feet wide (39.9 m by 34.7 m) — about the size of a baseball infield — and weighs more than 6 million pounds (2.7 million kg). Like tanks, the crawlers drive on treads rather than wheels. Each crawler has eight treads, each of which consists of 57 “shoes.” Each of those shoes weighs 2,100 pounds (953 kg), NASA officials wrote in a 2015 crawler feature story.

As you might guess from the name, speed is not a crawler strong suit; the two vehicles have a top speed of 1 mph (1.6 kph) when loaded and 2 mph (3.2 kph) when unburdened. Fuel efficiency is not a priority (or a possibility), either; CT-2 burns about 165 gallons of diesel fuel for every mile it travels, according to a NASA crawler fact sheet.

The crawlers hauled Apollo hardware from 1967 to 1972 and continued to serve after that, supporting the Skylab space station program, the Apollo-Soyuz Test Project in 1975 and NASA’s space shuttle program, which operated from 1981 to 2011.

After the shuttles retired, NASA upgraded and modified CT-2 to aid the agency’s efforts to return people to the moon and then get them to Mars. Artemis 1 will be a huge step in achieving those goals; it will mark the first flight of SLS, the rocket that will get NASA astronauts to deep-space destinations, and the first mission in the agency’s Artemis program, which is targeting a crewed lunar landing in the mid-2020s.

Today’s rollout won’t exactly bring CT-2 out of mothballs. The crawler has stretched its treads a fair bit over the past few years, hauling the SLS mobile launch tower to and from Pad 39B for testing, among other work.

CT-2 has traveled a total of 2,365 miles (3,806 km) to date, NASA officials said in the fact sheet. That’s  an impressive tally, given that the machine generally only travels 8 miles (12.8 km) per roundtrip.

CT-1’s odometer reads 1,960 miles (3,154 km), according to the 2015 NASA feature. That machine was earmarked for use by private companies after the shuttles retired. But those plans have not yet come to fruition, so the vehicle hasn’t done much driving recently and its fate remains somewhat uncertain.

Today’s rollout will kick off a roughly month-long stay on the pad for the Artemis 1 SLS and Orion. Technicians will likely perform the wet dress rehearsal about halfway through that stretch, NASA officials have said.

When their time on the pad is done, SLS and Orion will head back to the VAB for further testing and processing ahead of the “real” rollout for the Artemis 1 launch — and CT-2 will get the duo to their destination.