Roughly 13.8 billion years ago, our Universe was born in a massive explosion that gave rise to the first subatomic particles and the laws of physics as we know them.

About 370,000 years later, hydrogen had formed, the building block of stars, which fuse hydrogen and helium in their interiors to create all the heavier elements. While hydrogen remains the most pervasive element in the Universe, it can be difficult to detect individual clouds of hydrogen gas in the interstellar medium (ISM).

This makes it difficult to research the early phases of star formation, which would offer clues about the evolution of galaxies and the cosmos.

An international team led by astronomers from the Max Planck Institute of Astronomy (MPIA) recently noticed a massive filament of atomic hydrogen gas in our galaxy. This structure, named ‘Maggie‘, is located about 55,000 light-years away (on the other side of the Milky Way) and is one of the longest structures ever observed in our galaxy. 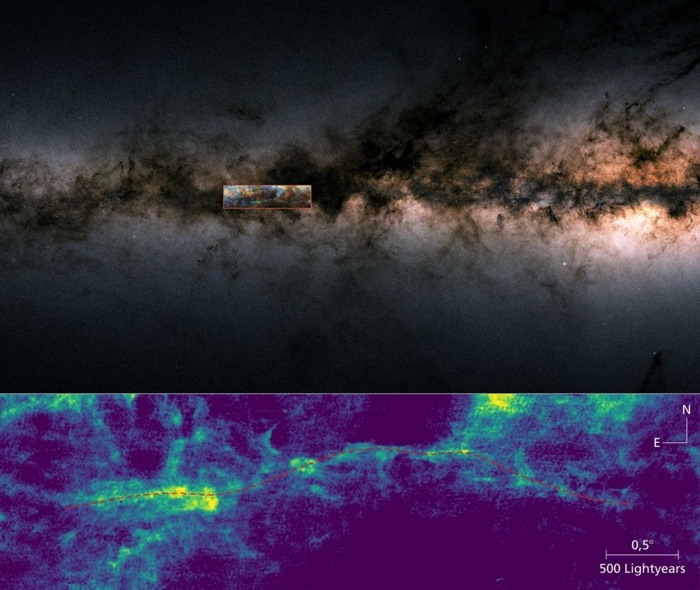 The study that describes their findings, which recently appeared in the journal Astronomy & Astrophysics, was led by Jonas Syed, a Ph.D. student at the MPIA.

The research is based on data obtained by the HI/OH/Recombination line survey of the Milky Way (THOR), an observation program that relies on the Karl G. Jansky Very Large Array (VLA) in New Mexico.

Using the VLA’s centimeter-wave radio dishes, this project studies molecular cloud formation, the conversion of atomic to molecular hydrogen, the galaxy’s magnetic field, and other questions related to the ISM and star formation.

Only the latter condenses into relatively compact clouds that will develop frosty regions where new stars eventually emerge.

The process of how atomic hydrogen transitions to molecular hydrogen is still largely unknown, which made this extraordinarily long filament an especially exciting find.

Whereas the largest known clouds of molecular gas typically measure around 800 light-years in length, Maggie measures 3,900 light-years long and 130 light-years wide. As Syed explained in a recent MPIA press release:

“The location of this filament has contributed to this success. We don’t yet know exactly how it got there. But the filament extends about 1600 light-years below the Milky Way plane. The observations also allowed us to determine the velocity of the hydrogen gas. This allowed us to show that the velocities along the filament barely differ.”

The team’s analysis showed that matter in the filament had a mean velocity of 54 km/s-1, which they determined mainly by measuring it against the rotation of the Milky Way disk. This meant that radiation at a wavelength of 21 cm (aka the “hydrogen line“) was visible against the cosmic background, making the structure discernible.

“The observations also allowed us to determine the velocity of the hydrogen gas,” said Henrik Beuther, the head of THOR and a co-author on the study. “This allowed us to show that the velocities along the filament barely differ.”

From this, the researchers concluded that Maggie is a coherent structure. These findings confirmed observations made a year before by Juan D. Soler, an astrophysicist with the University of Vienna and co-author on the paper.

When he observed the filament, he named it after the longest river in his native Colombia: the Río Magdalena (Anglicized: Margaret, or “Maggie”). While Maggie was recognizable in Soler’s earlier evaluation of the THOR data, only the current study proves beyond a doubt that it is a coherent structure.

Based on previously published data, the team also estimated that Maggie contains 8 percent molecular hydrogen by a mass fraction.

On closer inspection, the team noticed that the gas converges at various points along the filament, which led them to conclude that the hydrogen gas accumulates into large clouds at those locations. They further speculate that atomic gas will gradually condense into a molecular form in those environments.

“However, many questions remain unanswered,” Syed added. “Additional data, which we hope will give us more clues about the fraction of molecular gas, are already waiting to be analyzed.”

Fortunately, several space-based and ground-based observatories will become operational soon, telescopes that will be equipped to study these filaments in the future. These include the James Webb Space Telescope (JWST) and radio surveys like the Square Kilometer Array (SKA), which will allow us to view the very earliest period of the Universe (“Cosmic Dawn“) and the first stars in our Universe.