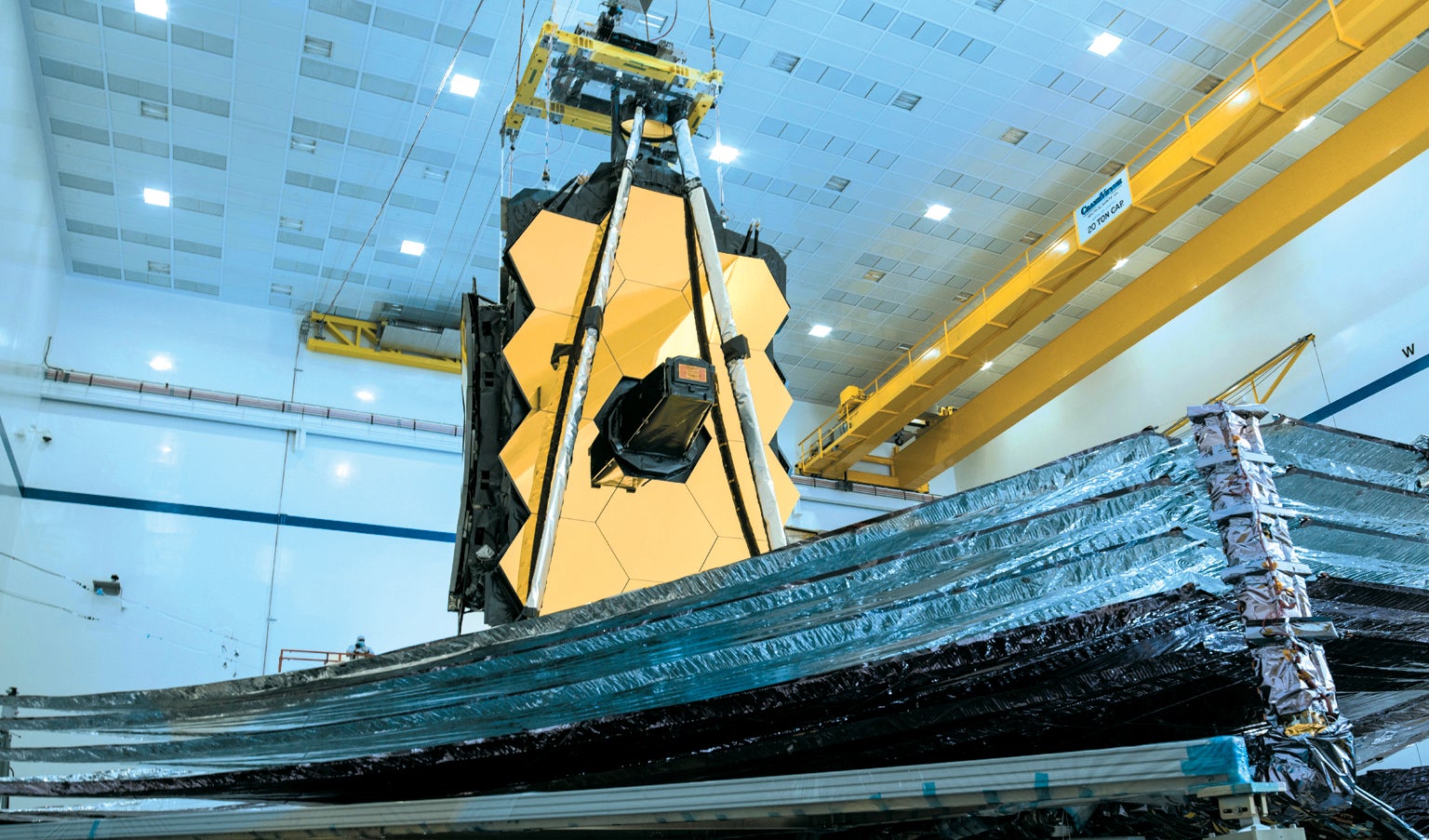 As a NASA photographer, Chris Gunn has been documenting the James Webb Space Telescope (JWST) from its early days. Since 2009 he has captured every milestone and witnessed nearly all the pieces of the spacecraft being put together and tested. The telescope is scheduled to reach space in December, and in the months that follow it will open its 6.5-meter-diameter eye on the sky. At this point, the subject of Gunn’s photography will become a photographer itself. “Seeing those first-light images is what’s most important to me,” Gunn says.

A joint project of NASA, the European Space Agency and the Canadian Space Agency, JWST will observe some of the oldest galaxies in the universe, image new planets and solar systems forming around other stars, and even probe the planets of our own system in new detail. The most ambitious and expensive telescope ever built, the $10-billion Webb is optimized to observe infrared light, the better to study objects from the distant and ancient universe. “We’ve been waiting for an observatory like this for a while,” says Knicole Colon, deputy project scientist for exoplanet science for JWST. “Webb will see back to the very earliest galaxies, as far back in time as we can, and the sensitivity of the telescope will let us see deeper into exoplanet atmospheres than we’ve ever seen.”

To avoid contaminating heat from the sun and Earth, Webb will fly to a vantage point 1.5 million kilometers from our planet, where it will unfurl a sun shield the size of a tennis court for additional protection. This delicate maneuver, as well as the deployment of its primary and secondary mirrors, must go perfectly—sending astronauts to repair the telescope, as happened with Hubble, is not an option. “I am extremely confident that our engineers have really done a great job of testing everything they can possibly test,” says Heidi Hammel, an interdisciplinary scientist for JWST. “At some point you just have to fish or cut bait. We’re ready to go.”

JWST’s road to launch has been rocky. Early on the observatory was supposed to cost no more than $1 billion and lift off around 2007, but it was plagued by management problems, technical challenges, budget overruns and schedule delays. When the spacecraft finally launches on an Ariane 5 rocket from French Guiana, the thousands of scientists, engineers and others who have toiled on it will be hoping for a smooth ride. “For me, this is a huge, huge chunk of my life,” Gunn says. “It’s almost akin to raising my child but obviously a little bit different because there have been so many other parents.”

MIRROR ARRIVAL: Technicians inspect one of the 18 hexagonal mirror segments that will form Webb’s primary mirror. The beryllium pieces, each coated with 0.12 ounce of gold, were designed to be exceptionally strong yet light at just 20 kilograms each. They are mounted to a foldable structure that will be packed tight into the rocket for liftoff and then open in space. “This [moment] was extremely memorable because most of the people in the photograph had never seen the mirrors before in person,” Gunn recalls. “The mirrors came in initially one by one, then two and three at a time. Each inspection lasted for an hour or an hour and a half.”

SUPER-CLEAN ROOM: Before JWST’s disparate parts all came together, its mirrors and instruments were carefully assembled in the High Bay Clean Room at NASA’s Goddard Space Flight Center in Greenbelt, Md. The 1.3-million-cubic-foot room, one of the largest of its kind in the world, includes an entire wall of HEPA air filters to stop contaminants such as dirt and dust from reaching the telescope’s sensitive optics.

FRAGILE LOAD: Workers transport one of the observatory’s mirror segments, which arrived at Goddard in specially constructed shipping canisters from their manufacturer, Ball Aerospace in Colorado. Each individual mirror is 1.32 meters wide; collectively they produce an observing area six times larger than the Hubble Space Telescope’s mirror.

COLD AND AIRLESS: To make sure JWST can withstand the frigid vacuum conditions of space, its instruments and optics underwent 100 days of cryogenic testing inside Chamber A, a massive thermal-vacuum testing room at NASA’s Johnson Space Center in Houston. A 40-ton circular door, 12.2 meters wide, encloses the largest high-vacuum, cryogenic-optical test chamber in the world, which was used in the 1960s to assess hardware for the Apollo moon missions.

GOLDEN CAGE: Before the real flight hardware was built and tested, an ersatz version of JWST’s optics called the Optical Telescope Element Simulator was subjected to spacelike conditions in the Space Environment Simulator at Goddard. There gold thermal blankets encase a system of supports and thermal-control devices, including a group of liquid-nitrogen panels that help to keep the simulator at around 100 kelvins, to match the temperature extremes it will experience beyond Earth.

REPEATED SCRUTINY: A technician carefully handles the gold foil used to enshroud instruments during cryogenic testing in the Space Environment Simulator. This intensive, repeated testing is meant to ensure JWST will work once it reaches its destination, where scientists will have no recourse, short of software fixes, to intervene if something goes wrong. “It’s definitely a complicated observatory, and it’s something that we cannot service, like we can service Hubble,” Colon says. “But Webb has a lot of redundancies in its mechanical systems, and people have been very careful in testing every little aspect of it.”

EXTRA BLANKETS: Webb’s elaborate sunshield is not the only thing that will help keep the telescope cold. A protective layer of blanketing behind the primary mirror, called a frill, will block unwanted light and heat from reaching the infrared sensors. Because the observatory is open—it lacks the usual cylindrical canister surrounding its optics that most telescopes have—this extra layer will help filter out even faint contamination from stars and galaxies behind the mirror.

LIGHTS OUT: Technicians examine JWST’s mirrors during a “lights-out” test. “It’s an evening shot because they had to do this test in the dark,” Gunn says. “I’ve always wanted my images to speak to the amount of work that’s actually going into the project. When people talk about Webb and how much time it’s taken to build, I think if they had an appreciation for all the work that’s gone into it, the time wouldn’t factor in the way it does.”