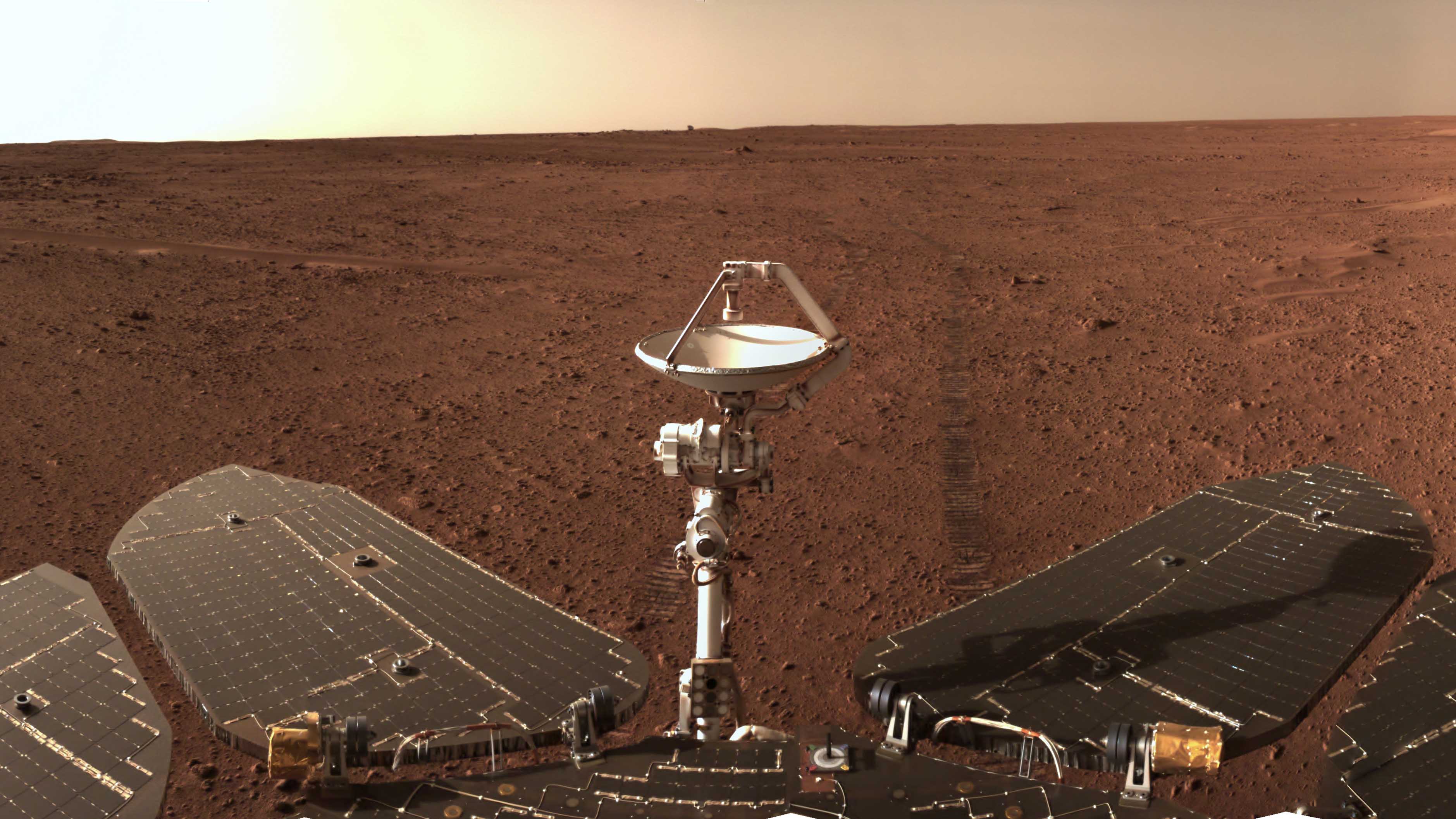 China’s first Mars rover reveals how weather and ancient water changed the surface of the largest impact basin on Mars.

China’s Zhurong rover landed in the Utopia Planitia, a 2,000-miles-wide (3,300 kilometers) basin in the Northern Hemisphere of Mars, in May 2021. Since then, the rover has been studying local geology, chemical composition of rocks, and local weather conditions using its six scientific instruments.

A new study based on data from Zhurong’s first 60 sols (roughly 62 Earth days) on the planet reveals how weather and interaction with water altered the rocks around Zhurong’s landing site over millions of years.

In the study, a team of researchers led by Liang Ding of the Harbin Institute of Technology in Northeast China, used images from the rover’s Navigation and Topography Cameras (NaTeCam) to look at the structure of the rocks. In many of the studied rocks, the researchers found grooves and etchings from particles carried by wind, but also flakes which appear to be evidence of interactions with water or brines.

“The rock textures observed at the site thus far may indicate both the presence of physical weathering – for example, impact sputtering, wind erosion and potential freeze–thaw weathering – and aqueous interactions involving salt and brine,” the authors said in the paper, adding that the site offers opportunities for follow-up investigations.

“These rock and soil targets provide excellent opportunities to peek into the aqueous history and climate evolution of the northern lowlands, and shed light on the habitability evolution of Mars.”

Kirsten Siebach, an assistant professor at the Rice University Department of Earth, Environmental, and Planetary Sciences, agrees with the assessment by the Chinese team.

“It looks like there’s surface evidence for something like a contraction-expansion process, which can be from brine or a freeze/thaw effect or really significant temperature changes,” she told Space.com. “That causes the rocks to kind of flake apart. This is consistent with what we’ve seen at other landing sites on Mars where the rocks are exposed differently than on Earth.”

Chemistry data would help provide more information on what has been going on in the area. Zhurong has a Laser Induced Breakdown Spectroscopy (LIBS) instrument which could fire its laser to create a tiny amount of plasma from the target and analyze its composition. The new paper does not make use of any LIBS data, nor states if it was collected from the rock specimens.

Siebach also underlines the value of having images and data from a new landing site on Mars.

“By having 9 to 10 landing sites across the surface of Mars, we’re starting to get a better sense for what processes are relatively or seem to be global,” Siebach said.

Siebach notes that the paper contains a lot of valuable information on the physics of the soil and how the ground reacts to the rover driving over it and its landing equipment. “This is actually really important if you want to land there with humans.”

China is planning a Mars sample return mission, potentially launching in 2028, but has not yet released information on candidate landing sites.

NASA’s Viking 2 lander set down in northern Utopia Planitia in 1976 among numerous rocks, while Zhurong is operating in much less complicated terrain.

Zhurong has already completed its primary mission of 90 sols. But the rover is continuing its way to the south of its landing site, collecting data as it goes.

Meanwhile the Tianwen 1 orbiter which carried Zhurong from Earth to Mars marked its first anniversary in orbit around the Red Planet on Feb. 10. The orbiter began its dedicated science mission back in November while also helping to relay data from the rover back to Earth.

The paper was published on Tuesday (March 7) in the journal Nature Geoscience.