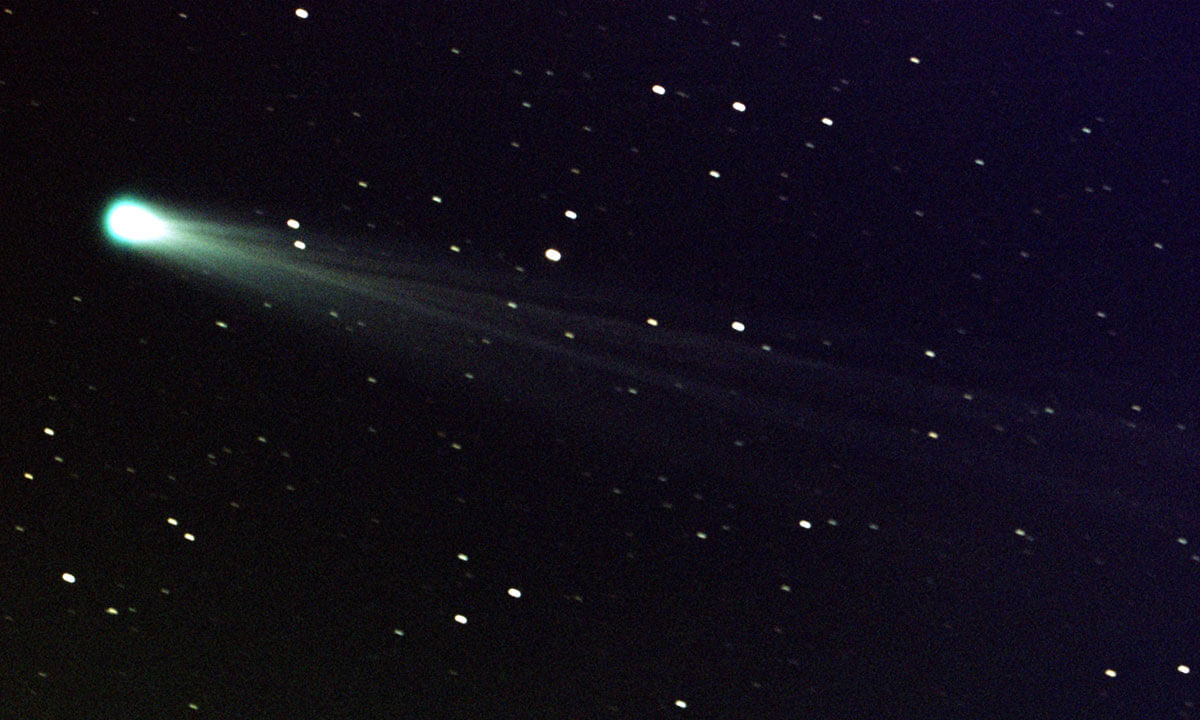 Many comets’ heads glow a bright green as they stream across the night sky — but why?

Comets, comprised of frozen gases, rocks and dust, are the leftover remains from the formation of the solar system about 4.6 billion years ago. The icy bodies heat up very quickly as they approach the sun, causing the solid ice to turn directly into gas via a process called sublimation, which intensifies the bright green glow.

However, the green glow appears only around the head of some comets, but never in the tails trailing behind them — and now a new study from the University of New South Wales (UNSW) Sydney in Australia may finally reveal why.

Using a vacuum chamber and lasers, the researchers were able to recreate the chemical reaction that occurs when ultraviolet radiation from the sun breaks apart a compound called diatomic carbon (also known as dicarbon or C2). The reaction causes the icy bodies to appear green. This process, called photodissociation, was originally theorized by physicist Gerhard Herzberg in the 1930s, but has been hard to test until now.

Dicarbon is made up of two carbon atoms and is highly reactive and unstable. It is only found in extremely energetic or low-oxygen environments like stars, comets and the interstellar medium. However, on a comet, dicarbon can’t exist until the body gets close to the sun. The sun heats the comet’s organic matter, causing it to evaporate and enter the coma, which is the gassy envelope around the comet. The sunlight then breaks up the larger organic molecules, creating dicarbon, according to a statement from UNSW Sydney.

As a comet gets even closer to the sun, photodissociation breaks up the fresh dicarbon before it can move very far from the nucleus, or head, of the comet. So while the comet itself appears brighter as it approaches the sun, the radiant green coma shrinks as the dicarbon is broken up by sunlight. In turn, the dicarbon never makes it to the comet’s tail, which is why that part of the comet doesn’t glow green. For the first time, researchers were able to study this chemical interaction in a controlled environment on Earth.

“We’ve proven the mechanism by which dicarbon is broken up by sunlight,” Timothy Schmidt, senior author of the study and a chemistry professor at UNSW Science, said in the statement. “This explains why the green coma — the fuzzy layer of gas and dust surrounding the nucleus — shrinks as a comet gets closer to the sun, and also why the tail of the comet isn’t green.”

To create the dicarbon molecules, the researchers took perchloroethylene, a compound of two carbon atoms and four chlorine atoms, and used ultraviolet lasers to remove the chlorine atoms. The resulting dicarbon molecules were then sent through a gas beam in a vacuum chamber about 6.5 feet (2 meters) long. In the vacuum chamber, the dicarbon was subjected to more radiation from ultraviolet lasers, breaking apart the carbon atoms while researchers could measure the speed of each atom, and in turn the energy that had been stored in the bond joining them.

“Dicarbon comes from the breakup of larger organic molecules frozen into the nucleus of the comet — the sort of molecules that are the ingredients of life,” Schmidt said in the statement. “By understanding its lifetime and destruction, we can better understand how much organic material is evaporating off comets. Discoveries like these might one day help us solve other space mysteries.”

However, the experiment was particularly complex, given the UV lasers were invisible to human operators and the high reactivity of the dicarbon molecules, according to the statement.

“We were about to give up. It took so long to make sure everything was precisely lined up in space and time,” Jasmin Borsovszky, lead author of the study and former UNSW student, said in the statement. “The three lasers were all invisible, so there was a lot of stabbing in the dark — quite literally.”

“It’s extremely satisfying to have solved a conundrum that dates back to the 1930s,” Schmidt added.

Their findings, published Dec. 21 in the Proceedings of the National Academy of Sciences (PNAS), may also reveal new clues about how comets delivered carbon and other building blocks of life to Earth, the researchers said.