A new ultra-powerful scan of the Great Pyramid of Giza using cosmic rays could reveal the identities of two mysterious voids inside.

The largest of the two voids is located just above the grand gallery – a passageway that leads to what may be the chamber of the pharaoh Khufu – and is about 98 feet (30 meters) long and 20 feet (6 m) in height, according to previous pyramid scans.

Archaeologists are uncertain as to what they will find in the void, which could be one large area or several small rooms, they said. They also hope to find out the function of that void; the most fantastic possibility is that the opening is the hidden burial chamber of Khufu. A more mundane possibility is that the cavity played some role in the building of the pyramid.

Constructed for the pharaoh Khufu (reign circa 2551 BCE to 2528 BCE), the Great Pyramid of Giza is the largest pyramid ever constructed in ancient Egypt and is the only surviving wonder of the ancient world.

Related: Photos: Looking inside the Great Pyramid of Giza

Constructed for the pharaoh Khufu (reign circa 2551 BCE to 2528 BCE), the Great Pyramid of Giza is the largest pyramid ever constructed in ancient Egypt and is the only surviving wonder of the ancient world.

Between 2015 and 2017, the “Scan Pyramids” project ran a series of scans that analyzed muons – cosmic particles that regularly fall on Earth – to detect any voids. Those scans revealed both of the voids in 2017.

Now, a new team is planning to scan the Great Pyramid again, but this time with a more powerful system that will analyze muons in greater detail. Muons are negatively-charged elementary particles that form when cosmic rays collide with atoms in Earth’s atmosphere.

These high-energy particles constantly rain down on Earth (yes, they’re harmless); because they behave differently when interacting with say stone versus air, researchers can use super-sensitive detectors to pinpoint the particles and map areas they can’t physically explore, as with the Great Pyramid. 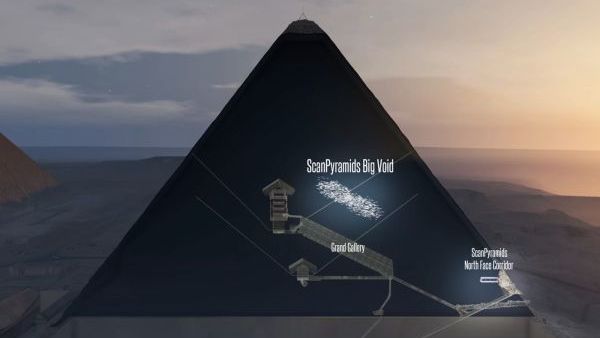 An illustration of the inside of the Great Pyramid of Giza. (ScanPyramids mission)

“Since the detectors that are proposed are very large, they cannot be placed inside the pyramid, therefore our approach is to put them outside and move them along the base. In this way, we can collect muons from all angles in order to build up the required data set,” the team wrote in the paper.

“The use of very large muon telescopes placed outside [the Great Pyramid] can produce much higher resolution images due to the large number of detected muons,” they added.

The detectors are so sensitive, the researchers pointed out, they might even reveal the presence of artifacts inside of the voids. If “a few m3 is filled with material [such as pottery, metals, stone or wood], we should be able to distinguish that from air,” Alan Bross, a scientist at the Fermi National Accelerator Laboratory who is co-author of the paper, told Live Science in an email.

The team has received approval from the Egyptian Ministry of Tourism and Antiquities to conduct the scans, but they still need funds to build the equipment and place it beside the Great Pyramid.

“We are looking for sponsors for the full project,” said Bross. “Once we have full funding, we believe it will take [about] two years to build the detectors,” Bross said. Currently, the group only has enough funding to conduct simulations and design some prototypes, Bross said.

Once the telescopes are deployed, they will need some time to gather data.

“Once we deploy the telescopes after about one year of viewing time, we expect to have preliminary results. We will need between two and three years of viewing to collect enough muon data to reach full sensitivity for the study of [the Great Pyramid],” said Bross.