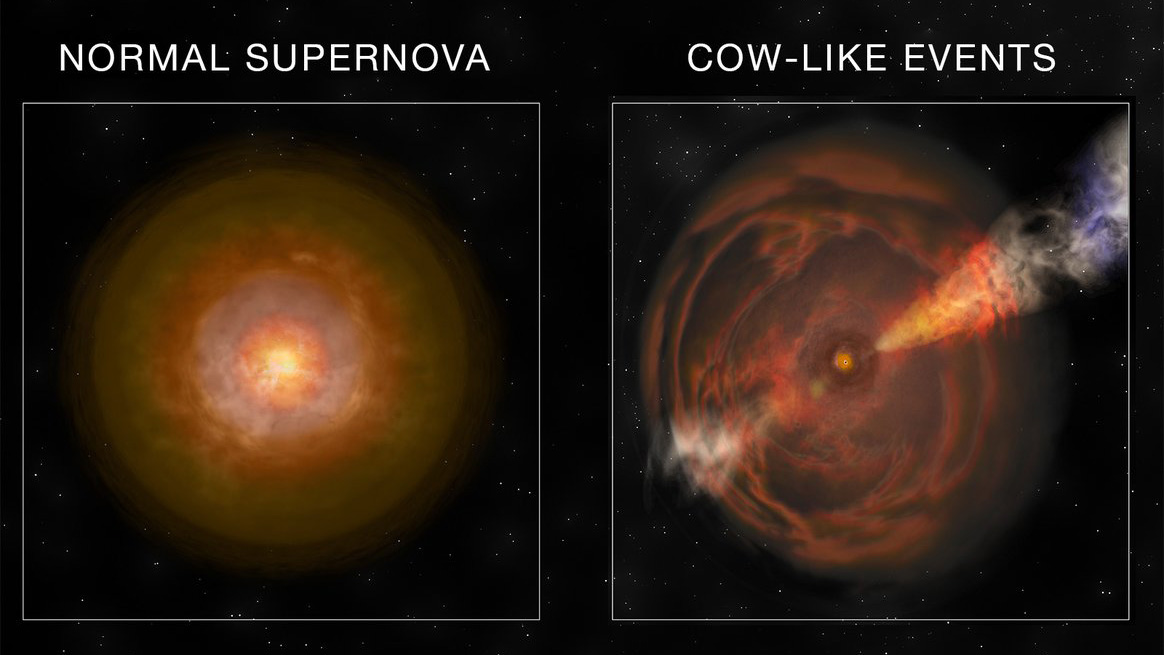 Astronomers have spotted the brightest “Cow” supernova ever seen in X-rays, providing shining new evidence that the recently discovered phenomenon might be driven by an emerging black hole or a neutron star.

Cow supernovae are a newly-labeled subclass of the explosive events, which occur when giant stars reach the end of their lives; they run out of fuel and collapse, triggering powerful explosions. Depending on the original star’s size, the explosion can give birth to either a black hole or a neutron star. These are among the brightest events that can be observed in the universe, and Cow class events are especially brilliant, even brighter than a regular supernova.

Scientists believe that what makes Cows different is the activity of the black hole or neutron star at their center. In normal supernovas, these seem to be quite inactive and shrouded in material ejected by the explosion, the scientists said in a statement. But in “Cows”, these central objects appear active, like an internal engine, emitting much higher amounts of high-energy X-ray radiation.

The first such supernova, called AT2018cow, was detected in 2018 and it shone 10 times brighter in the visible light than a typical supernova. Though, while it was incredibly bright, it also faded very quickly. The class designation of Cow comes from the randomly generated name given to the event.

Related: Did scientists solve the mystery of the super-bright exploding ‘cow’ in space?

This more recently spotted Cow event, which was discovered in July 2020, received the name AT2020mrf. It was only the fifth Cow class supernova detected since 2018 and the first to be initially spotted in X-rays rather than in visible light. Astronomers from California Institute of Technology (Caltech) first detected the brightening from the event in observations by the Russian-German eROSITA spacecraft, which maps the entire sky in X-rays. They later made additional measurements using the Zwicky Transient Facility (ZTF) at Caltech’s Palomar Observatory and NASA’s Chandra X-ray Space Telescope.

The data from eROSITA revealed an explosion 20 times brighter in X-rays than the 2018 Cow event. Data captured one year later by Chandra showed that the aftermath of the explosion was still visible, emitting 200 times more X-ray light than that detected from the original Cow event over a similar timeframe.

“When I saw the Chandra data, I didn’t believe the analysis at first,” Yuhan Yao, a graduate astronomy student at Caltech who led the latest observations, said in the statement. “I reran the analysis several times. This is the brightest Cow supernova seen to date in X-rays.”

The intensity of the X-ray glow coming from the 2020 event seems to support the theory that an active black hole or a neutron star may have just been born.

“The large amount of energy release and the fast X-ray variability seen in AT2020mrf provide strong evidence that the nature of the central engine is either a very active black hole or a rapidly spinning neutron star called a magnetar,” Yao said. “In Cow-like events, we still don’t know why the central engine is so active, but it probably has something to do with the type of the progenitor star being different from normal explosions.”

The observations of the 2020 Cow event also suggest that there is variety even among “Cows,” said Yao. She added that finding more members of the class will help scientists narrow in on the engines at their centers

The study has been submitted for publication in the The Astrophysical Journal and presented at the 239th meeting of the American Astronomical Society on Jan. 10.