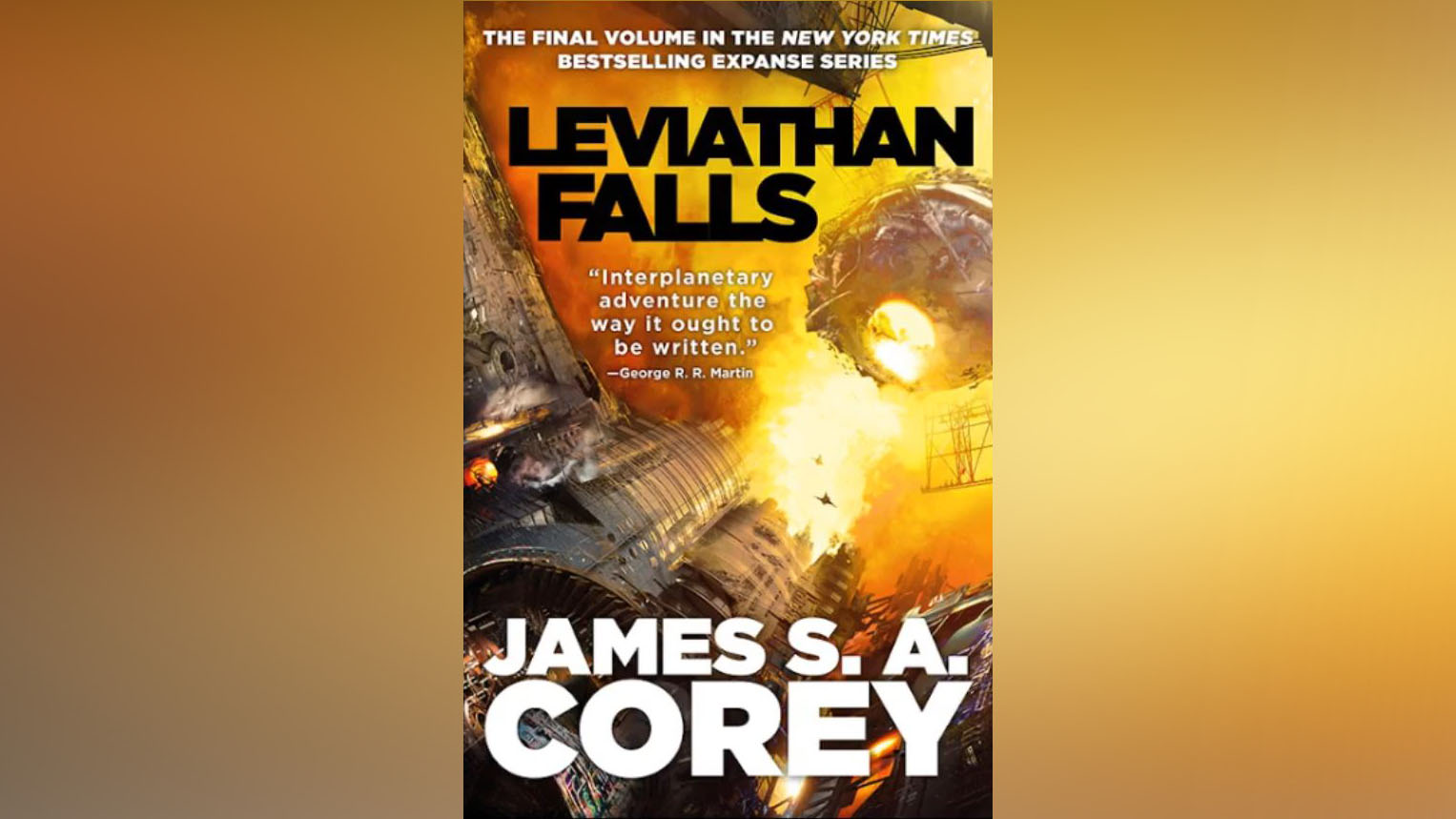 The end of a beloved novel series is always a melancholy occasion, and so it is with the ninth and final entry for authors Daniel Abraham and Ty Franck’s (under the pen name James S.A. Corey) multi-layered military space opera, “The Expanse.”

After ten years of intense research, plot construction, worldbuilding, and character development, the award-winning series that all began with 2001’s “Leviathan Wakes” and eventually spawned a hit sci-fi show on SYFY and Amazon Prime concludes with the release of “Leviathan Falls” (Orbit, 2021).

The storyline picks up following the events of 2019’s “Tiamat’s Wrath” as the oppressive Laconian Empire crumbles and 1,300 systems are liberated from the iron-fisted rule of Winston Duarte. Deep inside the planet-less realm of Adro, Elvi Okoye attempts to comprehend more about the mysterious gate builders and what ancient enemy wiped them out. Meanwhile, Colonel Aliana Tanaka hopes to track down Duarte’s lost daughter while James Holden and his valiant Rocinante crew grapple with the task of steering ruined humanity towards a bright future.

Related: ‘The Expanse’ is back on Amazon Prime for sixth and final season

Space.com spoke with Abraham and Franck on bringing the series home for a proper landing, their advice to aspiring sci-fi writers, the importance of the books’ dramatic cover art, and what’s next on their creative plates after “The Expanse.”

Space.com: Now that you’ve had time to process turning in the final book in “The Expanse” series, how would you encapsulate this 10-year creative run?

Daniel Abraham: Well, it was awesome and it was weird and it’s great to be lucky. I’m always delighted to have things go well when they go well. I’d love to say that this is all stuff that we deserve and earn but the truth of the matter is, so much of this is just happy happenstance. I’m glad we got to write it. It’s incredibly gratifying that this many people came along for the ride.

Space.com: Can you take us on a speed run of “Leviathan Falls” and what readers can expect?

Abraham: We’re going to pay off the promises we’ve been making in the first eight books and complete the story. That’s all we can really promise. And it is the last one. We’re not leaving it open for sequels and prequels and side stories. We wanted to tell one complete story and have a satisfying finish and hopefully that’s what we’re delivering.

Ty Franck: Yep, this is it.

Space.com: There’s one more “The Expanse” novella coming in 2022 that will be included in the “Memory’s Legion” collection. What can you reveal about what that story contains?

Abraham: This is all the short fiction we’ve done in “The Expanse” universe, with one exception. Included in that book is one final novella that’s the coda for the whole project, and the one that happens after the action in “Leviathan Falls.” It summarizes what we had in mind for the whole thing.

Franck: Yeah, and it’s got all the rest of “The Expanse” short fiction which had not been in physical print before this. Everything was E-book before this. And Daniel and I wrote some other stuff for the collection like author’s notes for each of the stories and a few other things like that.

Space.com: You’ve brought in other book series to their end. Did this sci-fi series feel any different than other novel projects you delivered?

Abraham: It’s one of those things that in order to do the job I do, I need to already be moving on to the next thing before the last one is completely finished. It’s really satisfying to bring something to a good ending, and I think we have a pretty good ending for “The Expanse.” And I’m already working on the next project. It’s a little sad, a little melancholy, and it’s also the last album and we’re already recording the next one.

Space.com: Artist Daniel Dociu and Art Director Lauren Panepinto worked wonders with the amazing series cover art. What are your thoughts on their contributions to the success of The Expanse?

Abraham: We thank them quite often! Daniel has done the cover for every single one of our books. We take every opportunity we can to call him out and thank him for that because they were very evocative. A big part of the reason for the success of the first book is Daniel’s cover. And Lauren’s team in the design department has done great work for us with every book. So we’re thrilled with the Orbit art crew.

Franck: And Daniel also did all of the art for the special edition versions of the books that came out from Subterranean Press. He’s doing the cover art for my solo fantasy stuff now too.

Abraham: Again, it’s really nice being lucky. It’s great having the good fortune to come across people who are this talented and are willing to come and play in your sandbox. We should also shout out to Jefferson Mayes, who did the recordings for all the audiobooks. He’s an amazing performer and did a lot to help the project by being as good as he was at that part.

Space.com: What words of wisdom would you offer for new or experienced writers trying to build compelling worlds in science fiction, fantasy, and horror?

Franck: Write the book you want to write. If you want hard science fiction, if you want to follow in the footsteps of Andy Weir and writers like that and dive in and do the engineering-level details of your world, then do that. But only do it because that’s what you want to do and you get off on writing the kind of story.

If you want to write fluffy fantasy sci-fi like Roger Zelazny and “Lord of Light,” then write that kind of thing. Because the truth is, “The Martian” and “Lord of Light” are two of the best science fiction books ever written, and they are completely different styles. There is no right version of science fiction. The only right version is the one you’re most excited by. It’s infectious. If you’re excited about the idea, then it comes across on every page and gets the reader excited. It doesn’t matter what style of sci-fi you’re doing.

Space.com: What do you hope the ultimate legacy of “The Expanse” is and how has it altered the landscape of the sci-fi genre?

Abraham: I hope that it inspires a bunch of folks to write their own science fiction and to write their own worlds. And to do with us, what we did with Alfred Bester and Larry Niven and guys that came before us. Science fiction and genre fiction is a conversation that goes across generations. We said our bit, and I’m looking forward to seeing what the next round of folks has to say.

Franck: I think it’s pretty arrogant to decide for yourself that you’ve changed science fiction in some way with your book. The thing that I do feel like happened that I’m very happy with, is we’ve had a lot of respected writers, whose projects I think are some of the best ones to come out in the last ten years, tell us that the success of “Leviathan Wakes” allowed them to pitch their space opera. They had been told before that space opera didn’t sell and were discouraged from pitching their space opera projects. When “Leviathan Wakes” came out and did very well, suddenly publishers were open to receiving space opera pitches so people were able to sell stuff. If that’s the only thing we accomplished, then I feel it’s pretty awesome.

Space.com: You have a new space fantasy series you’re both writing for Orbit. Anything you can tease about that upcoming project?

Abraham: We have an outline for it, and some chapters we’ve worked on and it’s looking pretty cool to me. I’m always hesitant to share titles because half of the titles I take to the publisher they change before it hits print. It’s kind of the far end of space opera from “The Expanse.” It’s lots of aliens and a huge galactic empire and huge galactic war and a lot of the philosophical things you can engage with at that scale that are really fun. I’m really looking forward to this one.

“Leviathan Falls” is available now. The sixth and potential final season of “The Expanse” premiered Dec. 10 on Amazon Prime.