Until recently, one of the biggest myths in science was that all dinosaurs have been extinct for the past 65 million years. But thanks to new fossil discoveries that filled in our knowledge about avian dinosaurs, we now know that only some dinosaurs went extinct following an asteroid collision with Earth – others survived and gave rise to the birds we live with today.

To figure out how this evolution occurred, researchers in Chile carried out a strange but fascinating experiment in 2016. They manipulated the genes of regular chickens, causing them to develop tubular, dinosaur-like fibulas on their lower legs – one of the two long, spine-like bones you’ll find in a drumstick.

In avian dinosaurs such as the Archaeopteryx, the fibula was a tube-shaped bone that reached all the way down to the ankle. Another bone, the tibia, grew to a similar length alongside it.

As evolution progressed through to a group of avian dinosaurs known as the Pygostylians, the fibula became shorter than the tibia and sharper and more splinter-like towards the end, and it no longer reached the ankle.

While modern bird embryos still show signs of developing long, dinosaur-like fibulae, as they grow, these bones become shorter, thinner, and also take on the splinter-like ends of the Pygostylian bones, and never make it far enough down to the leg to connect with the ankle.

Researchers, led by João Francisco Botelho from the University of Chile, decided to investigate how this transition from a long, tubular fibula in dinosaurs to a short, splinter-like fibula in birds actually came to be.

They achieved this by inhibiting the expression of a gene called IHH or Indian Hedgehog (seriously), which saw their chickens continue to grow the long, dinosaur-like fibulae that originated in their embryonic form.

In doing so, the team discovered something bizarre. Regular bone development sees cell division and therefore growth halt in the shaft long before the ends stop growing, but in modern chickens, the growth of the fibula halts first at the ends.

This means the fibulae of modern chickens are actively blocked from reaching the lengths of their ancient relatives’ bones. 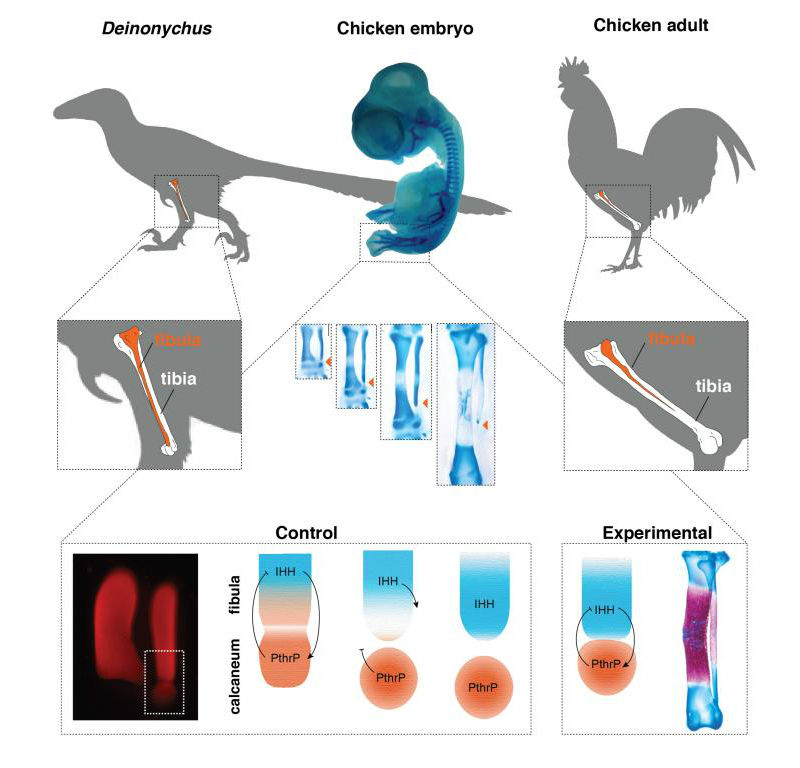 Publishing their observations in the journal Evolution in February 2016, the researchers suggested that the early maturation of the lower end of the fibula in modern chickens is prompted by a bone in the ankle, called the calcaneum.

“Unlike other animals, the calcaneum in bird embryos presses against the lower end of the fibula,” the team explained in a press release at the time. “They are so close, they have even been mistaken for a single element by some researchers.”

The team suggested that in regular chickens, interactions between the calcaneum and the end of the fibula result in signals that are similar to the ones that prompt the bone shaft to stop growing, preventing the fibula from reaching anywhere near the ankle bone.

But when the Indian Hedgehog gene was turned off, the calcaneum strongly expresses the gene Parathyroid-related protein (PthrP), which allows for growth at the ends of bones. This caused their chickens to grow long fibulae that connected with the ankle, just like they would in the Archaeopteryx.

“Experimental downregulation of IHH signaling at a postmorphogenetic stage led to a tibia and fibula of equal length,” the team wrote in the report. “The fibula is longer than in controls and fused to the fibulare, whereas the tibia is shorter and bent.”

Unfortunately, the ‘dino-chickens’ did not make it to the hatching stage, but the point of the research wasn’t to raise them into adulthood but to figure out the biological processes that led to the transition from dinosaur legs to modern bird legs.

“The experiments are focused on single traits to test specific hypotheses,” one of the team, Alexander Vargas, explained. “Not only do we know a great deal about bird development, but also about the dinosaur-bird transition, which is well-documented by the fossil record. This leads naturally to hypotheses on the evolution of development, that can be explored in the lab.”

This wasn’t the first time dinosaur traits have been ‘recreated’ in modern chickens. In 2015, the same team achieved the growth of dinosaur-like feet on their chickens, and a separate team in the US managed to grow a dinosaur-like ‘beak’ on its chicken embryos.

Watch below to see how lead researcher and renowned paleontologist, Jack Horner, managed to do it:

The research was published in Evolution.

A version of this article was first published in March 2016.