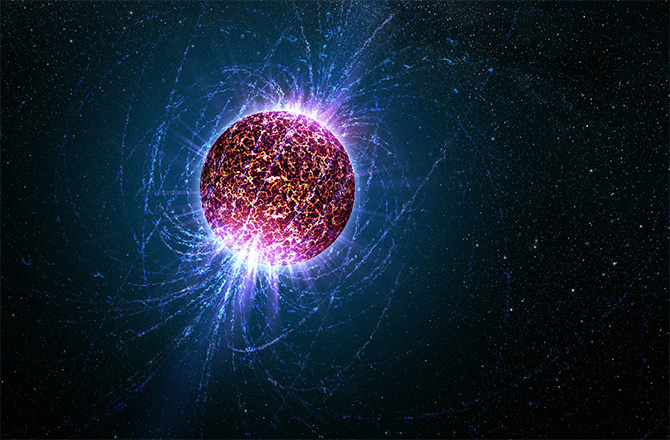 General relativity has withstood perhaps its toughest challenge to date.

The theory, which Albert Einstein published in 1916, revolutionized our understanding of physics and the cosmos. It explains gravity as a consequence of space-time’s flexibility: Massive objects warp space-time, creating depressions around which other bodies orbit.

Scientists have put general relativity to the test repeatedly over the past 105 years, trying to find situations or circumstances in which it comes up short. They have not yet found one.

Related: What is gravity?

In a new study, researchers report the results of one of the most ambitious and involved challenges to general relativity ever undertaken. They analyzed observations of a double-pulsar system made by seven different radio telescopes around the world from 2003 to 2019.

Pulsars are a type of neutron star, or superdense stellar corpse, that emit powerful beams of radiation and particles from their magnetic poles. These beams are continuous, but they appear to pulse (hence the name) because pulsars are rotating; this light can be seen only when a pole is pointed at Earth.

The pulsar pair that the research team investigated lies about 2,400 light-years from Earth. One of the pulsars spins 44 times per second, whereas the other completes one rotation every 2.8 seconds. The two objects orbit a common center of mass once every 147 minutes, each of them moving through space at around 620,000 mph (1 million kph), team members said.

“Such fast orbital motion of compact objects like these — they are about 30% more massive than the sun but only about 24 kilometers [15 miles] across — allows us to test many different predictions of general relativity — seven in total!” study co-author Dick Manchester, of the Commonwealth Scientific and Industrial Research Organisation (CSIRO), Australia’s national science agency, said in a statement.

And the quality matched the quantity: The study achieved levels of precision unprecedented for a general relativity test, team members said.

“Apart from gravitational waves and light propagation, our precision allows us also to measure the effect of ‘time dilation’ that makes clocks run slower in gravitational fields,” Manchester said. “We even need to take Einstein’s famous equation E = mc^2 into account when considering the effect of the electromagnetic radiation emitted by the fast-spinning pulsar on the orbital motion.”

All seven of the tested predictions were borne out, the study found. So general relativity remains undefeated — but that doesn’t mean that researchers should stop trying to find cracks in it.

“General relativity is not compatible with the other fundamental forces, described by quantum mechanics. It is therefore important to continue to place the most stringent tests upon general relativity as possible, to discover how and when the theory breaks down,” co-author Robert Ferdman, a physicist at the University of East Anglia in England, said in the same statement.

“Finding any deviation from general relativity would constitute a major discovery that would open a window on new physics beyond our current theoretical understanding of the universe,” Ferdman added. “And it may help us toward eventually discovering a unified theory of the fundamental forces of nature.”

The new study was published today (Dec. 13) in the journal Physical Review X.