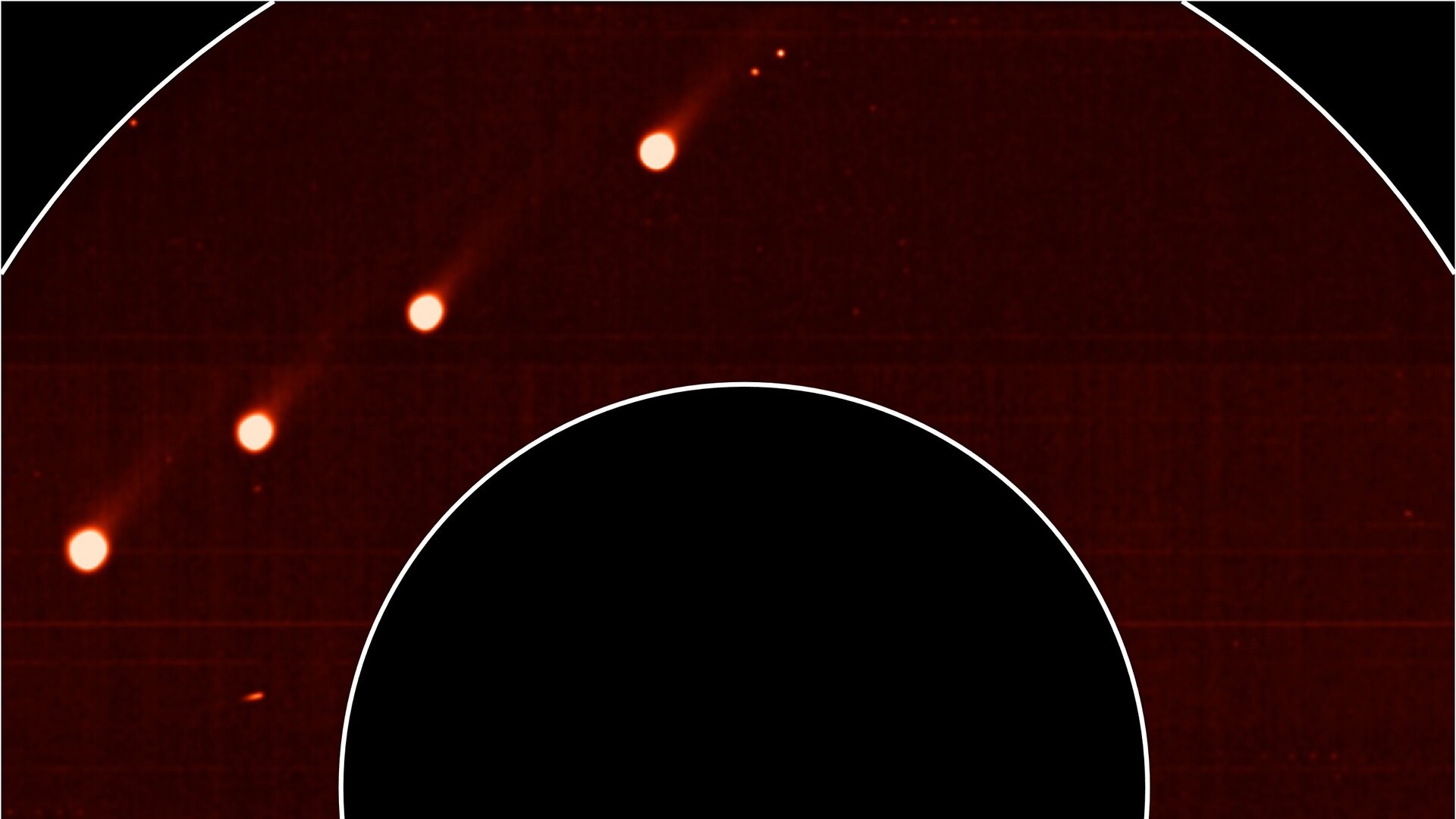 As Comet Leonard bid farewell to Earth and flew past Venus, a sun-studying spacecraft flew through the comet’s long tail, giving humans a new perspective on the icy wanderer.

Discovered last January and also known as Comet C/2021 A1, Comet Leonard was perhaps the most spectacular visitor for skywatchers in 2021. The object put on quite a show as it zoomed toward the sun, particularly in the days leading up to its closest approach to Earth on Dec. 12. And coincidentally, the European Space Agency (ESA) Solar Orbiter mission flew through the comet’s tail as the spacecraft continued its own journey to study the sun, offering scientists quite a bonus.

“The big advantage is that for basically no effort on the spacecraft’s part, you get to sample a comet at a massive distance,” Samuel Grant, a postgraduate student at University College London, said in an ESA statement. “That’s pretty exciting.”

Related: Amazing photos of Comet Leonard in the night sky

The spacecraft gathered cometary data “for several days” surrounding Dec. 17, according to the statement. At the time, Comet Leonard was moving away from Earth toward the sun, which it approached most closely on Jan. 3.

Meanwhile, Solar Orbiter had completed an Earth flyby on Nov. 27 and was also headed out to the sun, which it will fly past in March. Although the nucleus of the comet was near Venus and about 27.7 million miles (44.5 million kilometers) away from the spacecraft in mid-December, the comet’s tail stretched past Earth’s orbit, according to ESA.

Grant realized in advance that Solar Orbiter would fly through the comet’s tail thanks to a computer program that incorporates spacecraft trajectories, comet orbits and the solar wind — the constant stream of charged particles that flows out from the sun and across the solar system, shaping the ion tails of comets.

The program was developed by scientists behind ESA’s Comet Interceptor mission, which will launch in 2029 and execute a flyby of a long-period comet. Although Solar Orbiter was designed to study the sun rather than comets, the spacecraft does carry some instruments that were able to gather data about Comet Leonard’s tail during the crossing.

For example, the spacecraft’s Solar Wind Analyzer instrument suite detected ions and compounds that belong to the comet rather than the solar wind, including oxygen ions and carbon dioxide. In addition, the probe’s magnetometer picked up signs of magnetic perturbations that may have been caused by the comet’s interaction with the sun’s magnetic field.

And, of course, Solar Orbiter snapped some photos as well. In particular, the spacecraft gathered ultraviolet images that could help scientists study water in the comet and visible-light images that could offer more details about the comet’s dust activity.

Although Solar Orbiter is the only mission that directly crossed through Comet Leonard’s tail, plenty of other spacecraft in the inner solar system were able to study the comet during its visit, including NASA’s STEREO-A and Parker Solar Probe spacecraft and the joint NASA/ESA SOHO mission.

The encounter marked Solar Orbiter’s second crossing of a comet’s tail; the spacecraft also passed through the tail of Comet ATLAS in 2020, shortly after launching.

“This kind of additional science is always an exciting part of a space mission,” Daniel Müller, ESA project scientist for Solar Orbiter, said in the statement.

“When the Comet ATLAS crossing was predicted, we were still calibrating the spacecraft and its instruments,” Müller said. “Also, the comet fragmented just before we got there. But with Comet Leonard we were totally ready — and the comet didn’t fall apart.”