Beyond the Solar System, out there in the wider galaxy, a very strange subset of exoplanets exists. Called hot Jupiters, these are majorly clingy – hugging so close to their host stars, they’re not just intensely hot, but also likely warped by gravitational forces.

Now, for the first time, astronomers have actually detected the warped shape of one of these hot Jupiters. Unlike ordinary, spherical planets we’re all used to, this one is pulled out of shape into what looks more like a rugby ball.

This achievement, courtesy of the CHEOPS space telescope, could help us to understand how these exoplanets come to exist in such extreme orbits.

“This is the first time such analysis has been made, and we can hope that observing over a longer time interval will strengthen this observation and lead to better knowledge of the planet’s internal structure.” The exoplanet is called WASP-103b, orbiting a star called WASP-103 some 1,800 light-years away. It’s pretty much a textbook hot Jupiter. As the name suggests, these exoplanets are gas giants like Jupiter; unlike Jupiter, however, they orbit very closely to their host stars, with orbital periods of less than 10 days. This is what makes them hot.

According to current models of planet formation, technically hot Jupiters shouldn’t exist. A gas giant can’t form that close to their star, because the gravity, radiation, and intense stellar winds ought to keep the gas from clumping together.

However, they do exist; of the nearly 5,000 confirmed exoplanets discovered to date, over 300 could be hot Jupiters. It’s thought that they form farther out in their planetary systems, then migrate inwards towards the star. However they do form, they can tell us a lot about the gravitational, or tidal, interactions between a planet and a star, so they’re very interesting to study.

WASP-103b was first detected in 2015, and it ticks the boxes nicely. It’s around 1.5 times the mass and twice the size of Jupiter, orbiting its star so closely that it goes around roughly once a day. This means that it’s incredibly hot, around 20 times hotter than Jupiter.

Although it’s relatively large, we can’t measure WASP-103b directly. Light from its home star vastly outshines it. However, we can measure its transits. This is when the exoplanet passes between us and the star, causing minute changes in the starlight; a faint dip when the exoplanet passes in front of the star, and a much fainter one when it passes behind, called a light curve. 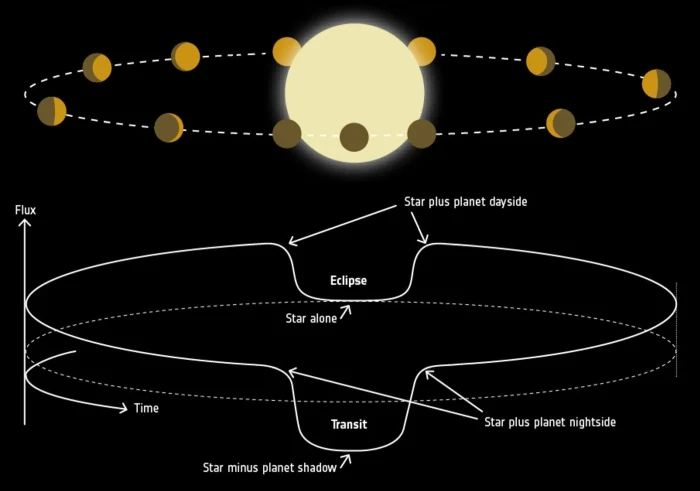 The European Space Agency’s CHEOPS is designed to detect these light curves, with high precision. It obtained multiple transits for WASP-103; these data allowed astronomers to calculate how the exoplanet’s mass is distributed internally, and obtain a set of parameters known as Love numbers.

In turn, this offers clues as to the exoplanet’s composition. That’s because the resistance of a material to deformation depends on what it’s made of, explain the researchers.

For example, Earth’s oceans change in response to the tidal pull of the Moon, but the continents don’t, at least not nearly as much. So the deformation of a planet can reveal what it’s made of – whether that’s a solid, liquid, or gas.

According to their analysis, WASP-103b isn’t just roughly Jupiter-sized, it has a similar composition and structure. Perhaps, however, it’s a bit more tenuous. Although its mass is 1.5 times that of Jupiter, its size is around twice. This suggests that the exoplanet is being inflated, likely by the heat of the star.

“If we can confirm the details of its internal structure with future observations maybe we could better understand what makes it so inflated. Knowing the size of the core of this exoplanet will also be important to better understand how it formed,” explains Susana Barros of the Institute of Astrophysics and Space Sciences and University of Porto in Portugal.

More observations will help astronomers to figure this out, and perhaps solve another mystery along the way. Most hot Jupiters have orbital periods that are growing shorter as they spiral in closer to their stars. WASP-103b’s orbital period seems to be growing longer, according to the CHEOPS observations.

It’s impossible to say what might be causing this. Another body could be disrupting the orbit, or the orbit could be eccentric, which causes irregularities.

It’s also possible that the measurements are slightly off, or have not been correctly understood, and that the orbit is actually decreasing. Studying the star and its strange exoplanet further could help resolve this conundrum.

“Future observations with the James Webb Space Telescope can help to better constrain the Love number of WASP-103b and gain an unprecedented view of the interior of this hot Jupiter,” the researchers write.

“This could help us to better understand these extreme systems.”

The research has been published in Astronomy & Astrophysics.