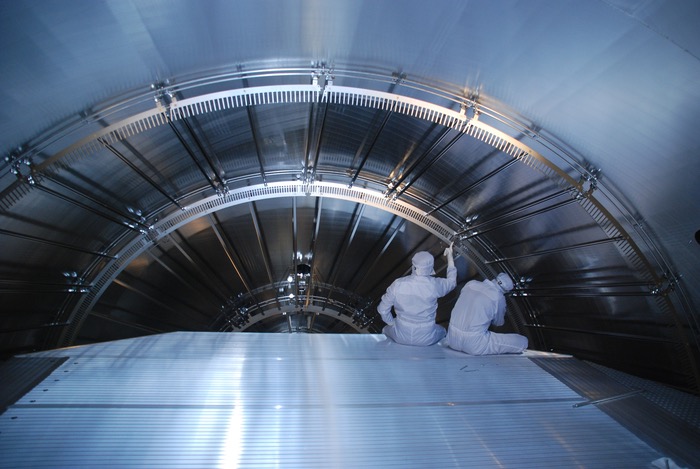 Every second, about 100 trillion neutrinos pass through your body. These ghostly particles are fundamental to our understanding of the universe. But they’re extremely small — so small that scientists once thought they had no mass at all.

Neutrinos do indeed have mass, however, and physicists have now managed to put a new upper limit on it: 0.8 electronvolts, or eV. (Electronvolts are technically a measure of energy, but mass and energy are equivalent, as shown by Albert Einstein’s most famous equation, E=mc^2.)

This is a very tiny number indeed. For perspective, the mass of an electron is about 511,000 eV. And protons and neutrons tip the subatomic scales at over 938 million eV.

To find the 0.8 eV limit, the researchers turned to tritium, an isotope of hydrogen that has two neutrons in its nucleus. Tritium is unstable and radioactive, meaning that it decays into lighter forms of hydrogen. As it does so, it releases a number of particles. By watching those particles, the scientists found traces of the neutrino mass and pieced it together.

They did so in KATRIN, a 230-foot-long (70 meters) experiment located at the Karlsruhe Institute of Technology in Germany. (KATRIN is an acronym for “Karlsruhe Tritium Neutrino Experiment.”) After watching tritium atoms decay and collecting data at KATRIN, the international team found the neutrino mass upper limit to be 0.8 eV — a result they reported online Monday (Feb. 14) in the journal Nature Physics.

“The particle physics community is excited that the 1-eV-barrier has been broken by KATRIN,” team member John Wilkerson, a particle physicist at the University of North Carolina, said in a press release.

Getting under the 1 eV line is a major milestone. For one, that’s where theories predict neutrino masses should lie. For another, a lot of exciting particle physics takes place at masses under 1 eV, so probing this realm could help unlock the workings of the universe at the tiniest scales, scientists say.