A deposit of hundreds of embalming tools uncovered in Abusir, Egypt – probably the largest ever found – offers clues into a lavish funeral that likely took place about 2,600 years ago.

The deposit of at least 370 ceramic jars – some of which carried heads to represent sacred animal deities – could provide unprecedented insight into the mummification process, experts told Insider.

“This is a really exciting and important discovery,” Wojciech Ejsmond, an Egyptologist from the Warsaw Mummy Project who was not involved in the study, told Insider in an email.

“We know hundreds of mummies but our knowledge regarding the embalming process still has many gaps.” 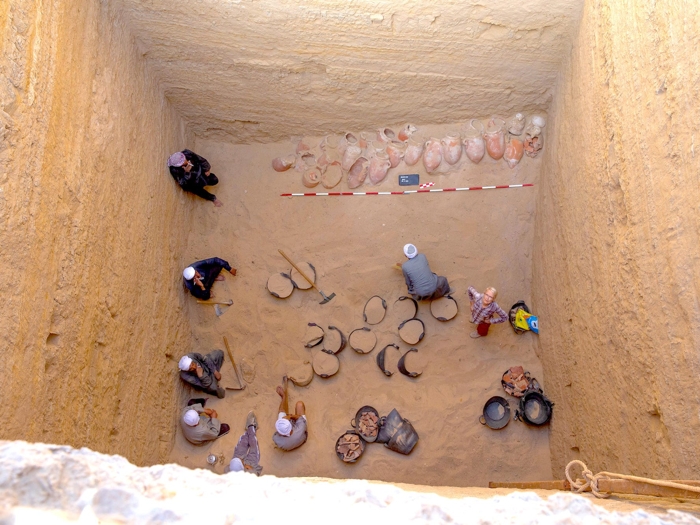 The embalming site, seen from the surface. (Czech Institute of Egyptology/Peter Košárek)

Embalming shafts or caches were commonly used in Ancient Egypt, said Miroslav Bárta, lead archaeologist on the mission and a professor of archaeology at Charles University in Prague.

He told Insider they were used to store any tool, container, or object that came into contact with the body during the 70 day-long embalming process.

The shafts of Abusir, a cemetery for ancient Egyptian elites from the neighboring city of Memphis, have been particularly rich in artifacts.

Such rich caches “can be called a ‘cookbook’ for making mummies,” Ejsmond said.

Another Abusir embalming shaft, of the tomb of Menekhibnekau, a high-ranking general, contained about 300 jars.

By comparison, the embalming cache of King Tutankhamun, a Pharaoh from the height of Egypt’s ancient prosperity,  only contained about a dozen, Ejsmond said.

A jar found at the Abusir site. (Czech Institute of Egyptology/Peter Košárek)

Menekhibnekau’s embalming shaft “provided fascinating details, especially since there is no ancient text detailing the mummification process,” he said.

“The current discovery made by the Czech mission has great potential. As Prof. Barta said, it can elucidate the sequence of events in the embalming process.”

The newly uncovered embalming shaft is about 16 ft wide and 50 ft deep. That is unusually large, per Bárta.

A tomb adjoining the shaft is also vast, about 45 ft wide and more than 65 ft deep.

This tomb has yet to be excavated and not much is known about the person buried there.

But because of where the tomb is and the lavishness of the embalming shaft, it is probably the resting place of one of the highest dignitaries of his time, around the 6th century BC.

He was perhaps a male priest, general, or official close to the pharaoh, Bárta said.

The name “Wahibre-mery-Neith”, which translates to “king beloved by the goddess Neith”, was found on one of the jars, and it is “highly probable” that this was his name, said Ladislav Bareš, an archaeologist on the dig and professor of Egyptology, also from the Charles University.

This display of wealth and over-the-top devotion seen in Abusir might have to do with the tense political situation at the time in Egypt, per Bárta.

“This particular cemetery of shafts in Abusir is a wonderful example of a collapsing society that is desperate for finding new means to prevent their collapse,” he said.

At around the 6th century BC, Egypt civilization was in decline. Nearby Greeks, Persians, and Nubians were looking to take over, threatening the Egyptian way of life.

This coincided with a revival of ancient sacred rites, including the recreation of elaborate historic funerals and the return to worshipping many kinds of different sacred animals, Bárta said.

“The ancient Egyptians were doing what every culture does when it’s under attack from the outside: they reach back to their roots,” Bárta said.

“Which of course is highly interesting anthropological behavior but in most cases fails, and it also failed in case of ancient Egyptians.”