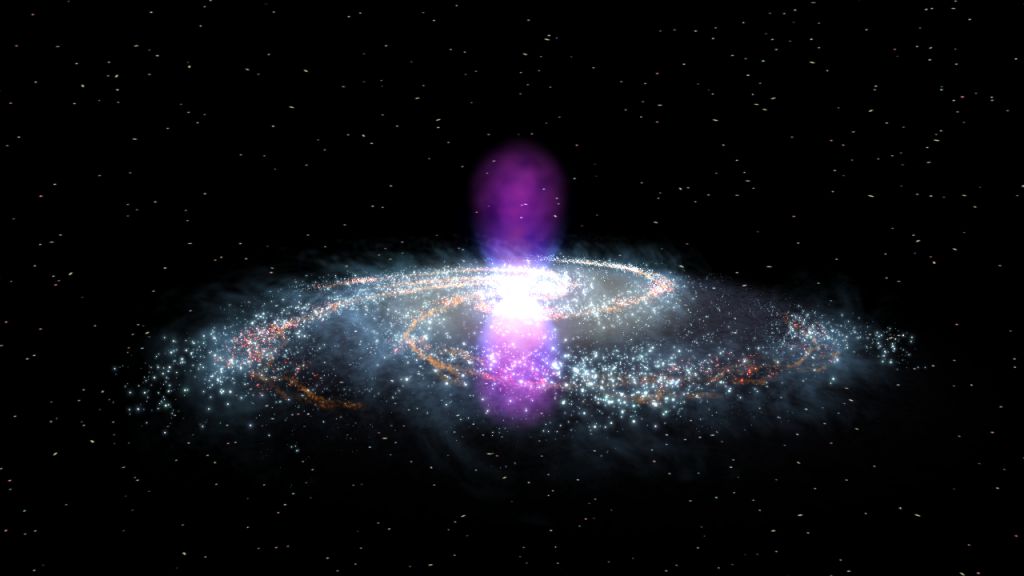 Two giant bubbles of gamma rays and X-rays that erupted from the center of the Milky Way may stem from a supermassive black hole‘s feeding frenzy at the heart of the galaxy, a new study finds.

Recently, the X-ray telescope eROSITA onboard the Spektr-RG space observatory discovered a pair of gigantic X-ray-emitting bubbles, each about 36,000 light-years tall and 45,600 light-years wide, that exploded above and below the heart of the galaxy. These blobs are remarkably similar to huge gamma-ray-emitting bubbles that NASA’s Fermi Gamma-ray Space Telescope first detected in 2010, as well as counterparts detected using both microwave and radio telescopes.

These findings may shed light on how this enormous black hole has grown over time and shaped the history of the Milky Way, and how other supermassive black holes may have influenced their galaxies as well, the researchers told Space.com.

Related: 8 ways we know that black holes really do exist

According to previous research, the similarities in the sizes and shapes of these cosmic bubbles suggests that they all arose from one cataclysmic event from the Milky Way’s galactic core. However, it has remained uncertain which of several possible triggers for this outburst could explain all these effects.

“Their origin has been intensely debated,” study lead author Hsiang-Yi Karen Yang, an astrophysicist at National Tsing Hua University in Taiwan, told Space.com. “Many theories have been proposed, but few can really fit all the multi-wavelength observational data.”

Now, with new data from eROSITA, researchers suggest a possible single cause for all these bubbles: incredibly powerful jets from Sgr A*, the supermassive black hole at the center of the Milky Way, which blasted outward about 2.6 million years ago.

Normally black holes are as dark as their name suggests, as their gravitational fields are so powerful that not even light can escape. However, previous research has found that when black holes gorge on materials from their surroundings, their magnetic fields and powerful spins can create pairs of high-energy jets of matter spewing out in opposite directions at relativistic speeds — that is, a significant fraction of the speed of light — Yang explained.

Computer models the scientists developed helped them to deduce key details about these jets. They estimated that all in all, they spewed out a whopping 3.16 * 10^44 ergs per second. (For reference, an erg is a unit of energy. 10^44 ergs per second is about 25 billion times the brightness of the sun, or about 10 times the brightness of the Milky Way.)

“I am very excited that the black-hole-jet model we proposed, despite its simplicity, is able to fit the gamma-ray, X-ray and microwave data so well,” Yang said.

The team’s computer simulations suggested that these jets lasted for about 100,000 years, blazing out at about 2.5% of the speed of light, or about 16.7 million miles per hour (27 million kilometers per hour). The researchers estimate that the Milky Way’s supermassive central black hole “had a very good appetite,” gobbling up about 1,000 to 10,000 times the mass of the sun during this time, Yang said.

Although Sgr A* is largely inactive at the moment, “the existence of the Fermi and eROSITA bubbles suggests that it was much more active before,” Yang said. “Pinning down activities like this would give us valuable information about how the supermassive black hole and our galaxy have grown to their current sizes.”

Future research can ask “are there Fermi-bubble-like structures in other galaxies too?” Yang noted. These new details about the bubbles in the Milky Way can help researchers “estimate how frequently similar events may occur in other galaxies, whether they would be observable given the sensitivity limits of the current telescopes, and so on. Then we could start to make sense of how this one event fits within our current understanding of galaxy formation and supermassive-black-hole growth in general.”

The scientists detailed their findings March 7 in the journal Nature Astronomy.