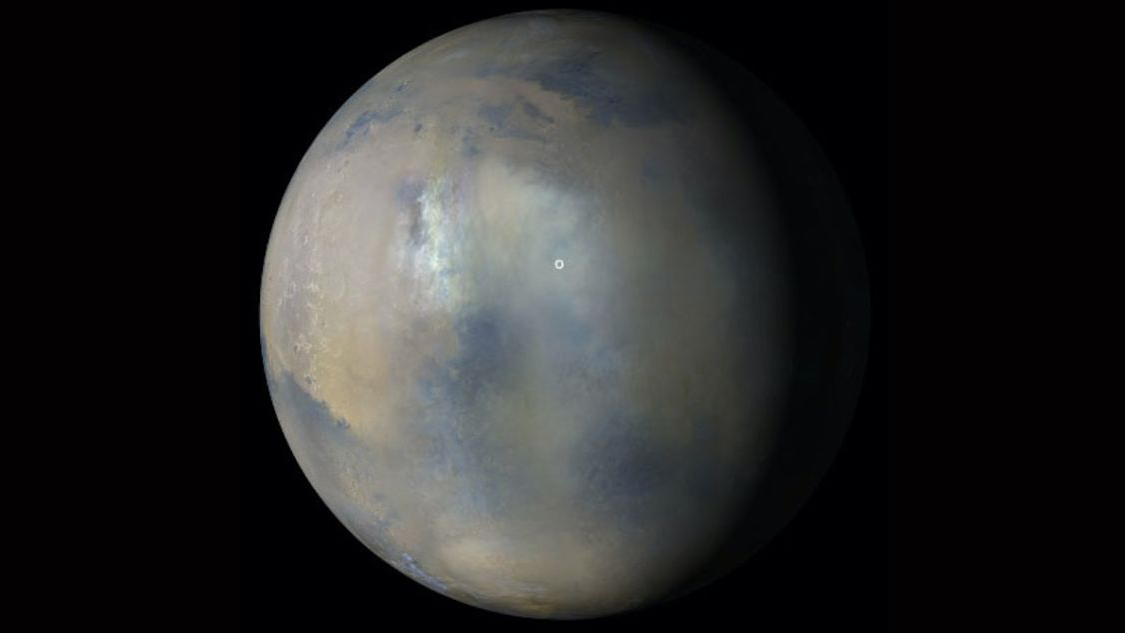 NASA’s Ingenuity Mars helicopter has notched yet another milestone — the first weather-related flight delay on another planet.

Ingenuity was scheduled to make its 19th Red Planet hop on Jan. 5. On New Year’s Day, however, a strong dust storm kicked up near Jezero Crater, which the helicopter and its robotic partner, NASA’s life-hunting Perseverance rover, have been exploring since February 2021.

This was not great news for the helicopter team.

“Atmospheric dust will decrease the amount of sunlight that reaches Ingenuity’s solar panels, which charge the batteries needed for flight,” Jonathan Bapst and Michael Mischna, of Ingenuity’s weather/environment team, wrote in an update Wednesday (Jan. 19).

“Furthermore, dust in the atmosphere is heated by sunlight and warms the surrounding atmosphere, resulting in a reduction of the already-low-density air in which Ingenuity must fly,” added Bapst and Mischna, both of whom are based at NASA’s Jet Propulsion Laboratory in Southern California.

The Ingenuity team decided to stand down from the Jan. 5 attempt and wait for the dust storm to dissipate or pass. This was a landmark decision, making Ingenuity the first aircraft ever to have a flight delayed by inclement weather on another planet. It also turned out to be the right one, Bapst and Mischna said.

“In the days following the flight delay, the dust storm moved over Jezero Crater, and we were able to clearly see its effects in both MEDA data and from orbit,” the duo wrote. (MEDA is the Mars Environmental Dynamics Analyzer, the weather station aboard Perseverance. The orbital data came courtesy of NASA’s Mars Reconnaissance Orbiter.)

“Most notable was a sharp drop in air density — about a 7% deviation below what was observed pre-dust storm,” Bapst and Mischna added. “This observed decrease would have put density below the lower threshold of safe flight and would have imparted undue risk to the spacecraft. We also observed the effect of dust in the amount of sunlight absorbed by Ingenuity’s solar array, which fell well below normal ‘clear sky’ levels, a drop of about 18%.”

The dust storm has died out, and Flight 19 is now targeted for no earlier than Sunday (Jan. 23), Bapst and Mischna said. The 100-second sortie will take Ingenuity out of Jezero’s rugged South Séítah basin, over a ridge and onto a plateau, mission team members have said.

Big, powerful dust storms are a regular occurrence on Mars. A few years ago, for example, a planet-encircling maelstrom killed off NASA’s venerable Opportunity rover. And more dust delays could be coming in the near future for Ingenuity. Autumn is approaching in Jezero Crater, which lies about 18 degrees north of the Red Planet’s equator — and autumn through winter is known as the “dusty season” on Mars, Bapst and Mischna said.

“Future events later in the dusty season are expected and have the potential to grow into global-scale storms like those observed most recently in 2018, 2007, and 2001,” they wrote in Wednesday’s update. “We will remain diligent in our efforts to safely fly Ingenuity for the foreseeable future.”