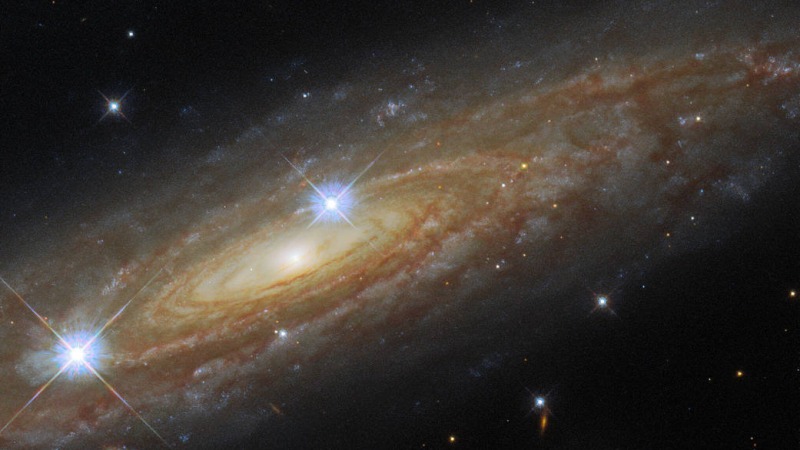 A new Hubble Space Telescope image of a spiral galaxy shows sparkling stars, including a couple that snuck into the foreground.

The telescope captured UGC 11537, a galaxy 230 million light-years away in the constellation Aquila; the galaxy sits at almost 10 times the distance to the spectacular Andromeda Galaxy (M31) that is just barely visible by the naked eye in Earth’s sky.

Because UGC 11537 is close to the plane of the Milky Way where most of our galaxy’s stars reside, two starry interlopers closer to home snuck into the image, the European Space Agency stated in late November.

“The spikes surrounding these stars are imaging artifacts, called diffraction spikes. They are the result of starlight interacting with the structure that supports Hubble’s secondary mirror,” ESA added in its description.

Hubble’s image came courtesy of data from its Wide Field Camera 3. On Oct. 26, a synchronization error sidelined the camera and other Hubble instruments and put the 31-year-old observatory into safe mode. Engineers adapted the observatory’s schedule and carefully put each instrument back online, completing the process on Monday (Dec. 6).

A successor telescope to Hubble, called the James Webb Space Telescope, is expected to fly to space on Dec. 22 after years of technical and funding delays. Since Hubble is expected to keep operating well into the 2020s, the two observatories will work together on at least some investigations in the coming years, according to NASA.