Authorities lifted a tsunami advisory and electricity was restored after a powerful 7.4-magnitude quake jolted northeastern Japan on Wednesday night in waters near the site of the Fukushima nuclear disaster.

At least one person died in the coastal city of Soma and dozens more were injured in the quake, local news agency Kyodo reported, as authorities said emergency departments in affected areas received numerous calls to respond to emergencies.

A tsunami advisory had warned of waves of up to one meter (three feet) for the Fukushima and Miyagi regions, but it was lifted hours later, with the Japan Meteorological Agency (JMA) saying waves of 30 centimeters (less than a foot) had been measured in the city of Ishinomaki in Miyagi.

The undersea quake, which caused temporary power cuts to more than two million households, hit at 11:36 pm (1436 GMT) off Fukushima at a depth of 60 kilometers (37 miles), the JMA said, originally reporting a magnitude of 7.3.

It came just days after Japan marked the 11th anniversary of a massive quake that triggered a deadly tsunami and the Fukushima nuclear catastrophe.

Images showed usually bright cityscapes plunged into darkness, while video footage on social media showed a train in the capital Tokyo rocking violently and rattling gaming machines at an arcade in Fukushima.

Authorities said they were working to assess damage from the quake, as officials warned of potentially powerful aftershocks. 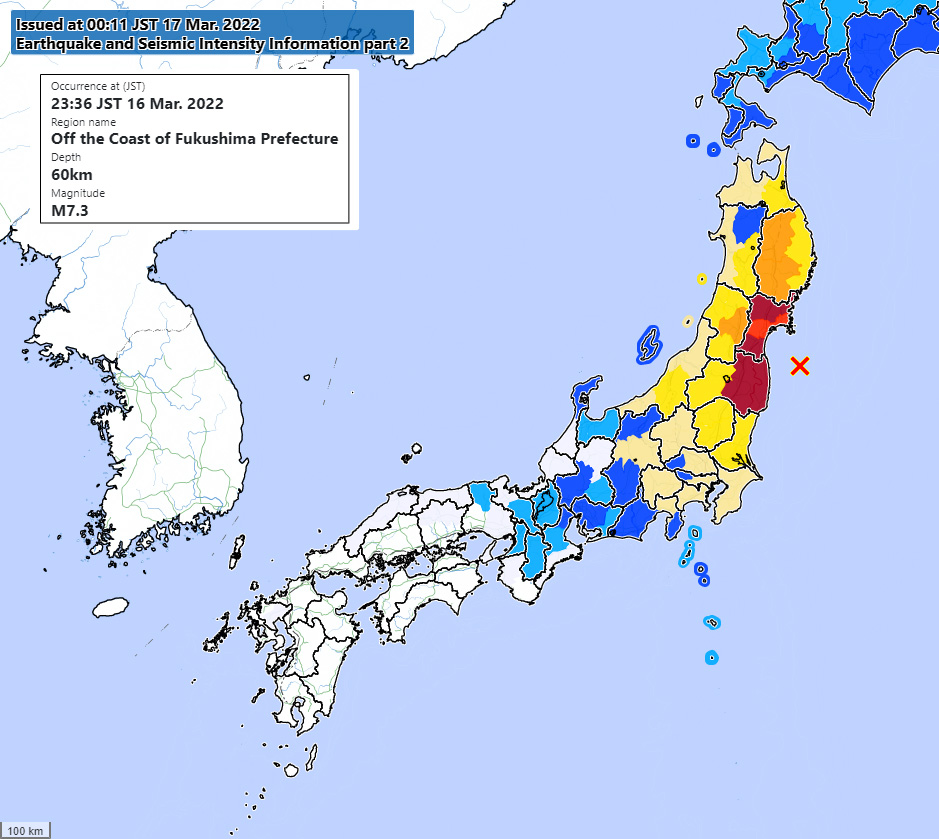 “Calls have been inundating police and ambulances in Fukushima and Miyagi,” government spokesman Hirokazu Matsuno told reporters. “We’re doing our best to assess the extent of the damage.”

“Major aftershocks often happen a couple of days after the first quake, so please stay away from any collapsed buildings… and other high-risk places.”

Japan’s nuclear authority said no abnormalities were detected at the Fukushima plant that went into meltdown in 2011 when the tsunami hit.

Pumps for cooling pools storing spent fuel at separate plants in Fukushima and Onagawa, in Miyagi, temporarily stopped operating at some reactors but were being quickly restored, the country’s nuclear watchdog said.

TV footage showed some structural damage in the northeast, including the collapse of a stone wall of Aoba castle in Sendai city.

A Shinkansen bullet train derailed north of Fukushima city, train company JR East said, but there were no immediate reports of injuries.

An official in the emergency department of the local government of Ishinomaki told AFP he had been woken by “extremely violent shaking”.

“I heard the ground rumbling. Rather than feeling scared, I immediately remembered the Great East Japan Earthquake,” he said, referring to the 2011 disaster.

Multiple smaller jolts hit the region in the hours immediately after the quake.

Take action to protect yourself

More than two million households were left without power in the eastern Kanto region, including 700,000 in Tokyo, electricity provider TEPCO said.

But the power company had resolved blackouts in its service area by around 4:00 am (1900 GMT), Kyodo reported.

Evacuation orders were issued in some northeastern towns, NHK reported, with Rifu town in Miyagi opening shelters in its official buildings.

“Please pay attention to information on the earthquake, stay away from the coast and take action to protect yourself,” he said.

Japan sits on the Pacific “Ring of Fire”, an arc of intense seismic activity that stretches through Southeast Asia and across the Pacific basin.

The country is regularly hit by quakes, and has strict construction regulations intended to ensure buildings can withstand strong tremors, but it remains haunted by the memory of the 2011 catastrophe.

A minute’s silence was held last Friday, the anniversary of the disaster, to remember the some 18,500 people left dead or missing, most in the tsunami.

Around the stricken Fukushima plant, extensive decontamination has been carried out, and this year five former residents of Futaba, the region’s last uninhabited town, returned to live there on a trial basis.

Around 12 percent of Fukushima was once declared unsafe, but no-go zones now cover just 2.4 percent of the prefecture, although populations in many towns remain far lower than before.