People in the Chincha valley of Peru threaded the spines of the dead onto wooden rods around 500 years ago, a mostly-unknown practice only recently documented by archaeologists.

It may have been an attempt to restore the bodies of the dead during the European colonization, according to a study by the researchers who unearthed 192 examples of such spines. They include the remains of children.

“Our findings suggest that vertebrae-on-posts represent a direct, ritualized, and Indigenous response to European colonialism,” Jacob L. Bongers, lead author of the study and archaeologist from the University of East Anglia, UK, told Insider.

“We’re seeing a mortuary behavior in a time of crisis,” he said.

The study authors carried out a systematic survey of some 600 mausoleums, called chullpas, in the Chincha Valley. They included pillaged tombs, which are often overlooked by archeologists, Bongers told Insider.

The survey revealed 192 examples of these “vertebrae-on-posts”, per the study.

“There’s a sense of care. We have adults and we have juveniles. We have vertebrae from children that are strung on these posts,” he said.

A carbon dating of the reeds used to string the spines together puts the practices in a relatively narrow period of time, around 1450 to 1650 CE, which spans the end of Inca rule and the start of European colonization.

That period was rife with political uncertainty for the Chincha valley, a sliver of greenery surrounded by a punishing desert on the coast of the Pacific.

The Chincha Kingdom, which ruled the area from 1000 to 1400 CE, was made up of a network of communities of specialists, including farmers, fishers, and merchants. In about 1500 CE, it was incorporated into the growing Inca empire, per the paper. 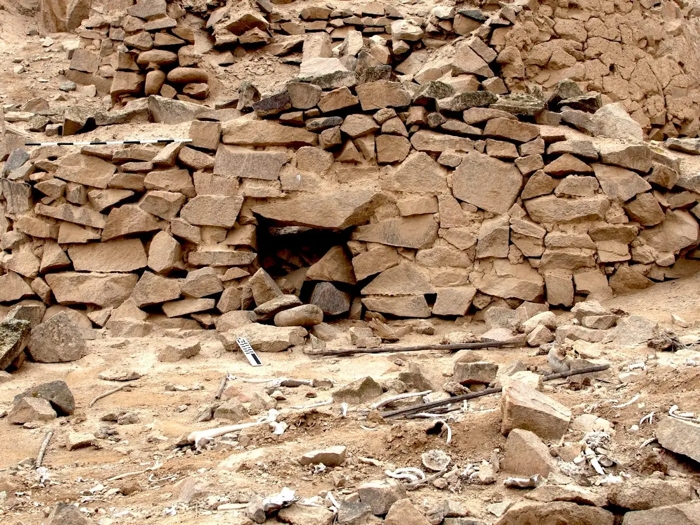 A example of an elaborate built grave called a ‘chullpa’. (JL Bongers)

At that point, the Chincha Kingdom was prosperous, collecting gold and silver items through trade from other areas of the country. Then Europeans arrived in the 16th century.

“The dates coincide with this incredibly turbulent period of famine and epidemics, and of course, the Europeans coming in and trying to install a new social order. This behavior is happening in that context,” said Bongers.

Within the space of fifty years, alongside the end of the Inca rule in the region, the Chincha population dropped sharply, from 30,000 households in 1533 to 979 in 1583, per a press release accompanying the study.

“All of that data supports the model that these vertebrae on posts were efforts to perhaps reconstruct the dead in response to European looting,” he said.

There is still some uncertainty about why they were threaded on the posts.

Part of the culture of Andean people at the time was to keep revisiting the bodies. The chullpas were open so that family members could visit the remains. These were taken out of the graves, painted, wrapped in textiles, and sometimes displayed. Body parts were commonly removed for offerings or trophies.

Some have suggested that the spines were used as rattles or trophies, Bongers said.

But for Bongers, the findings provide some unique insight into how conflict can change people.

“The fact that there’s 192 of these, that’s is quite a lot. It speaks to this being a shared, coordinated, response to European colonization,” said Bongers.