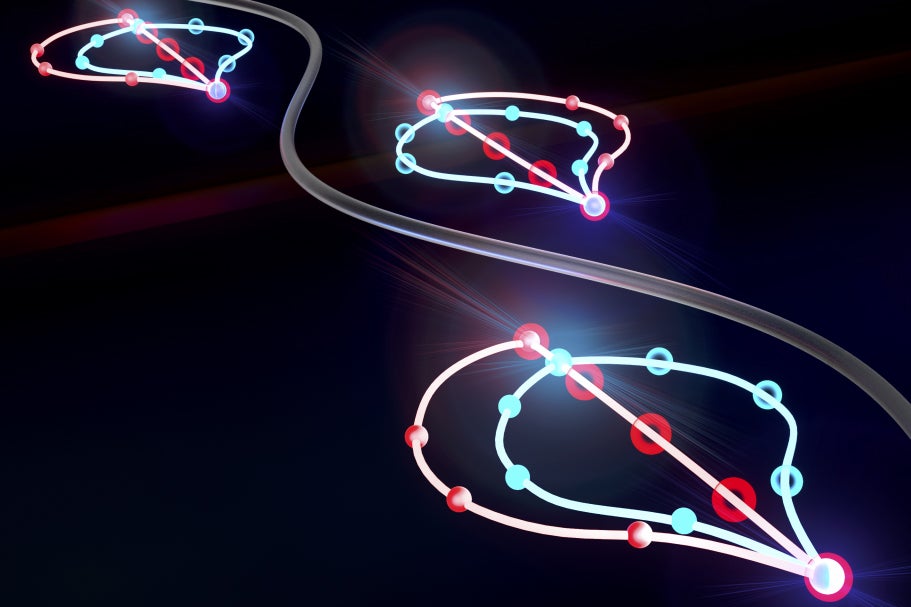 The wave function—an abstract concept used to predict the behavior of quantum particles—is the bedrock on which physicists have built their understanding of quantum mechanics. But this bedrock itself is not something physicists have a perfect grasp of, literally or philosophically. A wave function is not something one can hold in their hand or put under a microscope. And confusingly, some of its properties simply seem not to be real. In fact, mathematicians would openly label them as imaginary: so-called imaginary numbers—which arise from seemingly nonsensical feats such as taking the square roots of negative integers—are an important ingredient of a wave function’s well-proved power to forecast the results of real-world experiments. In short, if a wave function can be said to “exist” at all, it does so at the hazy crossroads between metaphysical mathematics and physical reality.

Now researchers at the University of California, Santa Barbara, and their colleagues have made big strides in bridging these two realms: for the first time, they reconstructed a wave function from a measurement of how a semiconductor material responds to an ultrafast pulse of light. Appearing in Nature in November, the team’s work may help take electronics engineering and quantum materials design into a new era of fine-tuned understanding and precisely controlled innovation.

For real-world applications, such as modern electronics, the somewhat mysterious wave function is physicists’ best source of information about what actually happens inside of some new gadget. To predict how fast an electron moves inside a material or how much energy it can carry, they must start their calculations with the so-called Bloch wave function—named for physicist Felix Bloch, who devised it in 1929. This is especially important for engineering quantum devices, says Joe Costello, a physics student at U.C.S.B. and co-lead author of the recent study. “If you’re thinking about building any sort of device that takes advantage of quantum mechanics, you’re going to need to know its [wave function’s] parameters really well,” he emphasizes.

This includes the wave function’s so-called phase, a fully imaginary parameter that is nonetheless often crucial for designing quantum computers. “What has been characterized for a long time is the energies [of the electrons]. That’s the basis for all electronics,” says Mackillo Kira, a physicist at the University of Michigan, who read an earlier draft of the study but was not directly involved in the work. “But now, with quantum information technology, the next level is to go beyond that and eventually get these [wave function] phases.”

To make it to that next level, the team used two lasers and the semiconductor material gallium arsenide. Their experiment consisted of three steps: First, they hit the electrons inside the material with a pulse of near-infrared laser light. This gave those particles extra energy so they would start to quickly race through the semiconductor. When each negatively charged electron started its race, a so-called hole, something like its shadow particle—identical to the electron but positively charged—moved with it. Next, the researchers used another laser pulse to tear the hole and the electron apart, then quickly allowed them to reunite—a sort of quantum version of Peter Pan losing his shadow and having it reattached. When the hole and the electron recombined, the extra energy each accumulated while running solo was released as a burst of light.

Ten years ago a team of physicists led by Mark Sherwin of U.C.S.B. noticed something curious about these bursts: their properties were inexplicably sensitive to the properties of the laser pulses that started the particle run in the first place. Sherwin and his colleagues realized that there was significant and largely unexplored nuance to how a semiconductor’s electrons react to light. “This was unexpected,” he recalls. “But we decided to explore it further and started systematically looking at it.” In the new work, calculations done by postdoctoral scholar Qile Wu, a member of Sherwin’s team and co-lead author of the study, proved that this telltale sensitivity is more than a mere curiosity because it can be used to reconstruct the Bloch wave functions of holes in a semiconductor.

The connection between the absorbed laser light and the emitted flash revealed itself in measurements of a property called polarization, or the direction in which light waves oscillate as they travel. In the experiment, the polarization of laser light influenced the phases of the wave functions of the running electrons and of their shadowy partners, the holes. When the reunion of the two produced light at the end of the experiment, the polarization of that flash was determined by these two wave function phases. Because such phases are typically represented as imaginary rather than real numbers in physicists’ equations, relating them to the very real and measurable polarization of light was a breakthrough for Wu and his collaborators. Shambhu Ghimire, a physicist at Stanford University, who was not involved with the work, underscores exactly this feature of the new study: it used light to obtain information that was previously seen as purely mathematical. “These [light-based] methods can sometimes be difficult or really conceptually challenging, but most of the time, they provide access to this imaginary part of the complex number [wave function] that you do not have access to with other, conventional methods,” he says. Further, the team managed to reverse engineer whole Bloch wave functions from those same polarization measurements.

Ghimire further notes that the kind of laser light the U.C.S.B. researchers used is important beyond its polarization. They employed ultrafast laser pulses, hitting the electrons with light for as little as a trillionth of a second. Electrons in solids tend to bump into atoms instead of moving uninterrupted, so being able to control them with such celerity was crucial for the team to carry out its Peter-Pan-and-his-shadow manipulation of the electron and the hole. Otherwise, in any given run of the experiment, one or the other would likely slam into some atomic obstacle, preventing reunification. Seamus O’Hara, another co-lead author of the study and a Ph.D. student in Sherwin’s group, credits some of that technical advantage to the team’s use of U.C.S.B.’s state-of-the-art Free-Electron Lasers facility.

But the impact of the work will likely extend beyond specialized facilities and simple semiconductors. In gallium arsenide, Wu’s theoretical research showed, very few properties of the reemitted light have to be known for a mathematical reconstruction of Bloch wave functions. Other semiconductor materials may require more complete—and perhaps elusive—knowledge, however. “This work is fascinating as a very fundamental demonstration of something you can do where the answer is really well defined,” says Mette Gaarde, a physicist at Louisiana State University, who was also not part of the study. “But the implication is that you could potentially use this to learn something about more complex structures.”

The U.C.S.B. team is already making ambitious plans for next steps. Going forward, the researchers are interested in applying their technique to materials in which electrons strongly interact with one another or where laser light would excite particles more exotic than electrons and holes. “We’re looking for new materials. If people have semiconductors that they would like to have looked at, we’re excited to try,” Costello says, eager for more opportunities to glimpse the intangible world of wave functions many more times.