We can all let out a collective sigh of relief. With its primary mirror array fully unfolded, the major components of the beleaguered James Webb Space Telescope are now deployed, and it continues to calmly make its way to its destination.

The deployment, completed on 8 January 2022, marks a pretty important milestone for the joint NASA, ESA and CSA Webb mission, and space science in general. The 18-segment primary mirror is the largest mirror ever sent to space, and it’s set to revolutionize space science with an unprecedented view of the cosmos.

“NASA achieved another engineering milestone decades in the making. While the journey is not complete, I join the Webb team in breathing a little easier and imagining the future breakthroughs bound to inspire the world,” said NASA Administrator Bill Nelson.

“The James Webb Space Telescope is an unprecedented mission that is on the precipice of seeing the light from the first galaxies and discovering the mysteries of our Universe. Each feat already achieved and future accomplishment is a testament to the thousands of innovators who poured their life’s passion into this mission.”

Next to #UnfoldTheUniverse: traveling out to our orbital destination of Lagrange point 2! pic.twitter.com/mDfmlaszzV

Currently, Webb is sailing off to its new home, a spot some 1.5 million kilometers (just under 1 million miles) from Earth, in a region called a Lagrange point.

Here, the combined gravitational forces of two larger bodies (in this case Earth and the Sun) create a small area of gravitational stability.

Webb will sit in the second Lagrange point – there are five in total for a two-body system – on the far side of Earth from the Sun, also known as L2. Webb is expected to arrive at L2 by the end of January.

As it travels, scientists here on Earth will start issuing commands to get Webb ready for the science to come. Towards the end of Webb’s first month in space, engineers will initiate the mid-course correction that will make sure Webb reaches its new position in orbit around L2. 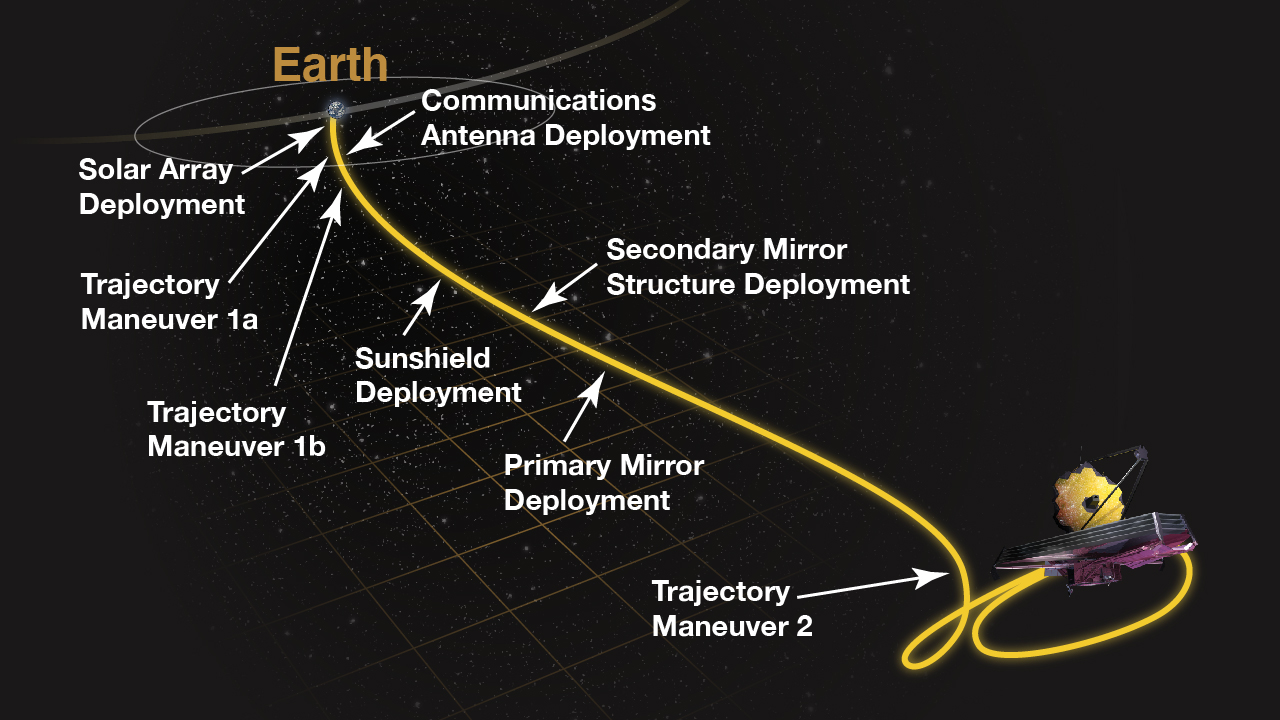 After Webb arrives at L2, the Fine Guidance Sensor, near-infrared camera and near-infrared spectrograph will be turned on, taking (blurry, because the mirrors will not have been focused) images of star fields to ensure they’re working.

Then, it will be time to fine-tune the mirror. This involves commanding 126 extremely precise actuators behind the gold-coated mirror to subtly flex and bend each segment in a process that will take several months.

After that, the calibration will commence, the team again taking great pains to make sure Webb is functioning as it ought. Finally, Webb should be ready to commence science operations sometime in June 2022.

My amazing daughter made me a #JWST blueberry-lemon pound cake to celebrate the full mirror deployment! ❤️ pic.twitter.com/yoqc3LqxuD

I’m ready to #UnfoldTheUniverse with my crocheted #JWST mirror! pic.twitter.com/tbPuREI5Dc

For now, given the difficulties that plagued the project since its inception in 1996, we can all take a moment to celebrate the tremendous achievement of getting the observatory successfully into space and fully deployed.

“The successful completion of all of the Webb Space Telescope’s deployments is historic,” said Webb program director Gregory Robinson of NASA.

“This is the first time a NASA-led mission has ever attempted to complete a complex sequence to unfold an observatory in space – a remarkable feat for our team, NASA, and the world.”