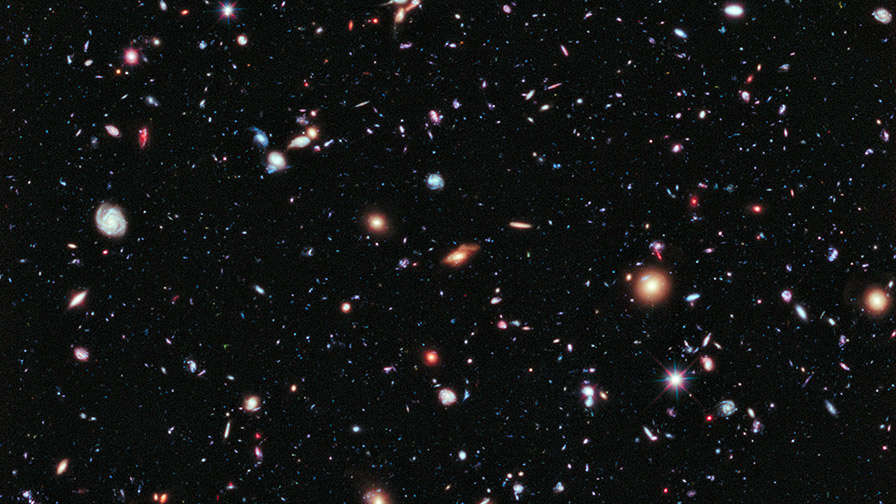 It’s one of the most compelling questions you could possibly ask, one that humanity has been asking since basically the beginning of time: What’s beyond the known limits? What’s past the edge of our maps? The ultimate version of this question is, what lies outside the boundary of the universe? The answer is … well, it’s complicated.

Even if the universe is a formless, shapeless, nameless void of absolutely nothing, that’s still a thing and is counted on the list of “all the things” — and, hence, is, by definition, a part of the universe.

If the universe is infinite in size, you don’t really need to worry about this conundrum. The universe, being all there is, is infinitely big and has no edge, so there’s no outside to even talk about.

Oh, sure, there’s an outside to our observable patch of the universe. The cosmos is only so old, and light only travels so fast. So, in the history of the universe, we haven’t received light from every single galaxy. The current width of the observable universe is about 90 billion light-years. And presumably, beyond that boundary, there’s a bunch of other random stars and galaxies.

But past that? It’s hard to tell.

The case of the curvature

Cosmologists aren’t sure if the universe is infinitely big or just extremely large. To measure the universe, astronomers instead look at its curvature. The geometric curve on large scales of the universe tells us about its overall shape. If the universe is perfectly geometrically flat, then it can be infinite. If it’s curved, like Earth’s surface, then it has finite volume.

Current observations and measurements of the curvature of the universe indicate that it is almost perfectly flat. You might think this means the universe is infinite. But it’s not that simple. Even in the case of a flat universe, the cosmos doesn’t have to be infinitely big. Take, for example, the surface of a cylinder. It is geometrically flat, because parallel lines drawn on the surface remain parallel (that’s one of the definitions of “flatness”), and yet it has a finite size. The same could be true of the universe: It could be completely flat yet closed in on itself.

But even if the universe is finite, it doesn’t necessarily mean there is an edge or an outside. It could be that our three-dimensional universe is embedded in some larger, multidimensional construct. That’s perfectly fine and is indeed a part of some exotic models of physics. But currently, we have no way of testing that, and it doesn’t really affect the day-to-day operations of the cosmos.

And I know this is extremely headache-inducing, but even if the universe has a finite volume, it doesn’t have to be embedde

A matter of perspective

When you imagine the universe, you might think of a giant ball that’s filled with stars, galaxies and all sorts of interesting astrophysical objects. You may imagine how it looks from the outside, like an astronaut views the globe of the Earth from a serene orbit above.

But the universe doesn’t need that outside perspective in order to exist. The universe simply is. It is entirely mathematically self-consistent to define a three-dimensional universe without requiring an outside to that universe. When you imagine the universe as a ball floating in the middle of nothing, you’re playing a mental trick on yourself that the mathematics does not require.

Granted, it sounds impossible for there to be a finite universe that has nothing outside it. And not even “nothing” in the sense of an empty void — completely and totally mathematically undefined. In fact, asking “What’s outside the universe?” is like asking “What sound does the color purple make?” It’s a nonsense question, because you’re trying to combine two unrelated concepts.

It could very well be that our universe does indeed have an “outside.” But again, this doesn”t have to be the case. There’s nothing in mathematics that describes the universe that demands an outside.

If all this sounds complicated and confusing, don’t worry. The entire point of developing sophisticated mathematics is to have tools that give us the ability to grapple with concepts beyond what we can imagine. And that’s one of the powers of modern cosmology: It allows us to study the unimaginable.

Learn more by listening to the episode “What’s outside the universe?” on the Ask a Spaceman podcast, available on iTunes and askaspaceman.com. Thanks to Mitchell L. for the questions that led to this piece! Ask your own question on Twitter using #AskASpaceman or by following Paul @PaulMattSutter and facebook.com/PaulMattSutter. Follow us on Twitter @Spacedotcom and on Facebook.