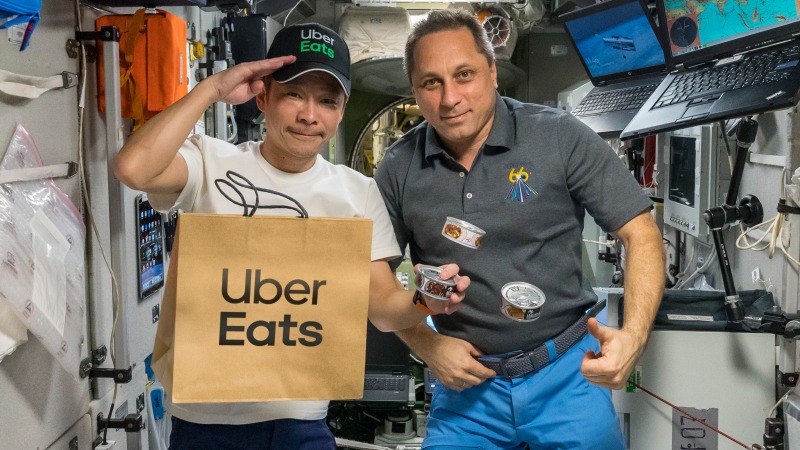 Yusaku Maezawa carried an Uber Eats bag filled with ready-to-eat canned Japanese dishes somewhere in the Soyuz spacecraft that he blasted off aboard to orbit last Wednesday (Dec. 8) for a 12-day mission aboard the International Space Station. And, like any generous crew member, Maezawa shared the bounty with his Expedition 66 crewmates.

“With dishes including boiled mackerel in miso, beef bowl cooked in sweet sauce and more, Uber Eats and Yusaku Maezawa treated the astronauts [and cosmonauts] to a delicious meal that was a welcome break from standard space food,” Uber Eats said in a statement.

The company is offering a deal to celebrate, giving $10 off of orders valued at $20 or more for the first 24,800 people who use a special promotional code (the code is SPACEFOOD) between Dec. 13-19. (This number is meant to celebrate the distance from the ground to the space station, but the calculation is unclear as the average distance is 250 miles (400 km).)

“We’re over the moon to have helped make the first successful delivery to space,” Dara Khosrowshahi, CEO of Uber, said in the same statement. “Our goal is to help people go anywhere and get anything, so we’re proud to serve the astronauts at the International Space Station. Yusaku Maezawa gets a thumbs up on this delivery, even though it took a bit longer than the usual 30 minutes to arrive.”

To be fair to Maezawa’s delivery time, he had a relatively swift six-hour trip to the space station that only took four orbits to achieve. But the Soyuz isn’t designed to keep heated food viable for that long, hence the canned cuisine.

There is no word yet on whether Maezawa and Uber Eats are working on another joint venture for his next planned space mission, which is a trip around the moon with SpaceX scheduled for 2023.