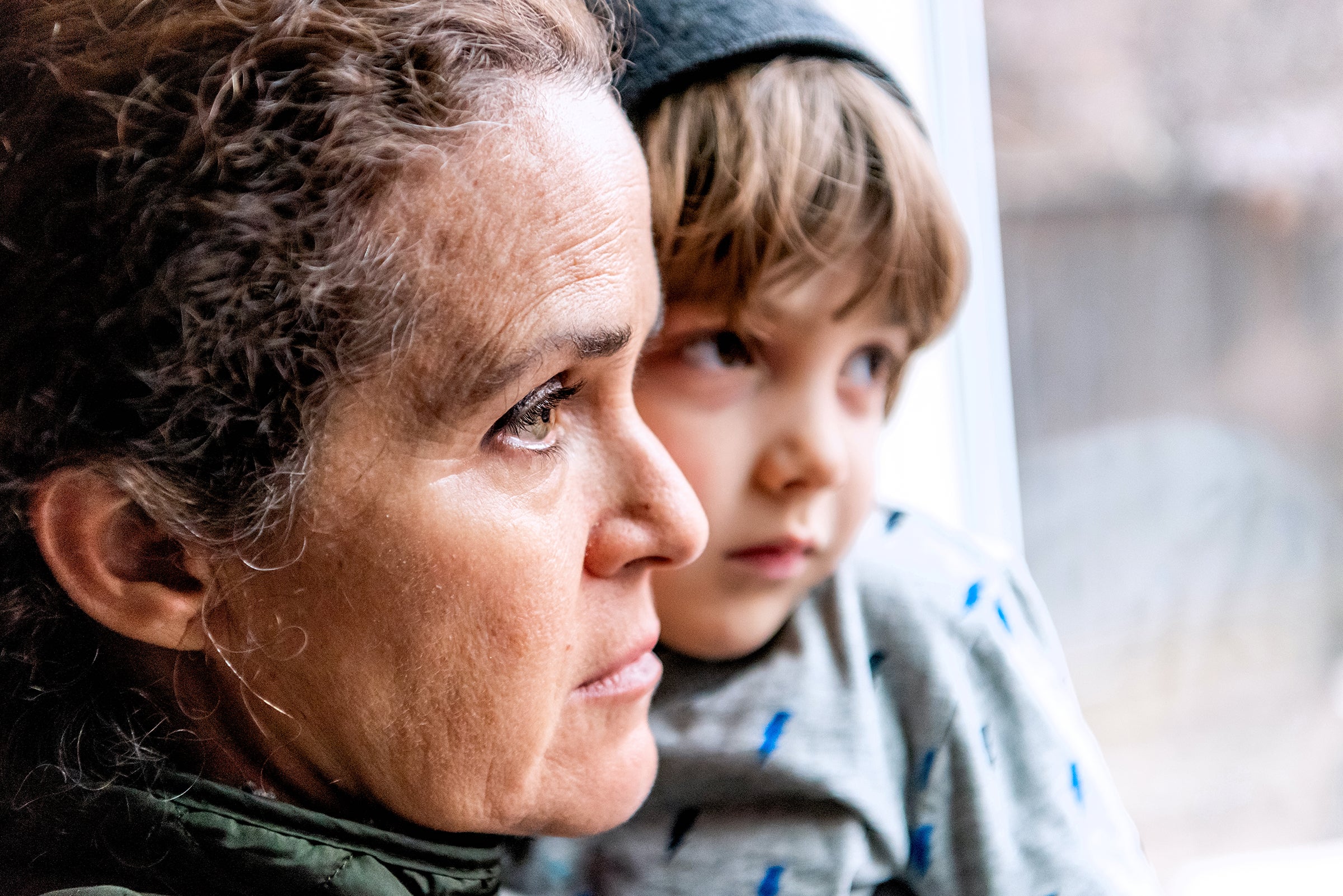 The list of U.S. parents’ pandemic burdens this winter is longer and more chaotic than ever: More kids have been infected with the novel coronavirus, or SARS-CoV-2, despite scrupulous safety measures. Outbreaks have occurred in staff-strained schools and daycare centers. Many have faced dreaded returns to remote learning. COVID vaccine boosters remain unauthorized for most children under age 12. Vaccines are not yet authorized for children under age five. At-home coronavirus tests are difficult, if not impossible, to come by. PCR test results from labs are often severely delayed.

The upshot is that many parents, already overburdened for the past 22 months, if not longer, feel as if their life is spiraling out of control. New survey results back this up. Parents in the U.S. are at least as stressed now as they were in March 2020, when coronavirus shutdowns first hit, according to preliminary data.

“Parents are just being hit on all sides, and, in many cases, can’t catch a break,” says University of Indiana Bloomington sociologist Jessica Calarco, who has collected information from parents about their experiences throughout the pandemic. “The conditions that we saw during the early stages of pandemic have only gotten worse,” Calarco adds, based on her comparison of survey data she collected in December 2020 with new data she started gathering in December 2021.

Seventy percent of mothers and 54 percent of fathers report feeling overwhelmed in the past two weeks, according to Calarco’s latest findings from an ongoing national online survey of more than 2,000 randomly sampled U.S. parents of children younger than 18 years old.

And the stress is likely driven by the Omicron wave, which last week disrupted approximately 6,300 U.S. schools, according to Burbio’s K-12 school opening tracker. And between December 30, 2021, and January 6, 2022, it resulted in more than 580,000 newly reported cases of COVID among children—a tripling of the numbers from two weeks prior to that period.

A key problem is that governments and schools are not responding to this wave at a level commensurate with the stress and fear parents are experiencing, Calarco says. There is a “huge mismatch” between the “business as usual” attitude of many policy makers, schools, and employers and parents’ fears and experiences, she explains. This gulf “contributes to the huge tension that so many parents are feeling right now.” Calarco has posted her results periodically on her Web site and on preprint servers, and she says she is preparing them for publication in peer-reviewed journals.

Robert Cotto, Jr., an education researcher and lecturer at Trinity College in Hartford, Conn., has also studied the effects of the pandemic on parents—and he agrees with Calarco. Key government responses have included distributing free tests and masks (often just a few per household and sometimes only if certain conditions are met) through local community centers or schools. But that is “a very low-level response,” Cotto says. Last week President Joe Biden announced that the federal government is procuring one billion at-home COVID tests (500 million more than initially announced in late December) that Americans can now request via a government-run Web site.

Many Americans who have desperately needed tests have not been able to get their hands on them—an especially big headache for parents, who often need negative results to send their kids back to school after holidays, coronavirus exposures, quarantines or any kind of illness. Natalie Gott, a mother of three who lives in Moon Township, Penn., says that when she developed COVID symptoms on December 29, 2021, her husband drove to the local Walmart, Walgreens and Rite Aid stores at 6:30 A.M. to look for a rapid at-home test. He returned empty-handed. When Gott looked online for PCR test appointments, she found none available until well into the following week. “I of course wanted to know if we needed to quarantine before school started again,” she says. Gott eventually found an urgent care clinic offering PCR tests and waited in line for two hours; the result came back positive. Her husband then drove 30 miles to Ohio to find rapid tests for rest of the family.

Lauren Faga, who lives in Needham, Mass., says she waited seven and a half hours in a car line with her four-year-old to get him a PCR test after he had been exposed to the coronavirus at preschool. When they finally got to the front of the line, she says, she was told the testing site had run out of tests—and was turned away.

School policies and COVID safety requirements make testing shortages especially challenging. Elaine Haber was on vacation with her family when she received an e-mail from her daughter’s elementary school in Los Angeles announcing that a negative PCR result for the coronavirus was required for students before returning to school the following week. She says she spent a week frantically hunting for a test appointment, eventually succeeding just hours before school was to resume.

Some families are coming up with creative ways to get COVID tests. “I just added the CVS weekly stock date to my calendar to get my family’s two-test limit first thing, before they run out,” says Brad M. Griffin, a father of three who lives in Pasadena, Calif. Local Facebook groups, created last winter to help people find vaccine appointments, have since evolved into test-hunting sites where people—many of them parents—share tips. One such group based in Pittsburgh has nearly 38,000 members and has had more than 400 posts over the past month.

“It is heartbreaking to hear that parents cannot access at-home testing for their children despite valiant efforts at sleuthing restocking times at drug stores and on online sites. Many parents I speak with feel like giving up, and this is just not okay,” says Hina Talib, a pediatrician at the Children’s Hospital at Montefiore in Bronx, N.Y.

Finding and buying tests requires resources. So the families who get tests are often those with more socioeconomic advantages, notes economist Gema Zamarro of the University of Arkansas. A December 2020 preprint study, which has not yet been peer-reviewed, probed this issue. It surveyed 316 Americans who were part of a randomized, representative sample recruited from Florida, Illinois, and Maryland, and who said they had needed a Covid-19 test within the past two weeks. Among those sampled, Black people were significantly less likely than others to be able to obtain a test, the study authors reported.

Those who do manage to get PCR tests sometimes wait a long time for results. Heather Osterman-Davis, a mother of two kids, says she took a PCR test on December 24, 2021, at a Labworq testing site in New York City, which had promised a speedy turnaround time. Osterman-Davis says her negative result came back two weeks later, rendering it all but useless. Reportedly, she is not alone: On December 22 New York State Attorney General Letitia James issued a warning to Labworq for having frequently delivered longer wait times than the 24 hours it then indicated. The company’s Web site now asserts a turnaround of two to five days. At press time, Labworq has not responded to Scientific American’s request for comment.

Testing is one of many task-level problems families face right now, but a long-simmering household atmosphere of anger and resentment can pervade the fabric of each day. Many families are routinely enduring intensified arguments and tension at home: Calarco’s ongoing survey finds that 42 percent of mothers and 35 percent of fathers say they have felt frustrated with their partners over the past two weeks. Half of all parents—and slightly more mothers than fathers—are reporting symptoms of anxiety and depression, while only 15 percent of moms and 25 percent of dads say they are getting enough sleep to feel rested.

“The preliminary data, so far, really highlight stark and troubling patterns when it comes to parents’ sleep patterns, parents’ mental health and parents’ relationships,” Calarco says. “The uncertainty and the intensity of the current pandemic conditions are taking a really serious toll on many parents and particularly on moms.”

Echoing that aspect of Calarco’s results, Zamarro’s research has shown that mothers have taken on a larger proportion of child care throughout the pandemic—and that this has been the case even in two-parent households in which both caregivers work. In research that has not yet been published, Zamarro and her colleagues found that, in the fall of 2020, 47 percent of working mothers said that they were primarily responsible for providing childcare and schoolwork help to their kids, while only 9 percent of working fathers said the same.

This unequal burden means mothers are often the ones most worried about what is to come; they are the parents expected to step in as primary caregiver if a child is sick, a testing requirement gets missed or school goes remote. “You’re thinking, ‘At any moment, we’ll need to figure this out,’” Zamarro says. “You send them to school, and you just say, ‘Well, for today, they go, and then we will see what happens.’ And you try to protect them as much as you can.”