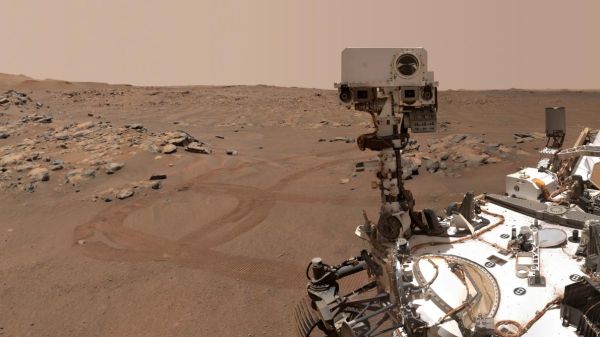 The mission, not quite at one Earth year on Mars, has topped a new distance record for Red Planet rovers. On Friday (Feb. 4) Perseverance made the longest drive completed in a single Martian day, or sol, traveling 806.3 feet (245.76 meters), the rover’s Twitter feed reported.

Previously that record was held by NASA’s Opportunity rover, which traversed 702 feet (214 meters) in a single day in 2015, according to NASA.

“After a few months exploring this area, I’m on the move. Thanks to my self-driving function, I can cover more ground in a day than ever before,” the tweet read, adding, “Places to go, rocks to see.”

After a few months exploring this area, I’m on the move. Thanks to my self-driving function, I can cover more ground in a day than ever before. Just set a new Martian record of 243.3 meters, and then yesterday, another: 245.76 meters. Places to go, rocks to see! 🪨 pic.twitter.com/XCHSdN1mZBFebruary 6, 2022

The rover had been squatting in place for several weeks to troubleshoot a rock sample it collected, which temporarily choked the machine’s “throat” with Mars rocks. With that problem now cleared, Perseverance is doing some last-minute scouting before attempting a multi-kilometer drive to a nearby delta, recent blog posts indicated.

“The science team has been hard at work preparing for our next phase of science operations, which will take us towards [a] western delta,” a Jan. 31 blog post indicated.

Deltas are areas where water flowed, which could provide a rich environment for the rover’s ultimate mission to collect samples that could have hosted ancient microbes.

“To prepare, the team has been taking long-distance observations of the delta and layers along Artuby ridge with both the Mastcam-Z and SuperCam instruments,” the blog post continued, but it suggested there will be a few pit stops first.

Mission managers must strike a delicate balance between staying in one spot to perform sample collection and moving the rover along to look at other zones in the area.

In the case of the predecessor mission Curiosity, for example, there were periodic debates about how quickly to push the rover to its ultimate destination: Mount Sharp (Aeolis Mons). Curiosity was also finding plenty of signs of water in flatter areas nearby, encouraging periodic pit stops.