Methane recently reached 1,900 parts per billion (ppb) of Earth’s atmosphere according to measurements taken by the National Oceanic and Atmospheric Administration (NOAA) in the US. This compares with about 700 ppb before the industrial revolution.

Methane is a powerful greenhouse gas, but lasts around nine years in the air. Including the knock-on effects it has on other gases, its total global warming impact since 1750 is roughly half that of CO2.

After rising sharply in the 1980s and 1990s, atmospheric methane then stabilized. Growth resumed in 2007 and has accelerated in recent years – the sharpest rise on record happened in 2020.

This was not expected when world leaders signed the 2015 Paris Agreement. Methane is becoming the largest discrepancy from emissions trajectories necessary for meeting the agreement’s target.

So what’s behind the recent surge – and is there a way to reverse it?

Where methane comes from

Emissions from the fossil fuel industry are well over 100 million metric tons a year and grew rapidly in the 1980s. Natural gas, which in the UK heats homes and generates roughly half of electricity, is mainly methane.

Gas industry leaks are widespread at wells and pipelines and from distribution pipes under streets and home boilers. The coal industry was responsible for up to one-third of fossil fuel emissions between 2000 and 2017 via ventilation shafts in mines and during the transportation and crushing of coal for power stations.

Scientists can identify sources of methane by studying the proportion of carbon-12 to carbon-13 in the atmosphere. These different forms of carbon – chemically similar but with different masses – are known as isotopes.

Biogenic methane, made by microbes in rotting vegetation or in cow stomachs, is relatively rich in carbon-12, while methane from fossil fuels and fires has comparatively more carbon-13.

For two centuries, rapidly expanding gas, coal and oil industries steadily drove atmospheric methane richer in carbon-13. Since 2007, that trend has reversed, and the proportion of carbon-13 in atmospheric methane has decreased. Although fossil fuel emissions may still be growing, soaring methane emissions are now primarily the result of faster-growing biogenic sources.

Why are biogenic emissions growing?

Global monitoring shows that in many years since 2007, methane’s growth in the atmosphere has been led from sources in the tropics and sub-tropics. In some years, the high northern latitudes have also been important contributors. 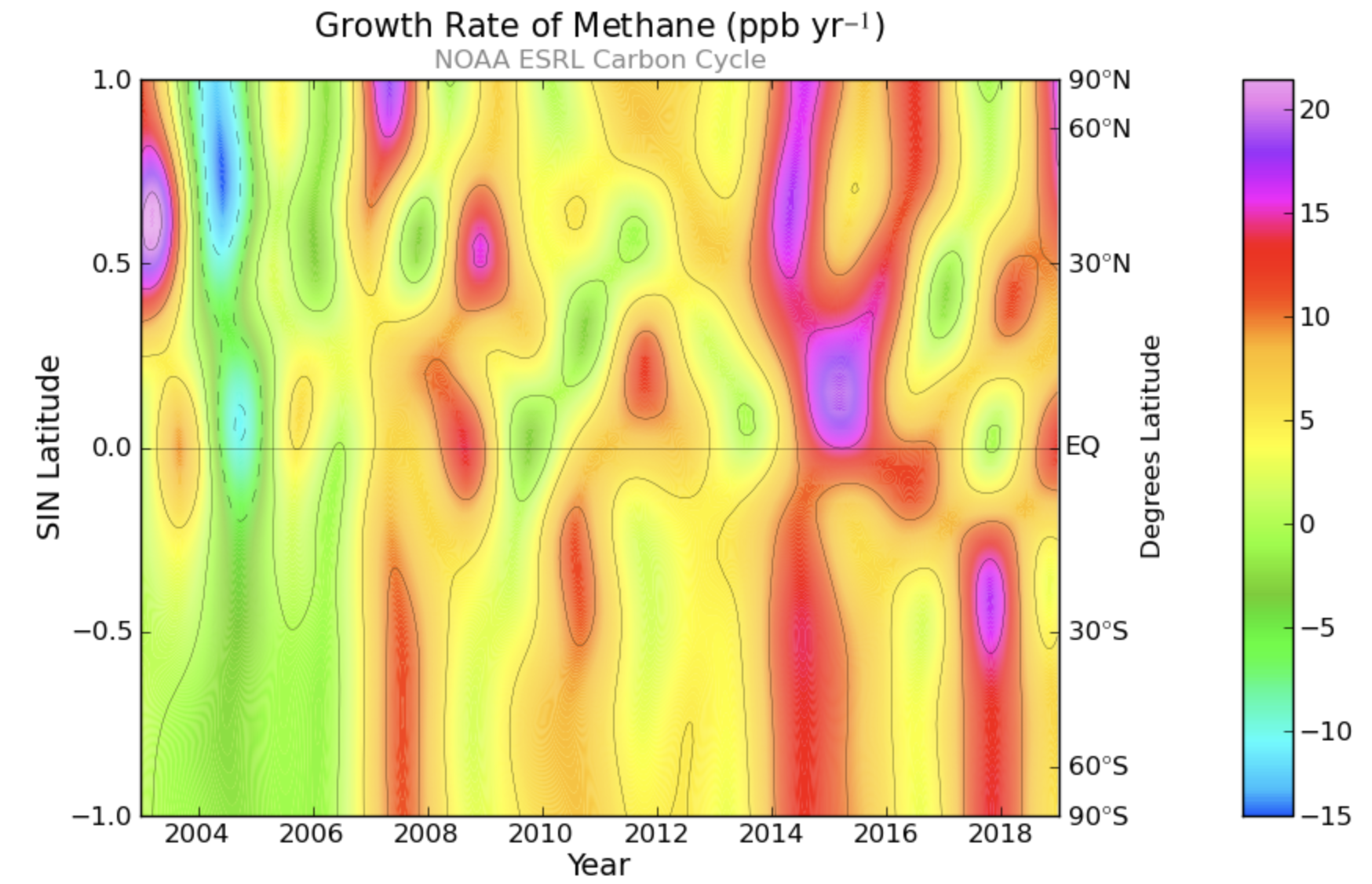 Above: Methane growth rate by year and latitude. The tropics and sub-tropics are between 30°N and 30°S, while the Arctic is north of 66°N.

From tropical swamps in the Amazon, Nile and Congo basins to tundra in Russia and muskeg bogs in Canada, wetlands emit roughly 200 million metric tons of methane a year. As global temperatures increase, the rate at which wetlands generate and decompose biomass grows and these environments release more methane.

The microbes in the stomachs of ruminant animals like cattle, sheep, goats and camels are similar to wetland microbes. In effect, cows are walking wetlands. Ruminants produce nearly as much methane as fossil fuel emissions, roughly 115 million metric tons of annually. Globally, about two-thirds of farmland is animal pasture.

While emissions from landfills have been reduced in many countries in Europe, western Europe emits a lot of methane from biodigesters which convert urban food and garden waste to fertilizer. In Africa and India, expanding cities are creating new landfills while rural areas burn vast quantities of crop waste and grass, causing widespread air pollution, but there is little research on their emissions.

Methane’s short lifetime means that cutting emissions quickly reduces the greenhouse impact. Gas leaks are obvious targets, both at wells and in leaky street pipes. Ending the coal industry is an urgent global priority, not just to cut methane but also CO2 and air pollution.

In the short-term, removing methane from coal mine air ventilation and cattle barns can be done as easily as certain pollutants are removed from car exhausts. Emissions from biodigesters will need stricter government regulation.

Reducing emissions in tropical nations means ending crop waste burning. Landfills are likely to be fast-growing sources of both methane and pollution too, yet emissions can be cut by covering landfills with soil.

Growing agricultural emissions are linked to rapid human population growth and the increasing global demand for a meat-rich diet. Population growth is slowed by improving access to education among women and girls.

Methane hitting 1,900 ppb is a fire alarm. We cannot stop natural wetland emissions. But human-caused emissions can be reduced, quickly. At COP26 in Glasgow – the most recent UN climate change summit in November 2021 – more than 100 nations signed the Global Methane Pledge, promising to cut methane emissions 30 percent by 2030.

Getting started is simple: plug gas leaks, cover landfills, halt crop waste burning and remove methane from coal mine ventilation. All these actions will have wider benefits such as reducing air pollution, but large emitters, including China, India, Russia, Qatar and Australia, did not join. Absentee nations ultimately harm themselves and should sign the pledge.