The line between art and science is sometimes a swirly one. Researchers studying a social bacterium that moves and feeds in coordinated swarms have unintentionally recreated something that looks a lot like a familiar masterpiece.

When a certain gene is overexpressed in a bacterium known as Myxococcus xanthus, the individual organisms self-organize into tiny circular swarms within hours.

Once the resulting swarms are artificially colored, the scene looks remarkably similar to Van Gogh’s The Starry Night. 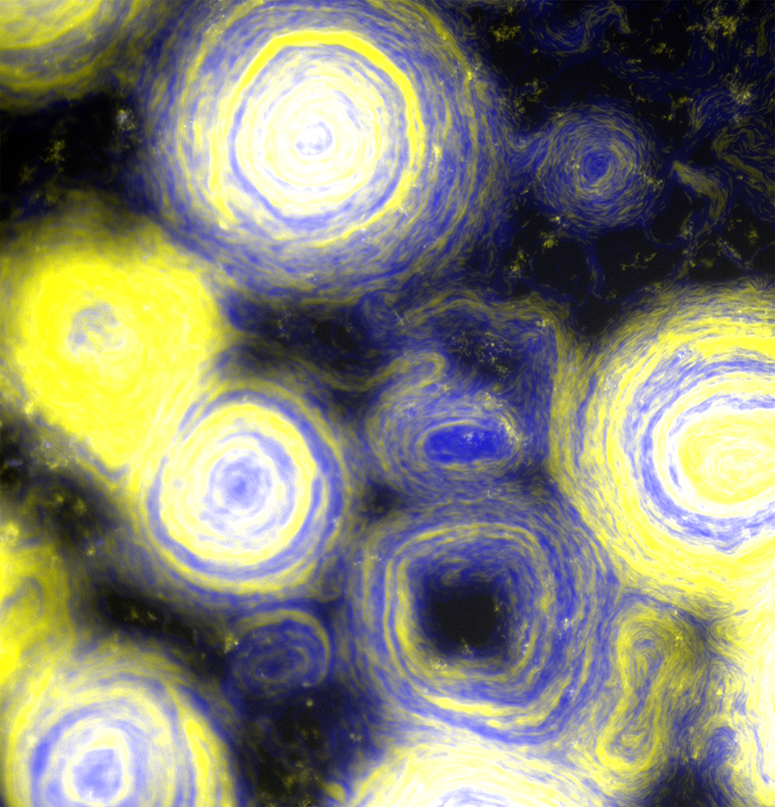 Above: A mixture of two strains of myxobacteria, one that overexpresses TraAB (yellow) and another that is non-adhesive and non-reversing (blue) at x10 magnification.

“Our work highlights how a social bacterium, known for rich sources of therapeutic natural products and as crop biocontrol agents, serves as a powerful model for studying emergent behaviors that also exhibit artistic beauty,” says microbiologist Daniel Wall from the University of Wyoming. 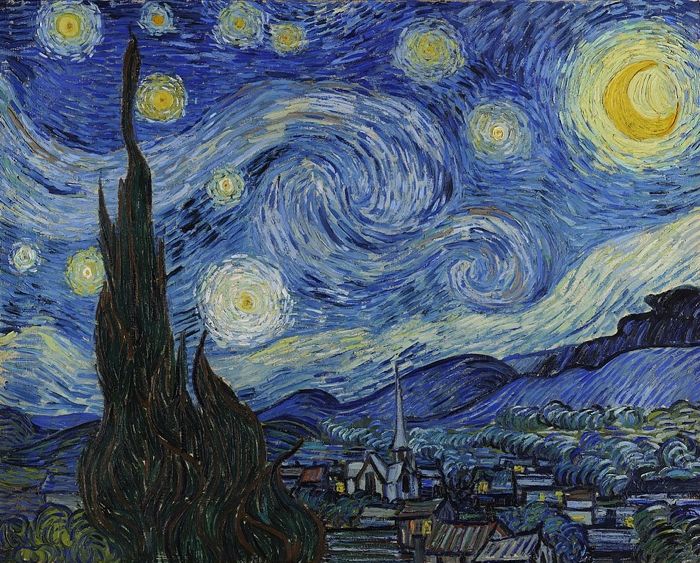 Bacteria have a reputation for being selfish, but M. xanthus is described as a social bacterium because it needs to find and recognize relatives to survive.

After it has formed big, familial clumps, this rod-shaped bacterium is much better at attacking its prey to feed. Each cell produces digestive enzymes that facilitate predatory feeding.

Researchers have been fascinated by this social behavior for years now, but we still don’t have a comprehensive and broadly accepted model for their complex movements.

In 2017, Wall and his colleagues announced the discovery of a single genetic ‘switch’ responsible for turning this grouping behavior on and off.

The switch specifically controls for a protein sequence, known as TraA, which provides a surface receptor for the bacterium to recognize and attach to the partner receptor, TraB, on its kin.

Once it has glued itself to a family member via these two receptors (TraAB), the bacterium can then exchange nutrients and proteins with the rest of the group.

When the swarm encounters food, lab research shows the organisms can actually pool their enzymes and metabolites together via these connections to give the most powerful punch to their prey.

But all of that changes when the team induced mutant bacteria to overexpress TraAB connections. This connection is what allows the cells to stick together in the first place, but when there’s too much of this ‘social glue’, the swarm can’t break apart as easily to change its shape or direction. 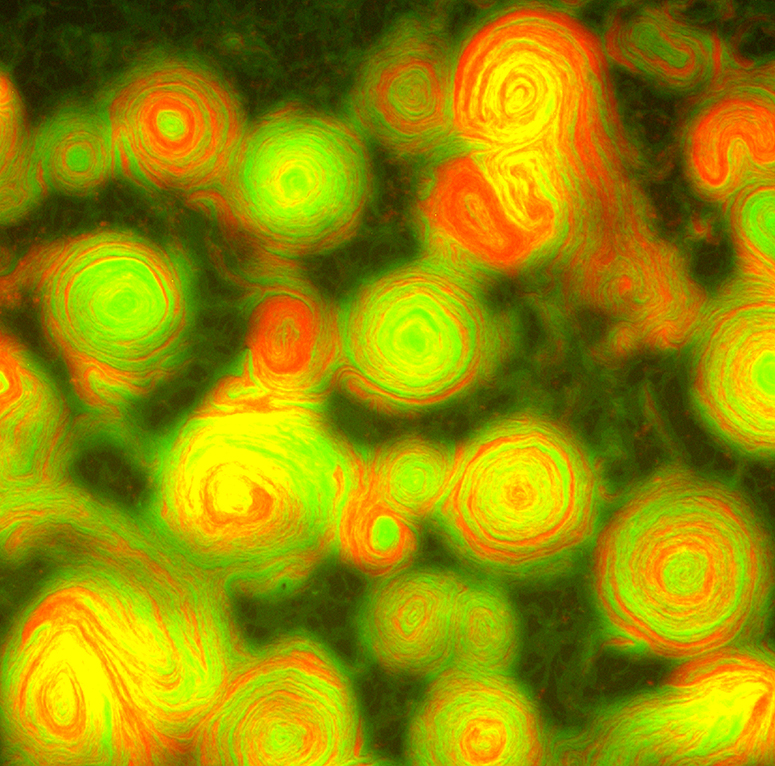 Above: Myxobacteria from a strain that overexpresses TraAB (green) and a strain that is non-adhesive and non-reversing (red) at x4 magnification.

An overexpression of TraAB, however, seems to stop the swarm from switching its head to its tail and vice versa.

This is what computational models suggested would happen, but the authors still couldn’t figure out why. As far as they knew, the TraAB connection wasn’t directly involved in the regulation of the swarm’s movements, only its stickiness.

Ultimately, the team suspected the sticky quality of TraB was indirectly stopping the swarm of cells from changing direction.

“Our idea was maybe there is some sort of contact-dependent signal between cells that suppresses the reversals,” explains Igoshin.

“The cells are in dense groups and are in contact with others all the time, but those contacts are transient. But if TraAB overexpression really makes you sticky, your neighbor will remain your neighbor for longer, and that could trigger the signal that suppresses the reversals.” 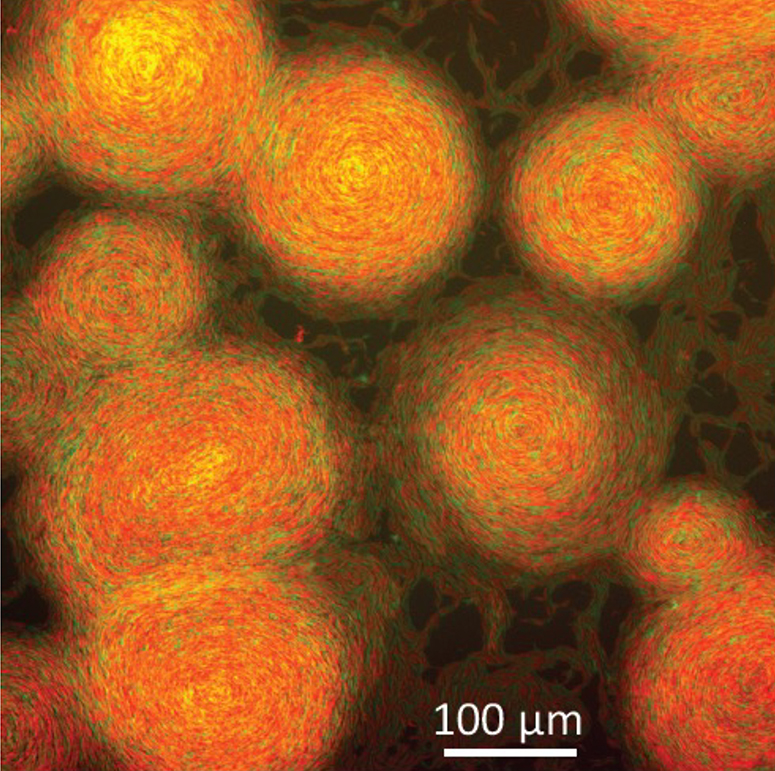 Above: Two myxobacteria strains that overexpress different types of TraA receptors (red and green) that adhere to themselves but not each other.

Running this scenario in computational models, the authors were able to verify their hunch. With only changes to the TraAB connection, the usual head-to-tail swarms suddenly became rotating swirls of cells, as large as a millimeter or more.

Further experiments in the lab then confirmed this also happened to the bacteria in real life. Specifically, the swirls can occur when a strain overexpresses stickiness, but also when a strain is genetically modified to be directly ‘non-reversing’.

The result is not only a better understanding of how millions of cells coordinate their movements, it’s also a mesmerizing picture of the microbial world.

The study was published in mSystems.