The skeletal remains of a man buried 1,400 years ago near a headless horse have been discovered at an ancient cemetery in the town of Knittlingen in southern Germany. He likely was the horse’s owner/rider when he was alive.

The man was buried at a time when the Merovingian dynasty (476–750 CE) flourished in the area, ruling a giant swath of territory in what is now France and Central Europe.

During his lifetime, the man likely served the dynasty’s kings. “He stood in a ‘chain of command’ with the Merovingian kings on its top, which meant he was obliged to participate in the king’s campaigns,” Folke Damminger, an archaeologist in charge of research at the site, told Live Science in an email. (State Office for the Preservation of Monuments in the Regional Council of Stuttgart/ F. Damminger)

Above: The decapitated horse.

Related: Photos: A man, a horse and a dog found in Viking boat burial

“As a member of the local elite, he most probably was the head of a farming household consisting of his family and his servants,” Damminger said. However, the man was not a farmer in a strict sense, as other workers may have done much of the actual farming, Damminger said.

Why exactly he was buried near a headless horse is not clear, but “most probably the decapitation [of the horse] was part of the burial ceremony,” Damminger told Live Science. The horse may have been placed near its owner as a ‘grave good’ for the afterlife rather than a sacrifice, Damminger said. The horse’s head has not been found so far.

His family members would have wanted to portray him as a wealthy and important individual so that they could benefit from his status. “One function of this ceremony was the ‘staging’ of the deceased in his former status and wealth as a claim of his successors to maintain this status,” Damminger said. 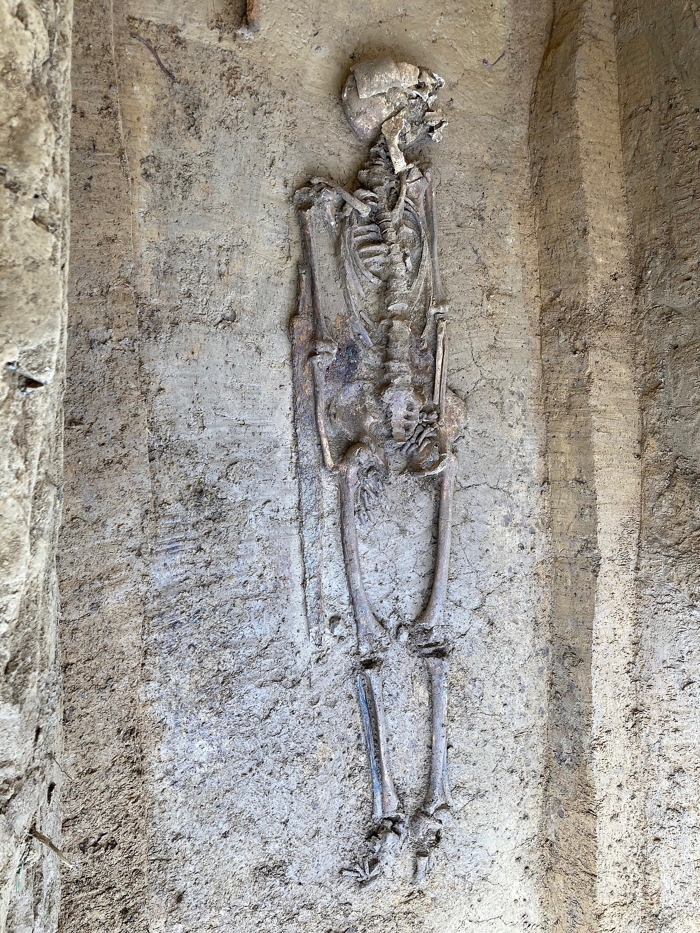 (State Office for the Preservation of Monuments in the Regional Council of Stuttgart/F. Damminger)

Above: Male grave from the first half of the 7th century.

The researchers will continue to investigate the headless horse burial and to excavate other burials at the cemetery. Damminger said that the team is in the process of excavating and restoring the mysterious man’s grave goods, and future anthropological work of the man’s bones and teeth will be done to learn about his health, why he died and how old he was when he perished.

Damminger works for Stuttgart Regional Council’s State Office for Monument Preservation. Much of the excavation work is being carried by archaeologists from the cultural resource management firm ArchaeoBW.

Ancient, gold-lined tombs that may hold princesses discovered in Greece