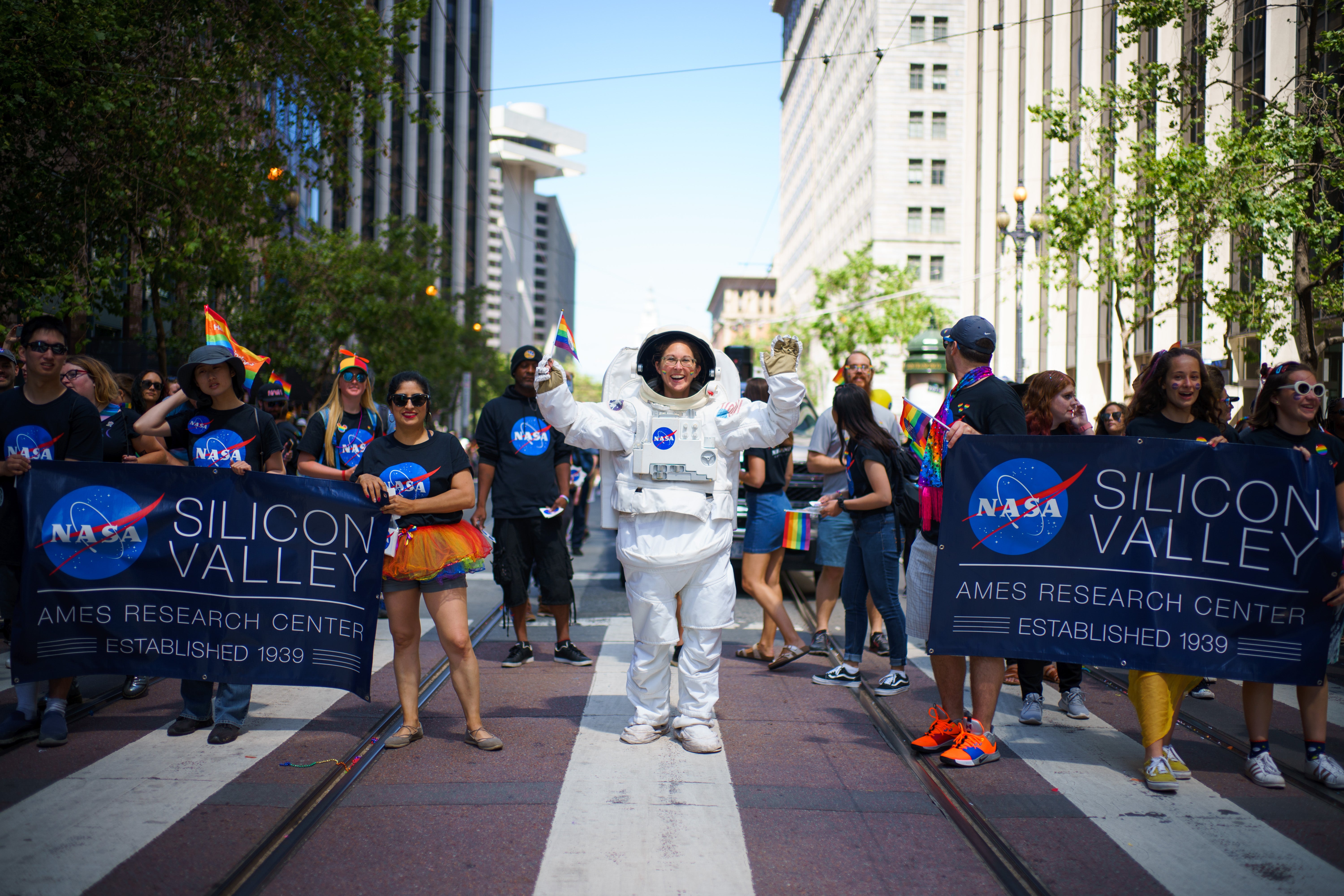 In a move that has been widely criticized, NASA leaders recently terminated a test project that allowed employees at the agency’s Goddard Space Flight Center (GSFC) to display pronouns in their official agency identifiers. The decision affected more than 100 employees who saw their stated pronouns vanish from communication platforms.

The project’s termination attracted public attention after it was described in an anonymous post on Reddit. Scientific American has since verified many of the details revealed by the post with multiple GSFC employees—all of whom spoke under condition of anonymity for fear of reprisal. In the days following the Reddit post, NASA’s pronoun erasure has been called “more than a little disappointing,” “pointlessly cruel” and an indication of “queerphobic leadership” by various astronomers.

“Unfortunately, this is very consistent with my experience there,” says Beck Strauss, a former National Institute of Standards and Technology research scientist working at GSFC and a current member of the International Society of Nonbinary Scientists. “There are a lot of individuals working at NASA and related organizations who really, genuinely want things to be better and want to put their pronouns in their display names and want to make these places more welcoming for people from a lot of different backgrounds and identity groups. But those efforts always fail if they do not have administrative support and access to material resources.”

Recently, NASA has taken steps to fight bias and increase diversity and equity within the agency, including providing gender-neutral bathrooms, instituting dual-anonymous peer review and removing due dates for some project proposals during the COVID pandemic. But the agency’s decision to terminate the GSFC pronoun test also comes on the heels of its refusal to rename the James Webb Space Telescope, a controversy that erupted when astronomers pointed out that the flagship’s namesake—a former NASA administrator—had allegedly been complicit in federal homophobic policies toward government workers in the 1950s and 1960s. And it comes amid a volley of legislation and directives in multiple states that are designed to marginalize and restrict the rights of LGBTQ+ people.

“Unfortunately, as a nonbinary person in astronomy, [this decision] doesn’t seem bizarre to me at all,” says Lucianne Walkowicz, an astronomer at Chicago’s Adler Planetarium and co-founder of the JustSpace Alliance. “Because trans and gender nonconforming people experience high rates of harassment, assault and other forms of violence, each moment we have to assert our identities carries risk. At its most benign, this may be a co-worker feeling slighted by our having to correct them in order to be seen as ourselves, and at the more extreme end, it can open the door to bullying, harassment or worse.”

Organized by a handful of management officials within GSFC, the pronoun-inclusive effort was “a tech demo”—a prepilot program, a Goddard employee says, that was a first step toward addressing concerns that included issues with removing deadnames from the agency’s IT system. (A deadname is the name a transgender or nonbinary person had before transitioning.) In searching for solutions, the GSFC team spoke with NASA Headquarters, as well as legal departments and employee resource groups at the agency. In other words, “this wasn’t a bunch of people going rogue,” says a scientist at GSFC.

During that process, the GSFC team identified an option that would let employees add their pronouns to their display names, which are used in electronic communications, including e-mail, contact lists, instant messaging platforms and Microsoft Teams environments. Usually, those identifiers include “[Last name],” “[First name]” and “[NASA Center-XXX],” where the “XXX” would be replaced by a three-digit organizational code. But by filling in an optional field that is typically used for nicknames, employees could add pronouns after their names. It was an efficient and inexpensive way to make a necessary change, employees say, and did not require any additional coding or IT investments.

“Having the ability to display pronouns—particularly in visible, prominent places, not tucked away at the bottom of an e-mail signature—removes significant burdens for trans and gender nonconforming people,” Walkowicz says. “Like all people, trans and gender nonconforming scientists don’t want to be constantly self-advocating in order to be themselves in peace. We would actually much prefer to have our pronouns where you can see them so we can all get on with our lives and do some science.”

Driven by word of mouth, rather than any official encouragement, over a month or so, more than 100 GSFC employees added pronouns to their identifiers. And, a Goddard employee adds, participants were told that the tech demo would pave the way for an official pilot program at GSFC and perhaps even be deployed agency-wide.

“It was cool to see that in people and be surprised in a good way,” the GSFC scientist recalls. “And that’s part of why it was so devastating to be surprised in the opposite way because I felt like we were making progress.”

Instead it all came to an abrupt and baffling halt.

In late February participants learned they were being called to a meeting on the “Use of IT Systems for Gender Pronouns.” Several of them thought, “Great, we will be getting kudos for a system that is working well.” But one of the leaders of GSFC’s LGBTQ+ employee resource group sent a warning about what was coming.

During the hour-long meeting, Melroy and the others made it clear that the test program was over—that the decision was final—although they said they were hoping NASA could formally implement a similar, long-term policy. Yet employees said the presenters offered no satisfactory explanation for the timing of the termination or the rationale behind it. Among the various reasons discussed were concerns about the pronoun field being used for inappropriate identifiers, including nationalities and sports team affiliations; that the program had been implemented without approval by proper personnel; and that this was not what IT systems were designed for.

Shih later elaborated in a conversation with Scientific American. “The intention wasn’t to trivialize the huge importance of gender pronouns for the LGBTQ+ population,” he says. “And unfortunately, communication wasn’t obviously as effective as we would like. I think people got the impression that we were trying to trivialize the whole focus on gender pronouns. That was not the intent at all, certainly not trying to equate gender pronouns on the same level as sports teams. In fact, I think the opposite intention was there, which is to say, you know, a sports team identifier wouldn’t rise to this level to be included in the system.”

The meeting was fraught and contentious, participants say: “People walked away [feeling] all sorts of things—frustrated, pissed off, emotional, hurt,” says the GSFC employee. “I can’t tell you how much I think this has really harmed the transgender and nonbinary employees in our organization.”

At the end of the hour, Melroy and Andrucyk left, but Shih stayed on and continued speaking with employees, some of whom explained how the decision would cause direct harm.

“I’m the person who leads DEIA [diversity, equity, inclusion and accessibility] across the agency, and so I take responsibility for any poor communication and the mistakes that were made in communicating,” Shih says. “My door is always open; my phone is always open to any individuals who want to discuss these issues further.”

But GSFC employees are not giving up. In a recent tweet, astrophysicist Amber Straughn wrote, “There are lots of us trying to do what we can to push back. This is total nonsense.”

In the wake of the project’s termination becoming public, NASA released an official statement from Shih:

Through an effort to create a more inclusive workplace, NASA recently completed an IT project at Goddard Space Flight Center that allowed approximately 125 employees to test the option of including their gender pronouns in NASA’s email display fields—which currently includes each employee’s name, center, and an organizational code. The learnings from this test will be used to inform the advancement of diversity, equity, inclusion, and accessibility.

NASA is fully committed to supporting every employee’s right to be addressed by their correct name and pronouns. All NASA employees currently have the option and flexibility to include their gender pronouns in their customized email signature blocks. This option remains unchanged and is supported by NASA leadership so that employees can share their gender identities and show allyship to the LGBTQIA+ community.

Shih later told Scientific American the agency had terminated the program because the test had achieved its goal—it had demonstrated that existing systems could be used to display pronouns—and NASA was focused on increasing diversity, equity, inclusion and accessibility throughout its workforce.

“We want to look at all of these DEIA advancements in a strategic way and across the entire agency,” Shih says. We want to do this more than just at a local level at one organization in NASA.”

Strauss, who is also a senior fellow at the Center for Applied Transgender Studies, says that regardless of the reasoning behind the decision, it sends a signal to trans and nonbinary scientists. “A lot of students look to these organizations as indicators of whether they are welcome in the fields where they want to work,” they say. “I started and used to run a networking group for nonbinary people in space science, which has more than 70 people in it…. And I look at this group, which is mostly graduate students and undergrads and some postdocs, and I have to really ask myself, ‘Do I want to be telling my students to apply for summer internships at an organization that’s going to be so cavalier about people’s pronouns and names and identities?’”