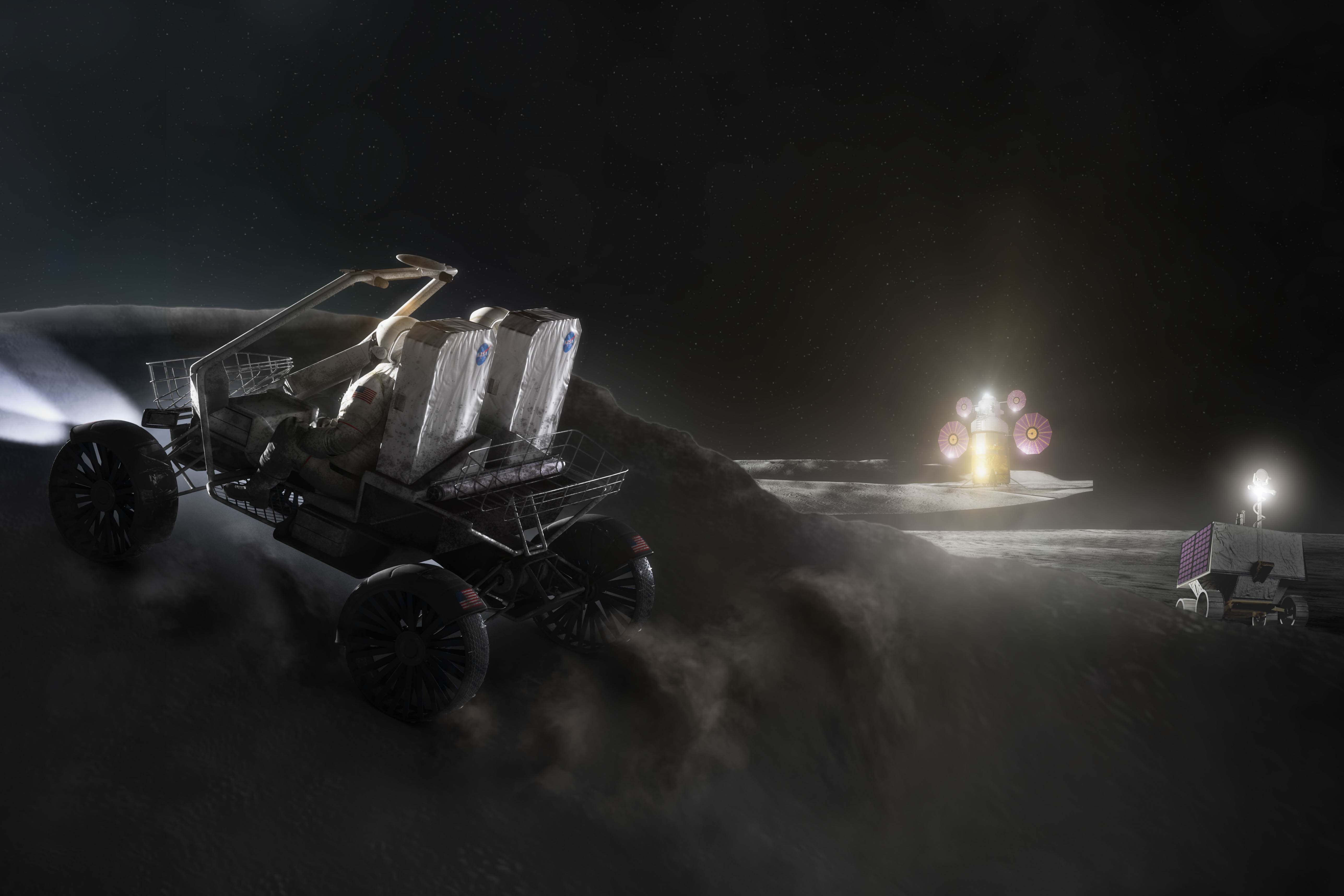 Of the many “firsts” from NASA’s Apollo program of lunar exploration, one often overlooked is that the Apollo missions included the first—and so far only—times that humans have driven on another world. Presaging today’s eco-conscious market for carbon-neutral transportation, Apollo’s battery-powered lunar roving vehicles were all-electric as well. Astronaut David Scott, who was the first person to drive one on the moon during the Apollo 15 mission, remarked that the “moon buggy” vehicles were “about as optimum as you can build.” Astronauts used them in Apollo 16 and 17, too. During those missions, the vehicles traversed an average of just over 30 total kilometers of lunar terrain and reached a top speed of 18 kilometers per hour. These vehicles were considered disposable: each ran only for a matter of hours before being discarded on the moon at mission’s end.

Fast-forward to today, when NASA is once again aiming for astronauts on the moon: the space agency’s Artemis III mission is slated to ferry a crew to the vicinity of the lunar south pole as soon as 2025. But this time an Apollo-like moon buggy will not suffice. NASA’s plans call for Artemis’s first moonwalking astronauts to spend a week exploring the region around their landing site, which is intended to become a sort of base camp for future lunar forays. For those sorts of high-endurance operations, a suitably high-endurance vehicle would be desirable, too. Last August NASA said as much in a video announcing a request for information for a new lunar terrain vehicle. “This isn’t your grandfather’s moonbuggy,” read bold text in black and pink while an electric guitar vamped in the video, “but it might be his granddaughter’s”—an allusion to Artemis III’s goal of putting the first woman on the moon.

Importantly, the lunar terrain vehicle is just one member of the automotive fleet that will support Artemis’s astronauts. The Volatiles Investigating Polar Exploration Rover, (VIPER), another lunar rover, will not chauffeur people but instead will roam uncrewed around the moon’s south pole for 100 days in search of water ice. The agency is also considering a third vehicle—a pressurized “habitable mobility platform” that could transport crews for up to 45 days.

The crewed lunar terrain vehicle should be designed to last at least a decade, according to NASA’s requirements. It would support a bevy of one- and two-week missions, and it could even explore the surface of the moon autonomously between human visitations. Moreover, its design would set the standard for subsequent generations of surface vehicles built to support notional future human landings on Mars.

In response to those challenges, space agencies are drawing on the deep experience of commercial automobile manufacturers to design durable rovers from scratch. At least two partnerships have sprung up to vie for NASA’s next lunar terrain vehicle: One between General Motors and Lockheed Martin was announced last May. And another between Northrop Grumman, AVL, Intuitive Machines, Lunar Outpost and Michelin launched last November. Planetary scientists have even started to think beyond the moon: a recent Keck Institute for Space Studies workshop convened agency, academic and industry researchers to consider bolder ideas for the Martian surface, such as retrofitting a commercial electric vehicle for space use.

Across the Pacific, Japan is undertaking a parallel process. The Japan Aerospace Exploration Agency (JAXA) has partnered with Nissan and Toyota for two different lunar driving projects. In December Nissan unveiled an uncrewed lunar rover prototype that incorporates front and rear electric motors to navigate bumpy terrain. Toyota, meanwhile, is designing a crewed, pressurized lunar cruiser that is powered by hydrogen fuel cells and would ostensibly fill the same role as NASA’s habitable mobility platform. Toyota officials announced in January that, following the cruiser’s deployment to the moon, the company will work on adapting it for use on Mars.

“We’re converging on a point for planetary and commercial vehicles where we’re utilizing the same kinds of techniques to operate these vehicles, get them to drive autonomously and avoid obstacles,” says Paul Niles, a planetary scientist at NASA’s Johnson Space Center. “Certainly, automation would help, and that kind of [partnership] would be really synergistic.”

The moon and Mars present an overlapping set of difficulties for a reusable rover. The first step is simply getting there: although SpaceX hopes to greatly lower the cost of launches with Starship, the company’s in-development and purportedly fully reusable heavy-lift rocket, putting anything as big as a car into space remains a lofty investment. (Then again, SpaceX has already done that, too—and has whimsically teased what could be nascent plans to someday send a Tesla Cybertruck to Mars.)

Once deposited on either body, a vehicle would have to contend with unearthly extremes in temperature. Mars receives only about half as much of the sun’s warming radiance as Earth, and the Red Planet’s atmosphere is too tenuous to hold on to much heat, Niles says.

“On your worst day on top of Mount Everest, it’s like your warmest day on Mars,” he says. “While the rocks on the surface can actually get pretty warm, almost up to zero degree Celsius, the air is really cold.”

The situation on the moon is even more extreme. The moon rotates more slowly than Earth, making a lunar day last around 29.5 Earth days. This means a multiuse vehicle would have to survive a weeks-long lunar night—a feat that derailed China’s Yutu rover in 2014. Temperatures can reach a blistering 127 degrees C during lunar days, only to plunge to –173 degrees C during lunar nights. Furthermore, the moon’s lack of a heat-distributing atmosphere means that shadowed regions can become extremely cold, even during the long lunar day. For a rover to endure these extremes, it must somehow store energy and retain heat through the lunar night without access to solar power—but it must also avoid overheating when bathed in harsh sunlight for weeks at a time.

“Being able to survive that [lunar] night is absolutely critical, or you’re just throwing up disposable rovers at that point,” says Derek Hodgins, strategy and business lead of Lockheed Martin’s lunar exploration arm.

Another hurdle that a vehicle must surmount in space is radiation. Earth’s atmosphere and magnetic field act as shields against high-energy particles ejected by the sun and cosmic rays, each of which can degrade materials and damage delicate electronics. But neither the moon nor Mars offers similar protections. Surface rovers meant to operate there for years on end must include radiation-hardened electronics, as well as greater redundancies in the inevitable event of parts-based failures, says Jeff Nield, director of product and experience for global industrial design at General Motors.

Finally, the moon and Mars possess a much weaker gravitational field than Earth, which can subtly affect a vehicle’s operations. Less gravity may actually help an electric-powered vehicle carry burdens such as astronauts and travel farther than a similar car on Earth could with the same power supply. But the calibration and suspension of a rover on the moon or Mars would need to be adjusted for an altered center of gravity, says Bethany Ehlmann, a planetary scientist at the California Institute of Technology.

Solutions: From Scratch or Out of a Box?

The two partnerships designing lunar vehicles for NASA are undeterred by these challenges, enough so to develop their prototypes without the certainty of a contract with the agency. NASA has solicited multiple requests for information for the lunar terrain vehicle, but it has yet to release a formal request for proposal, which would signal its ability to foot the bill.

“There’s never been an 100 percent industry-led development of a human space system that has flown or held American astronauts,” Nield says, adding that the recently completed Commercial Crew Program received 7 percent of its funding from industry, with NASA picking up the remaining 93 percent of the multibillion-dollar tab.

GM and Lockheed Martin’s bet is probably not all that risky, though: According to Hodgins, the Apollo missions generated up to a 700 percent return on investment for industry partners, based on technology that was developed for space and applied to Earth. These included pumps for artificial hearts and some of the flame-resistant materials used in firefighting suits.

This time around, the translatable innovations may be related to autonomous driving and user ergonomics. Autonomous technology would allow a rover to scout potential landing sites, pre-position cargo and collect samples to prepare for or augment crewed missions. And designing a vehicle’s cabin to better accommodate spacesuit-clad passengers and crew would be essential. Improvements in both areas could cascade into consumer products on Earth in the form of better self-driving cars or vehicles with enhancements for users with limited mobility. The GM–Lockheed Martin rover, for instance, has a roomier, more astronaut-amenable interior where grab handles aid movement and glove-friendly buttons and switches take priority over touch pads.

But this sort of custom-built approach is only one solution to the space problem. Other researchers, Niles and Ehlmann among them, see potential for designs that simply use an existing consumer electric vehicle’s chassis and then retrofit it with adaptations needed for extraterrestrial operations. They both contributed to the workshop last March on revolutionizing access to Mars’s surface that was borne out in a Keck Institute for Space Studies report published this month. The report’s appendix concluded with a case study on the cost and process of adapting an off-the-shelf commercial electric vehicle for Mars.

In theory, if enough components remain untouched, the cost of revamping an existing vehicle would be much lower than designing one from scratch, says Ehlmann, who co-led the workshop.

Commercial electric cars have more features that would suit them for Mars in addition to their batteries and ability to function at low temperatures. Despite differences in atmospheric pressure on Earth and Mars, sealed and pressurized components of the cars would likely not be affected, according to the report. Additionally, commercial vehicles have gone through years of stress testing to be sold on the market, in contrast with rovers tailor-made for space.

Still, Ehlmann says the idea remains only a thought experiment. The report’s off-the-shelf approach, however, represents the sort of outside-the-box thinking that could hasten progress toward human voyages to Mars.

“There’s so much excitement about the science to be done,” she says. “It’s useful to think about missions not as one-offs but as a real commitment to have a U.S. presence on the moon and Mars, both robotically and one day in person.”