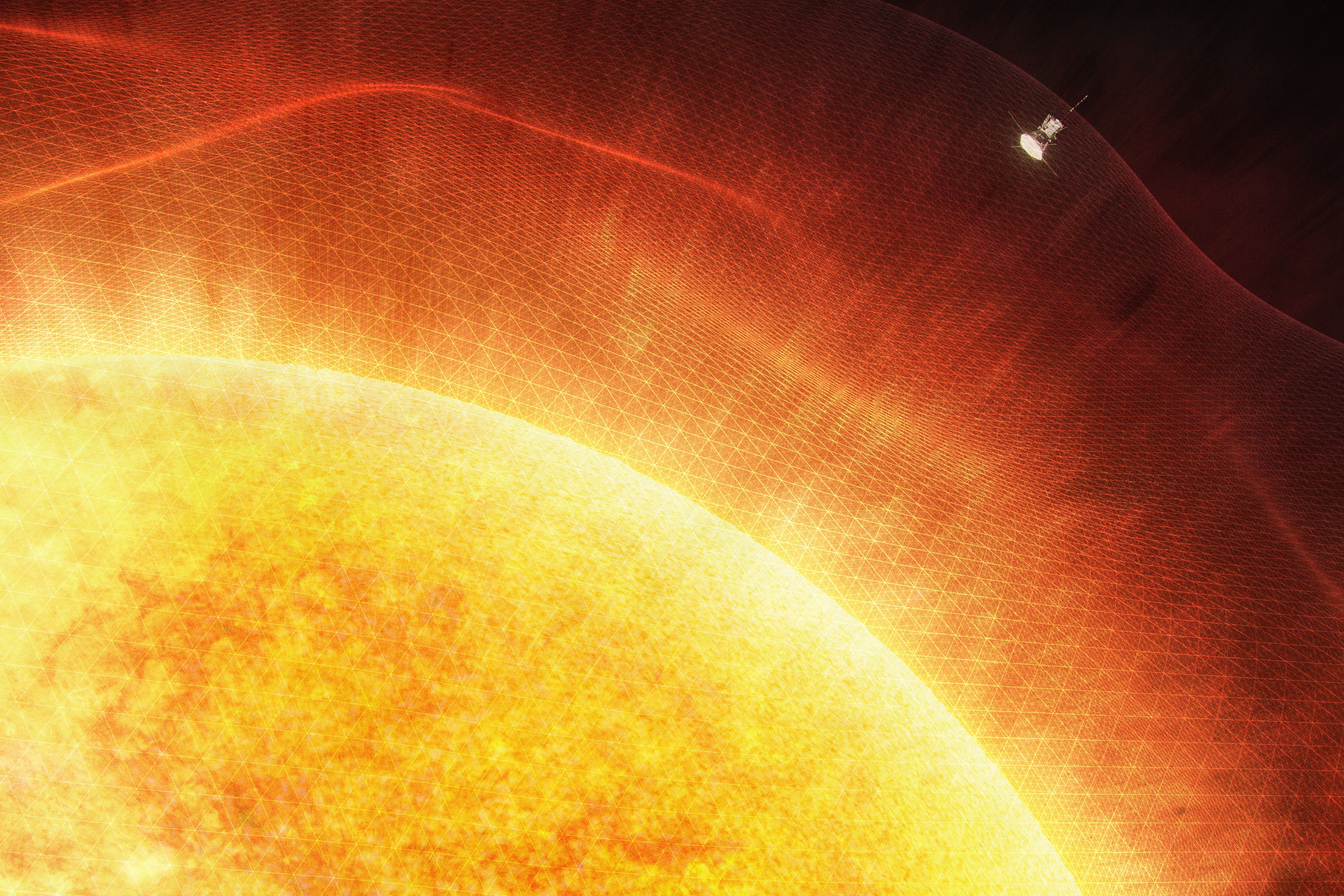 A NASA spacecraft has entered a previously unexplored region of the Solar System—the Sun’s outer atmosphere, or corona. The long-awaited milestone, which happened in April but was announced on 14 December, is a major accomplishment for the Parker Solar Probe, a craft that is flying closer to the Sun than any mission in history.

“We have finally arrived,” said Nicola Fox, director of NASA’s heliophysics division, located at the agency’s headquarters in Washington DC. “Humanity has touched the Sun.”

She and other team members spoke during a press conference at this week’s American Geophysical Union meeting in New Orleans, Louisiana. A paper describing the findings appears in Physical Review Letters.

In many ways the Parker Solar Probe is a counterpoint to NASA’s twin Voyager spacecraft. In 2012, Voyager 1 travelled so far from the Sun that it became the first mission to leave behind the region of space dominated by the solar wind—the energetic flood of particles coming from the Sun. By contrast, the Parker probe is flying ever closer towards the heart of the Solar System, head-on into the solar wind and into our star’s atmosphere. With this new front-row seat scientists can explore some of the biggest unanswered questions about the Sun, such as how it generates the solar wind and how its corona gets heated to temperatures more extreme than those on the Sun’s surface.

“This is a huge milestone,” says Craig DeForest, a solar physicist at the Southwest Research Institute in Boulder, Colorado, who is not involved with the mission. Flying into the solar corona represents “one of the last great unknowns”, he says.

The Parker probe crossed into the Sun’s atmosphere at 9:33 a.m. Universal Time on 28 April of this year. It took several months for mission scientists to download and analyse the data it collected, and to be sure that the spacecraft had indeed crossed the much-anticipated boundary, known as the Alfvén surface.

This surface marks the interface between the Sun’s atmosphere and an outer region of space dominated by the solar wind. Swedish physicist Hannes Alfvén proposed the underlying theory behind the boundary in a paper in Nature in 1942, and scientists have been looking for it ever since.

But it took the $US1.5-billion Parker Solar Probe to finally get there. Since its launch in 2018 it has been orbiting the Sun, and looping ever closer to the solar surface on each pass. A carbon-composite heat shield protects its instruments from temperatures that will eventually soar to 1,370 °C.

The spacecraft crossed the Alfvén boundary when it was around 14 million kilometres, or just under 20 solar radii, from the Sun’s surface. That’s about where team members had expected to find the interface, says Nour Raouafi, the mission’s project scientist at the Johns Hopkins University Applied Physics Laboratory in Laurel, Maryland.

Some researchers had speculated that the boundary would be rather ‘fuzzy’, but it was instead somewhat sharp and wrinkly. The spacecraft passed into the corona for nearly five hours and then back out again, and might have crossed into it briefly twice more. Inside the corona, the solar wind speed and plasma densities dropped, suggesting the boundary had indeed been crossed. “We are learning new things that we did not have access to before,” Raouafi says.

As it crossed the Alfvén surface, the Parker probe flew through a ‘pseudostreamer’ of electrically charged material, inside which conditions were quieter than the roiling environment outside. While inside the corona, the spacecraft also studied unusual kinks in the magnetic field of the solar wind, known as switchbacks. Scientists knew about switchbacks previously, but the Parker Solar Probe data have allowed them to trace where they come from, all the way down to the solar surface.

Knowing how such features form on the Sun, and how they influence the solar wind and other eruptions of charged particles, will help people on Earth better prepare for disruptive space weather, such as when solar storms knock out satellite communications. The discoveries will also help researchers better understand the forces that power stars other than the Sun, said Kelly Korreck, a solar physicist at NASA’s headquarters.

The Parker Solar Probe ultimately aims to make 24 close passes by the Sun. It crossed the Alfvén surface on the eighth of those flybys, and might have done so again during its ninth pass in November 2021—a manoeuvre for which the data have not yet been fully downloaded and analysed. The mission’s closest approach is scheduled for 2025 at a distance of just 6.2 million kilometres from the solar surface, well within the orbit of Mercury. Each visit will continue to reveal new information about processes within the corona, said Justin Kasper, a solar physicist and deputy chief technology officer at BWX Technologies in Washington DC, who works on the Parker probe.

“Being this close to the Sun is allowing us to make really interesting and new connections we wouldn’t be able to do from afar,” he said.

This article is reproduced with permission and was first published on December 14 2021.