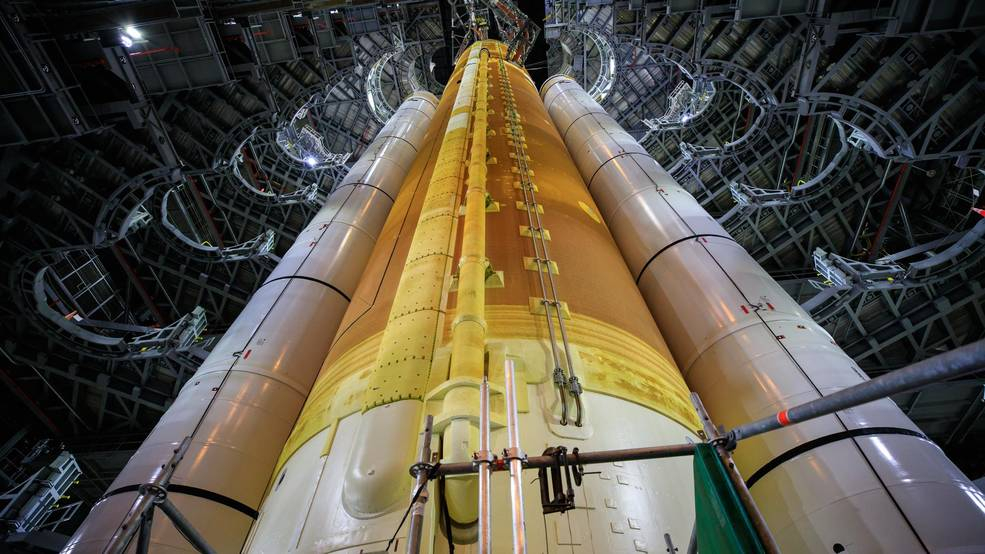 NASA’s Artemis 1 moon mission may end up being a summertime affair.

An April launch is no longer possible for Artemis 1, which will send an uncrewed Orion spacecraft around the moon using a huge Space Launch System (SLS) megarocket, agency officials said today (Feb. 24). And May could be difficult to hit as well.

“We continue to evaluate the May window, but we’re also recognizing that there’s a lot of work in front of us,” Tom Whitmeyer, deputy associate administrator for exploration systems development at NASA headquarters in Washington, said today during a virtual news conference.

Some of that work will involve analyzing data from the Artemis 1 “wet dress rehearsal,” a crucial test that will take the SLS-Orion stack through many of the milestones it will hit on launch day (liftoff excluded, of course).

Like the launch, the wet dress rehearsal will take place on Pad 39B at NASA’s Kennedy Space Center (KSC) in Florida. SLS and Orion are scheduled to roll out to the pad from KSC’s cavernous Vehicle Assembly Building (VAB) at 6 p.m. EST (2300 GMT) on March 17, agency officials announced today. It’ll likely take about 12 hours for the huge vehicle to make the relatively short trek to the pad.

The SLS-Orion stack will probably spend about a month on Pad 39B, with roughly two weeks on either side of the wet dress rehearsal, agency officials said. The vehicle will then roll back to the VAB for further analysis and processing.

The May launch window runs from the 7th through the 21st, Whitmeyer said. If Artemis 1 isn’t ready to go by then, the next opportunity comes from June 6 through June 16. And the next window after that runs from June 29 through July 12.

These windows are limited for a variety of reasons, Whitmeyer said. He cited, among other factors, performance constraints on the SLS, the need to line the launch up properly with Earth’s rotation and the position of the moon, and the fact that the solar-powered Orion isn’t designed to fly through eclipses that last longer than 90 minutes.

Artemis 1 is a huge mission for NASA and its Artemis program of crewed lunar exploration, so the agency is taking its time to make sure everything is in order before it lifts off. Artemis 1 will mark the first-ever flight of the huge and powerful SLS and the second mission for Orion, which flew to Earth orbit atop a United Launch Alliance Delta IV Heavy rocket in December 2014.

If all goes well during the roughly 26 days of Artemis 1, NASA will start gearing up for Artemis 2, which will send astronauts on a journey around the moon. That landmark flight — NASA’s first crewed mission beyond Earth orbit since the Apollo era — is tentatively scheduled for 2024. Artemis 3 will put astronauts on the moon in 2025 or thereabouts, using a SpaceX Starship vehicle, if all goes according to plan.

And that lunar touchdown isn’t the Artemis endpoint. The program aims to establish a long-term, sustainable human presence on and around the moon. The lessons and skills gained from doing so will aid NASA’s next giant leap — putting astronauts on Mars, which the agency aims to do in the 2030s.