As it’s the foundation for all life on Earth, discovering carbon on other planets always gets scientists excited – and the Curiosity Rover on Mars has found an unusual mix of the chemical element that could hypothetically point to the existence of alien life.

That’s by no means certain, but it’s a possibility. It’s one of three different scenarios that experts think might have produced the carbon found in sediment in the Gale crater, collected across nine years from August 2012 to July 2021.

A total of 24 powder samples were heated by Curiosity to separate individual chemicals, revealing a wide variation in terms of the mix of carbon 12 and carbon 13 isotopes: the two stable carbon isotopes that can reveal how the carbon cycle may have changed over time. 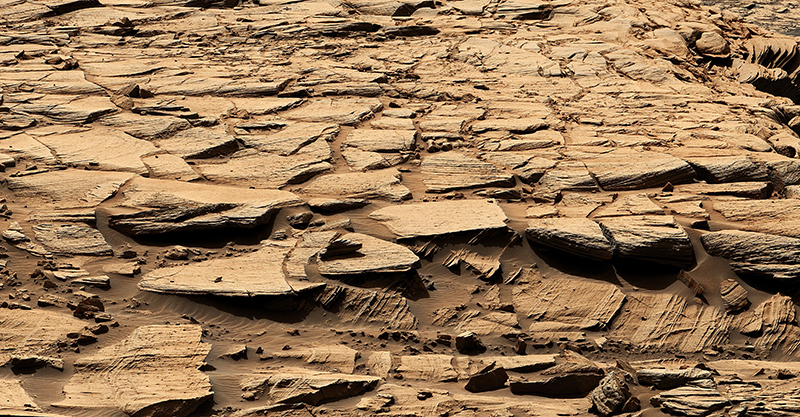 Part of the Martian landscape where samples were taken. (NASA/Caltech-JPL/MSSS)

What makes these variations particularly fascinating – some samples enriched with carbon 13, and some extremely depleted – is that they point to unconventional processes different to those created by the carbon cycle in Earth’s modern era.

“The amounts of carbon 12 and carbon 13 in our Solar System are the amounts that existed at the formation of the Solar System,” says geoscientist Christopher House from Pennsylvania State University.

“Both exist in everything, but because carbon 12 reacts more quickly than carbon 13, looking at the relative amounts of each in samples can reveal the carbon cycle.”

One explanation for the carbon signatures is a giant, molecular cloud of dust. The Solar System passes through one of these every couple of hundred million years or so, and the cooling effect it creates leaves carbon deposits in its wake. This is a plausible scenario, the team says, but one that needs more investigation.

Alternatively, the conversion of CO2 to organic compounds (like formaldehyde) through abiotic (non-biological) processes could explain what Curiosity has found – in this case, ultraviolet light might have been the trigger. It’s something scientists have hypothesized about before, but again further study is required to confirm whether or not this is actually what’s happening.

That leaves the third explanation, which is that either ultraviolet light or microbes once upon a time converted methane produced by biological processes – that we’re looking at carbon created as a result of life. As with the other two possibilities, we’re going to need more surrounding evidence to know for sure, but there are some parallels on Earth.

“The samples extremely depleted in carbon 13 are a little like samples from Australia taken from sediment that was 2.7 billion years old,” says House.

“Those samples were caused by biological activity when methane was consumed by ancient microbial mats, but we can’t necessarily say that on Mars because it’s a planet that may have formed out of different materials and processes than Earth.”

Curiosity’s mission carries on, of course. The future discovery of the remains of microbial mats, or substantial methane plumes, or traces of long-lost glaciers would help the scientists figure out which one of these three explanations is most likely.

For now though, we just don’t know enough about Mars and its history to be able to come to any conclusions about how these carbon signatures came about. Further drilling is planned at the spot where many of these samples were collected in a month’s time.

Curiosity has recently been joined by the Perseverance rover, which is planning to return Martian rocks to Earth rather than experimenting on them in situ. Expect much more to be revealed by these two robotic explorers over the coming years.

“All three possibilities point to an unusual carbon cycle unlike anything on Earth today,” says House. “But we need more data to figure out which of these is the correct explanation.

“We are being cautious with our interpretation, which is the best course when studying another world.”