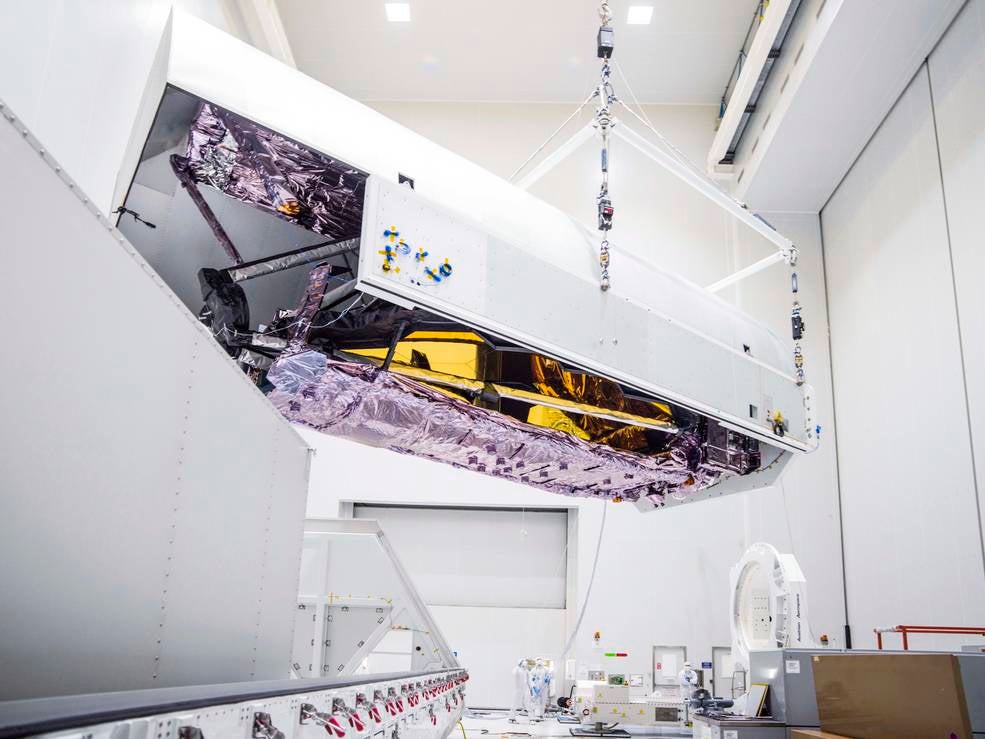 The new James Webb Space Telescope is topped off and one step closer to taking flight.

Mission team members have finished fueling the James Webb Space Telescope at ahead of its planned Dec. 22 launch from the Guiana Space Center in Kourou, French Guiana, the European Space Agency announced Monday (Dec. 6). The fueling for Webb, which is an international collaborative effort between NASA, ESA and the Canadian Space Agency, took 10 days and was completed on Dec. 3, according to the ESA statement.

After a series of delays since the development of the scope first began in 1996, Webb is still on track to finally launch Dec. 22 atop an Arianespace Ariane 5 rocket from the Guiana Space Center in Kourou, French Guiana.

“Webb’s propellant tanks were filled separately with [21 gallons] 79.5 l of dinitrogen tetroxide oxidizer and [42 gallons] 159 l hydrazine,” the ESA wrote in the announcement, adding that the oxidizer “improves the burn efficiency of the hydrazine fuel.”

Now that Webb is fueled, the mission team will begin “combined operations,” according to the statement. In this phase, the teams behind the rocket and the telescope will come together to mount Webb on the Ariane 5 rocket and encapsulate it within the rocket’s fairing. The newly joined pair will then be moved to the Final Assembly building for final preparations before liftoff.

Once successfully launched and in space, Webb will begin a complicated series of deployment maneuvers to unfurl its solar arrays on its way to its ultimate destination where it will begin making observations.

Webb is destined for a location in space 930,000 miles (1.5 million kilometers) away known as L2, a Lagrange point or a stable gravitational location in space. Upon arrival, the telescope will spend six months in a “commissioning period” during which the team will ensure that it unfolded correctly and its instruments are working correctly.

Webb was previously set to launch Dec. 18 (after many previous delays, budgetary concerns and more) but, as NASA reported, a clamp band that holds Webb to the launch vehicle adapter that will allow it to be integrated into the Arianespace launch vehicle had released unexpectedly. Teams investigated the unexpected event and performed additional testing before setting a new launch date and moving on to run a “consent to fuel” review before beginning fueling.

Webb, which will observer the universe in infrared light, is set to be the most powerful telescope ever launched into space. Scientists aim to use the instrument to peer farther out into the cosmos than ever before, giving them an unprecedented peek into our universe’s past.

Scientists hope that Webb’s powerful observational technology will allow researchers to uncover more information about the early universe, explore mysterious things such as dark matter and dark energy and so much more.