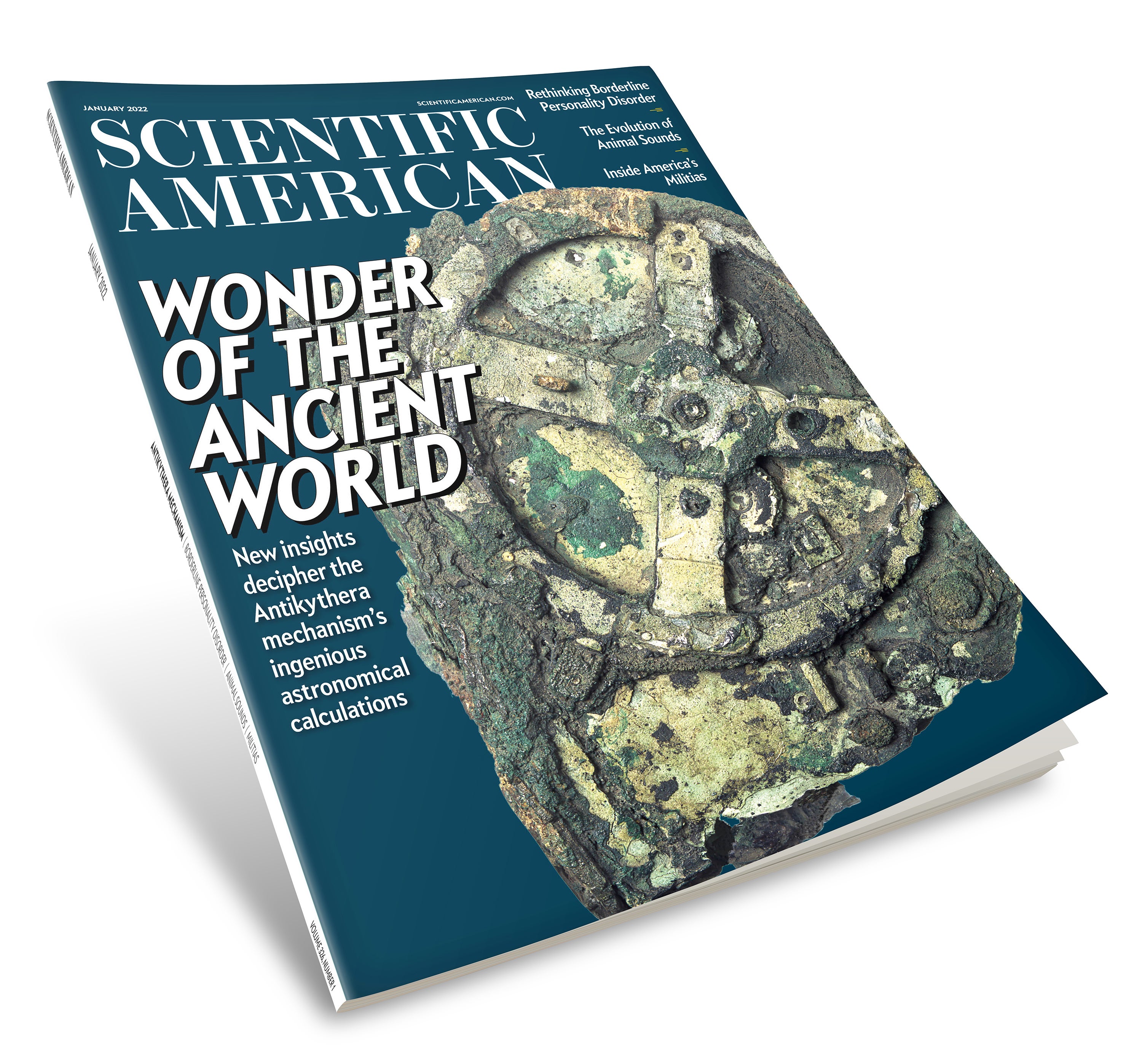 The Antikythera mechanism is one of the most astonishing discoveries in archaeology. Salvaged from a 2,000-year-old shipwreck in Greece in 1900, the intricately geared contraption was quickly recognized as a machine for calculating the movement of the moon and planets. It continues to surprise, as researcher Tony Freeth reveals. The gears are more delicate and complex than we knew when Freeth shared his team’s results in 2009, predicting more celestial events with precision and ingenuity.

This isn’t the first issue of Scientific American to share the Antikythera device on the cover; it was our lead story in June 1959 as well. That edition, available in our digital archives, is bursting with ads for new plastics—Marlex from the Phillips Chemical Company, Delrin from DuPont—asbestos fiber from Johns-Manville, rocket navigators from Northrop, and the “first all transistorized analog computer” for $4,000 from Electronic Associates, Inc. Many of these products are long forgotten, but the Antikythera (pronounced with stress on the syllable “kyth,” like “pith”) mechanism and research on it will probably outlast them all.

Going back much further in time, paleontologist Michael B. Habib takes us to the dawn of animal noises. The first buzzes from insects started around 250 million years ago, followed by vertebrates evolving the ability to produce and detect sounds, and then birds’ exquisite singing apparatuses. I found myself noticing and appreciating animal noises more than usual after reading the article, and it might give you a smile next time a squirrel chatters at you.

On January 6, 2021, when armed insurrectionists stormed the U.S. Capitol and tried to prevent the peaceful transition of power after the presidential election, Scientific American editors started reaching out to experts who could help us understand what was happening. Sociologist Amy Cooter has been studying militia movements for years, and she warned in an opinion piece we ran online last January that the risk of continued violence is high. Her revelatory piece explores the range and motivations of militia groups and the shift she and other experts have seen toward more extremism.

Algal blooms that contaminate sea life are becoming more common in Alaska (and everywhere), but unlike in other coastal states, there is no governmental monitoring system to safeguard people from potentially deadly shellfish. Now Alaskans, including many Indigenous people, are building their own networks of testing and monitoring stations to protect this crucial and traditional source of food. Follow along with journalist Karen Pinchin and photographer Kiliii Yuyan.

One of the most controversial diagnoses in psychiatry is borderline personality disorder. Experts have disagreed on how to define, classify and especially treat the condition. Now, as journalist Diana Kwon reports, research is connecting borderline personality disorder with certain types of post-traumatic stress disorder, which might remove some of the stigma from the diagnosis and reveal better ways of understanding and treating it.

Quantum physics tells us that we can’t predict exactly where a particle will, say, land on a screen. But stranger still is the fact that we also can’t predict when the particle will land. As author Anil Ananthaswamy explains, a new experimental approach that requires exquisite precision could time particles’ travel well enough to support “an underworld of unseen waves that guide particles from place to place.” Let’s hope the experiments are successful; the physicists involved say results could come in a year.